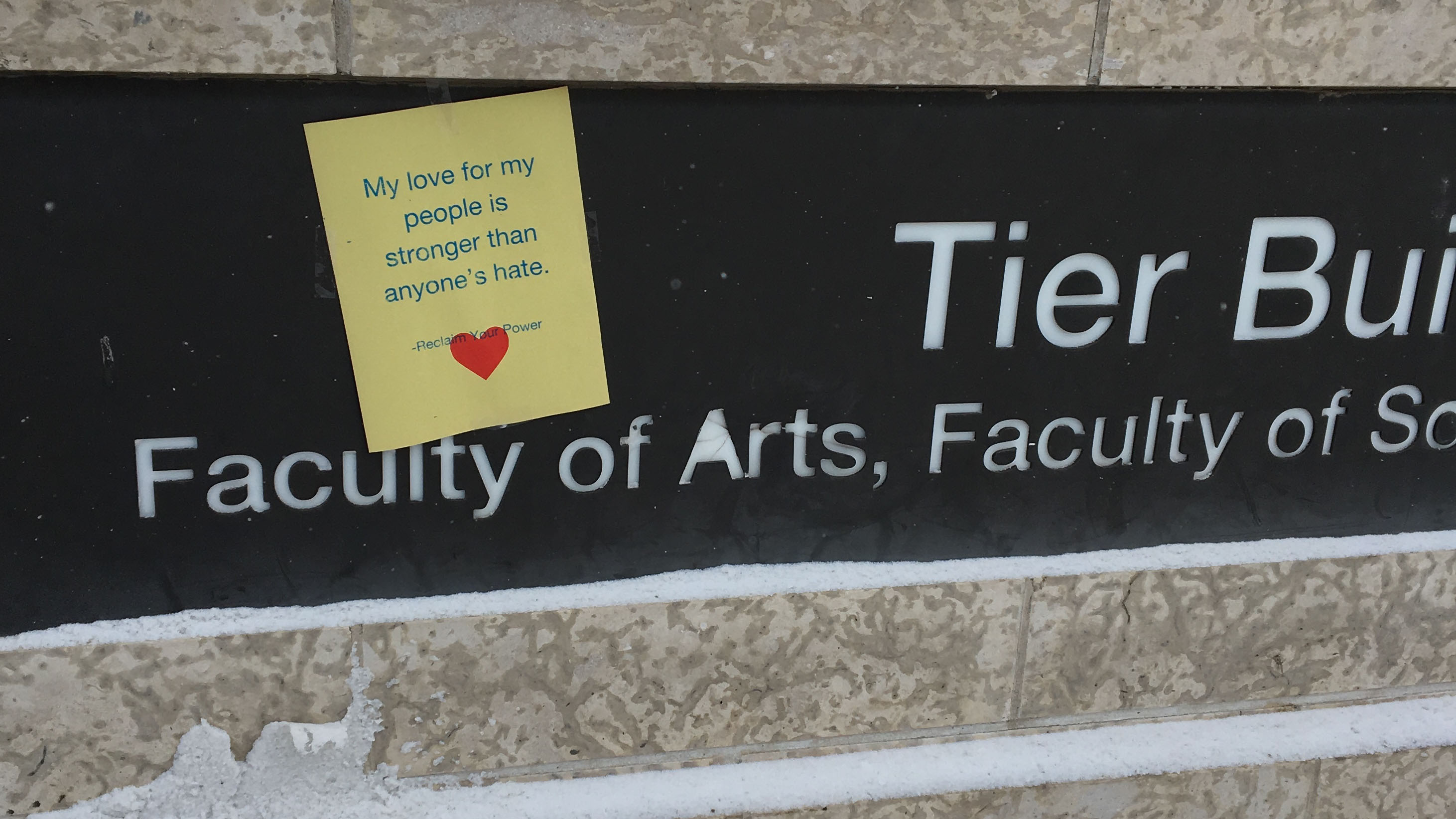 Members of the School of Fine Arts Students Association (SOFA) have led an initiative to create “counter-active” posters to “It’s Okay to be White” messaging that appeared on campus earlier this month.

Rather than hang the posters itself, SOFA gifted the artwork to members of the Muslim Student Association (MSA) and the U of M Indigenous Students’ Association (UMISA).

Beach said the posters were not just a response to the “It’s Okay to be White” posters, but also to recent instances of anti-Indigenous racism and Islamophobia.

“Mahri and I felt that it was appropriate to reach out to these groups individually, as well as the greater [Black, Indigenous and people of colour] community here on campus, and to decide on a message that we want to send,” she said.

The posters read “My love for my people is stronger than anyone’s hate” and “Reclaim your power.”

Beach said the poster’s phrasing was chosen to “apply to any sort of demographic on campus.”

“You could be German and recognize this poster and be like ‘You know what? I love my German people,’” she said.

UMISA education rep and music fest co-ordinator Kristin Flattery said the posters were “not a method of retaliation.”

“This was to spread a message of love around,” she said.

“Because we have all this hate being spread around campus, so we were trying to combat this in a more positive way by sharing love.”

Most of the posters have since been removed.

According to Flattery, security services took posters down from the Migizii Agamik building on the morning of Nov. 8 and “policed the entire building.”

“It shouldn’t be being removed, especially in a place that is safe to us,” she said.

“Art is freedom, it is creativity and it will create change in society faster than any other political movement ever could.”

Beach said a poster that had been placed on the SOFA door that same day was also removed but was unsure who took it down.

UMISA also had posters taken down from its bulletin board.

Security services director Rick Jansen said any removal of posters was a matter of U of M protocol.

“Any posters that go up on the university — unless they’re authorized by the building owner or UMSU depending on the building […] — we take them down,” he said.

“There’s a whole bunch of rules that they have to follow — how it’s affixed to the bulletin board or to a wall or what have you, they have to be indoors with a stamp [that says] they’re approved, otherwise we end up taking them down.”

Flattery said she believed security responded more quickly to the posters put up by members of UMISA and the MSA than they did to the original messages of hate posted on campus.

“It’s funny how they can so actively go around so quickly to remove our colourful messages of love, but it’s such an issue to get them to remove the messages of hate,” she said.

Most of the original “It’s Okay to be white” posters had been removed the morning they were discovered — however, there were also accounts of students removing posters themselves.

Jansen said security services was not targeting the SOFA initiative and security’s involvement was more about a recent increase in unauthorized postering on campus.

“We’re not targeting anybody whatsoever,” he said. “We’re a little more vigilant right now, if you want to use that word, just because there’s so many going up.”

He added security services does not condone acts of hate and had no desire to infringe on free expression.

“We get what the students are doing, and we’re not trying to curtail any free speech or anything, obviously we don’t condone anything whatsoever of racists or hidden agenda items or anything like that,” he said.

Beach said SOFA plans to make more posters, called the removal of the posters “unfortunate” and said the goal of the initiative is to provide a reminder that marginalized students are not alone.

“It’s just supposed to give comfort and support to students that go to class and have to deal with having to be a student, which is already so hard as it is, and then on top of that have to deal with violent messages and posters,” she said.

“So this was just an idea for SOFA to give back to the students and give them a sense that you’re loved, you’re safe on campus.”