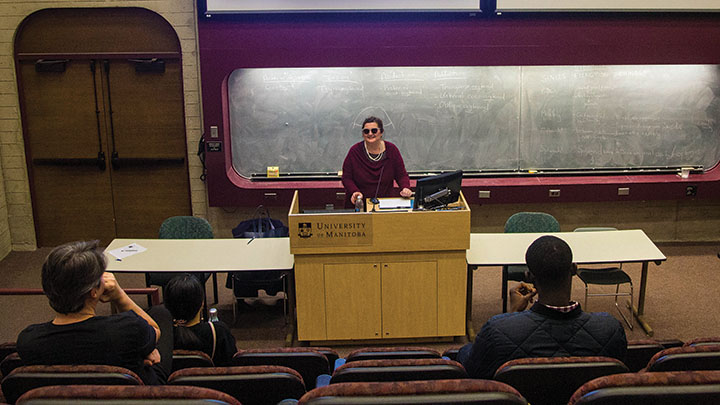 While the inherent vices of social media continue to make headlines, online patient support groups are making a strong case for the upside of social media.

Chair of the education committee of the Manitoba chapter of the Canadian Hemophilia Society (CHS) and U of M graduate Milena Pirnat gave a lecture on the Bannatyne campus Friday as part of the Bold Ideas Colloquium Series on the role social media can play in healthcare.

One group was explored in particular — the Facebook group Hemophilia Mother, which Pirnat founded. The group creates a virtual support space connecting patients and families of people with hemophilia and other bleeding disorders from around the world.

Hemophilia is a rare genetic condition passed from mother to child. Only males can be hemophilic, while females are carriers.

Due to the complete or partial absence of a protein clotting factor that normally helps the blood clot, hemophiliac patients bleed longer than others. The severity of hemophilia varies from mild to severe, with severe hemophiliacs bleeding spontaneously for no apparent cause.

There is no cure for the condition but prophylaxis — regularly administering blood-clotting treatment — and on-demand therapy promote the quality of life of persons with hemophilia. Hemophilia comprehensive care clinics, like the Manitoban chapter of the CHS, have a hematologist, registered nurses, social worker, physiotherapists and psychological service available by demand.

“Management and care is kind of dealt with through the system,” said Pirnat in an interview.

“But there is [still] a lot of coping strategies that are needed […] I thought that more is needed than just [learning how to infuse factors].”

When Pirnat considered what families dealing with hemophilia needed, it became obvious a wider support network was key.

“I thought maybe there was a need for patients to talk to patients,” she said.

Pirnat, herself a carrier herself with an adult hemophiliac son, recounted receiving the diagnosis of her son’s hemophilia in 1997.

“When I went through the process [of raising my son] I thought that often you might feel alone,” she said.

“This is a very rare disorder and so you don’t have people to talk about it and you don’t have anybody who would understand basically what hemophilia is about. That part for me, being an immigrant and being isolated and not having family and not having a support system if you have a child that has [this condition], I thought that other people felt the same.”

According to Pirnat, a virtual group where people can reach out, anonymously or otherwise, “ends isolation because this is a rare disorder.”

In her presentation, Pirnat characterized the types of questions and support messages members typically post.

“Most questions are [centered around] emotional support and educational,” said Pirnat.

Pirnat found despite the overall positivity within the group, some risks still exist, including concerns about privacy, members soliciting, selling and promoting treatments and unintentional but well-meaning medical advice that could be misleading. Pirnat recalled once being forced to deal with members soliciting other member posts to drive propaganda toward another page.

Pirnat ended her presentation by reading an anonymous letter she received from a member of the community from Turkey. In the letter, the woman — a carrier — recounted her experience receiving her son’s hemophilia diagnosis and expressed gratitude for the group’s support.

“It is helpful as emotional support, as mentoring for some people, as an education and practical advice,” said Pirnat.

“In a way, it does build a community and a platform for people to feel comfortable in it.”