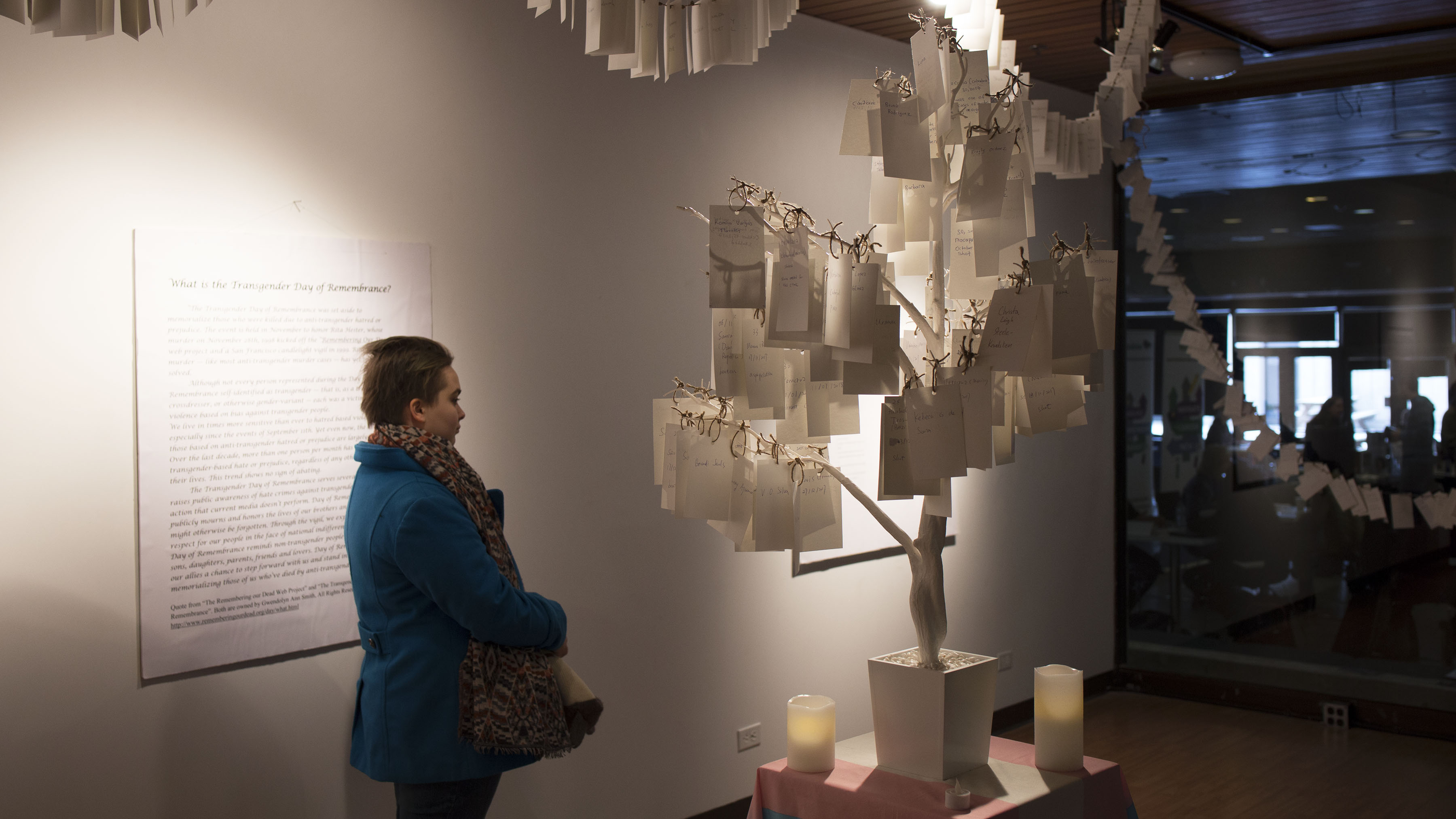 As part of Transgender Day of Remembrance (TDOR) campus events, a memorial service was held Nov. 20 honouring the lives of transgender people that have been lost to anti-transgender violence.

The service, hosted by Rainbow Pride Mosaic (RPM), was held at the Gallery of Student Art (GoSA).

The TDOR is held every year on Nov. 20 and originated in the memory of Rita Hester, a prominent figure in the Boston transgender community who was killed in 1998.

UMSU LGBTTQ* representative Eun-Bi Kang said the day “was set aside to memorialize those who were killed due to anti-transgender hatred or prejudice.”

During the service the names of the 368 transgender people killed in the last year were read aloud, followed by a minute of silence.

These names were incorporated into an installation at the GoSA, on display until Nov. 23. Strings of cards, each with the name of a transgender person who was murdered, were hung around the gallery.

“On the name cards we write the name on one side and then as much detail as possible that humanizes the person on the other side,” Kang said.

Between January 2008 and September 2018 the TMM tracked a total of 2,982 reported murders of transgender and “gender-diverse people” worldwide.

A significant number of these murders occurred in Central and South America. Between October 2017 and September 2018, 167 murders were reported in Brazil.

Kang spoke out about the recent election of president Jair Bolsonaro in Brazil during the memorial, expressing fear that the rise of right-wing movements in Brazil and around the world will incite new waves of violence against the transgender and the wider LGBTTQ* communities.

Recent events on campus, including the “It’s okay to be white” posters found on campus last month and pro-life campaigns throughout the term, had not gone unnoticed by the university’s LGBTTQ* community, said Kang.

“That generally makes transgender people feel rather uncomfortable and it makes me fear for the future,” Kang said.

On Thursday, RPM hosted a panel featuring transgender and non-binary speakers who shared their experiences.

“The point of the panel is to share what it’s like to be a transgender person,” Kang said.

“The physical, mental, social, legal and medical challenges that we face on a daily basis.”

In 2016, police reported a 25 per cent increase in hate crimes targeting sexual orientation compared to the year prior. According to Stats Canada, hate crimes in the country are also becoming more violent — meaning assault, threats and other violent offenses are on the rise.

Kang hopes working to bring public awareness to transgender issues will shed light for those who may be unaware of the particular struggles trans people face.

“My hope is that people who don’t really know what trans people are like, or what they have to go through, that they’ll attend the event, hear what these people have gone through and realize that they’re humans just like everyone else.”

Celebrating the complexities of queer culture