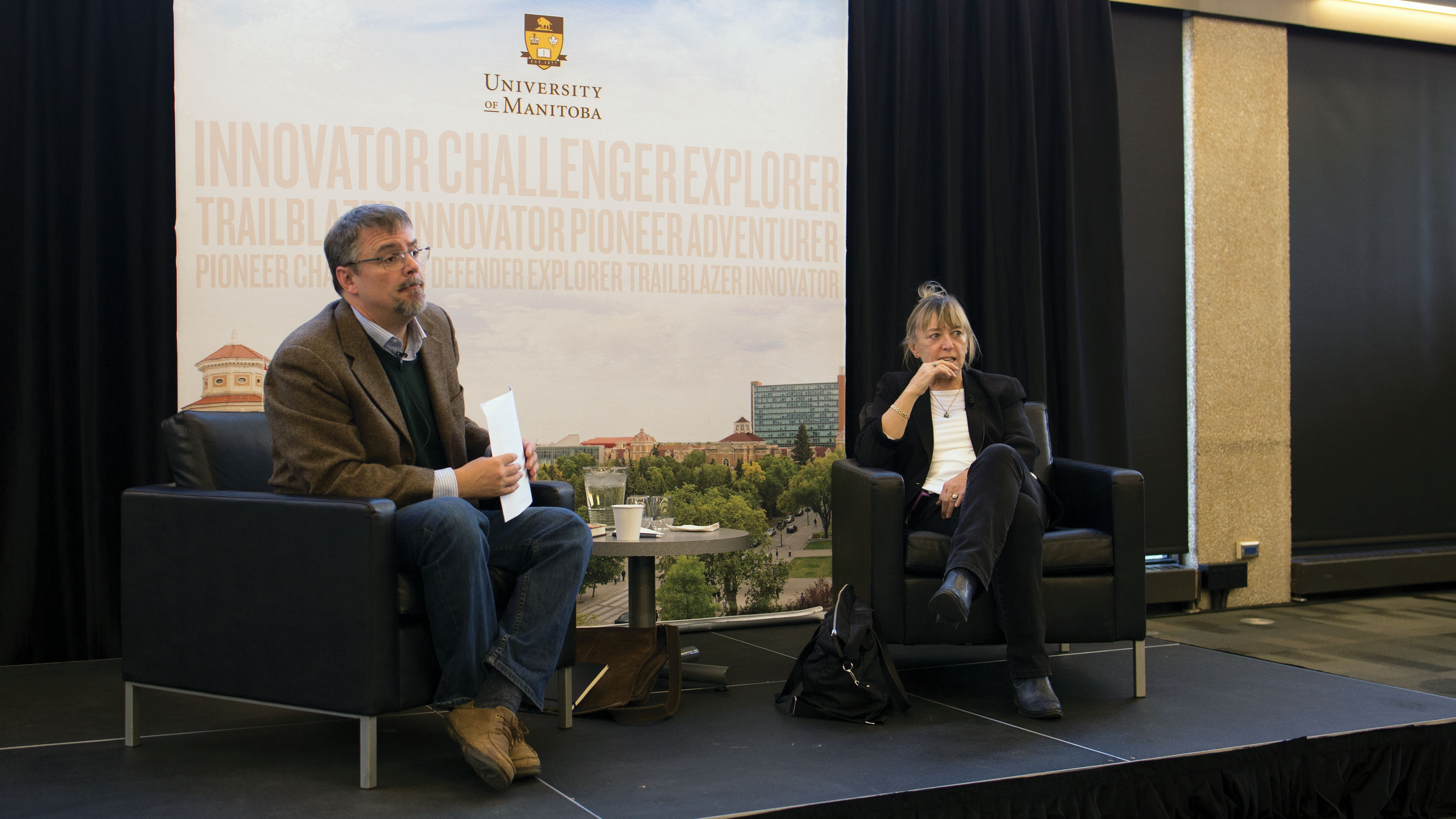 Nobel Peace Prize laureate Jody Williams visited the U of M to discuss the pursuit of peace in a question-and-answer session Thursday.

The session — moderated by Adam Muller, director of the U of M’s graduate programs in peace and conflict studies — was the first of two local events featuring Williams. It was followed the next day by a lecture at the Canadian Museum for Human Rights.

The university hosted Williams as its 2018 Robert and Elizabeth Knight distinguished visitor. The talk was part of the Sol Kanee Lecture Series on Peace and Justice.

During the session, Williams took questions about how to work toward societal change on a person-to-person level.

“The root of those words is to act. Taking action on something I care about.”

Williams has been a peace activist since the Vietnam War and is well known for her work as chief strategist and spokesperson for the International Campaign to Ban Landmines (ICBL). The organization was instrumental in bringing about an international treaty banning antipersonnel landmines known as the Ottawa Convention, which was signed in 1997.

The treaty was initially signed by 122 countries, a number which has since grown to 162.

For her work with the ICBL, Williams and the organization were jointly awarded the 1997 Nobel Peace Prize “for their work for the banning and clearing of anti-personnel mines.”

Williams was only the 10th woman in history to be awarded the prize. In 2006, she and other female Nobel Peace laureates founded the Nobel Women’s Initiative, which Williams said was created “to use the access and prestige of the prize to shine a light on the work of grassroots women around the world.”

During the Q-and-A, Williams talked about the hostility she encountered from male colleagues when she was awarded the prize.

“When it was announced that we had received the Nobel Peace Prize, and our campaign was huge, there were five people in the campaign who publicly attacked me for having the named individual, as if I had anything to do with the decision,” she said.

“All five were men.”

Williams said her feelings of disappointment at the Nobel campaign dissipated after founding the women’s initiative.

“I was very agitated with the Nobel prize personally prior to the Nobel Women’s Initiative, but now I feel like I’m sharing it with women all around the world so I’m happy to have it,” she said.

Williams also spoke about how people can bring about change and the importance of working together.

“It takes citizen pressure,” she said.

Solidarity, Williams stressed, is the key to feasible and productive activist work.

“These things are doable, but they’re doable when you reach out to other people who share the vision and the goal and you work together to make it happen,” she said.

“It’s the only way change happens. So whatever the issue is you want to work on, you find an organization working on it, or if it doesn’t exist, create it.”

Williams used her own journey to the Nobel Peace Prize as an example of the great power people can have if they collaborate.

“I contributed a small part in the landmine campaign, and together we changed the world,” she said.

“We, we, we, we. Hundreds and thousands of people from different walks of life contributed in their own way. We did it.”