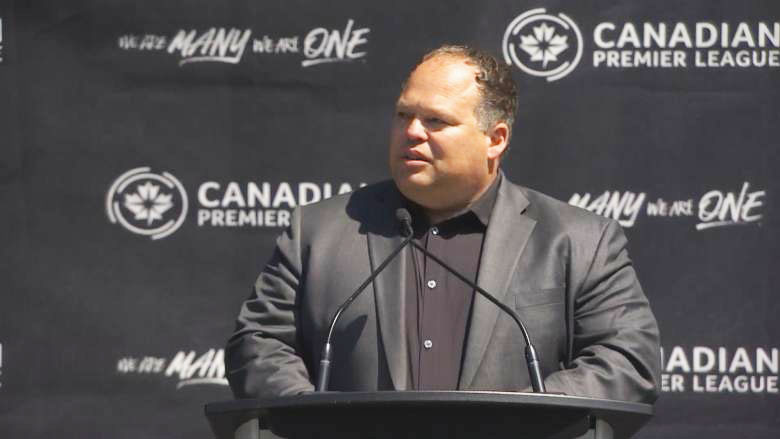 The professional sporting landscape in Winnipeg just got a little more crowded.

After more than a year of speculation by fans and media, Valour FC was officially announced during an event at Investor’s Group Field on June 6.

The team is one of five confirmed members of the newly formed Canadian Premier League (CPL) and will take to the field when the league officially opens play in spring 2019.

Valour FC will be operated by the Winnipeg Football Club (WFC), the same non-profit organization in charge of the Winnipeg Blue Bombers. During a press conference following the announcement, WFC president Wade Miller mentioned that the organization was adamant about bringing professional soccer to Winnipeg.

“We’ve been working on this for a long time,” Miller said.

“Over four years to get in at the start of the league, and I think it’s just great for Canadian soccer players and Manitobans that we’re going to have our own domestic league. The Canadian Premier League is going to be successful across the country and we look forward to having a great franchise here, Valour FC in Winnipeg, starting next year.”

Miller said Valour and the Blue Bombers will have a close relationship, but gave no specific indication on what the partnership will look like. He did, however, indicate that the organizational infrastructure already in place will be an asset.

“The benefit we have is that we already have that infrastructure for sports entertainment operations,” Miller said. “We’re able to really leverage our resources and be able to support both teams.”

The name Valour FC was inspired by the unique story behind Valour Road.

Three men from the same street in Winnipeg — Frederick William Hall, Leo Clarke and Robert Shankland — all volunteered to serve during WWI. Only Shankland survived.

All three were awarded the Victoria Cross and their street — Pine Street — was renamed Valour Road in their honour in 1925.

“Any time you can honour the military and honour what individuals have done, we’re going to take that opportunity,” Miller said. “I just think it’s fitting for the team in Winnipeg to be called Valour FC.”

The team will wear the colours “Valour Maroon,” “Wheat Gold” and “Earth Black.”

A point stressed by the speakers during the announcement was that the CPL will be “By Canadians, for Canadians.” League commissioner David Clanachan noted the league wants to develop “hometown heroes” and make the league the desired option for Canadian soccer players.

“We want you playing for this team when you grow up,” Clanachan said to the hundreds of youth players in attendance

It has not been stated by the league if they will ensure Canadian development through a domestic signing quota as in the CFL, however according to Miller it is not out of the question.

A domestic quota “is still being worked out, but this is a Canadian league so there will be Canadians and Internationals,” Miller said.

“That’s still what the soccer operations team across the country is working on, what those numbers should be, to put a very competitive and very skilled product on the field. And over time you’ll see that number grow of Canadians, so we’ll see where that ends up.”

There has been no mention yet as to how the league’s rosters will be filled out, with all teams starting from scratch. However, indications from the league website point toward walk-on tryouts being held, as well there will likely be direct scouting and signing by teams.

The U SPORTS opportunity

Unlike for the other major sports leagues in Winnipeg, the road to become a CPL player is not clearly defined. However, this may provide an opportunity for U SPORTS — and the U of M Bisons — to grow alongside Canada’s newest professional league.

There are currently 48 men’s soccer clubs in U SPORTS, providing a solid player base to draw from once the CPL begins drafting rosters.

U SPORTS is already a feeder system for the CFL, with 21 Canadian university grads on the Blue Bombers roster alone. Among the U SPORTS players are Bisons products Thomas Miles, Kienan LaFrance and Nic Demski.

Whether the CPL goes the same route remains to be seen.

However, with season ticket deposits approaching 700 heading into the weekend following the event, excitement is building around Valour FC.