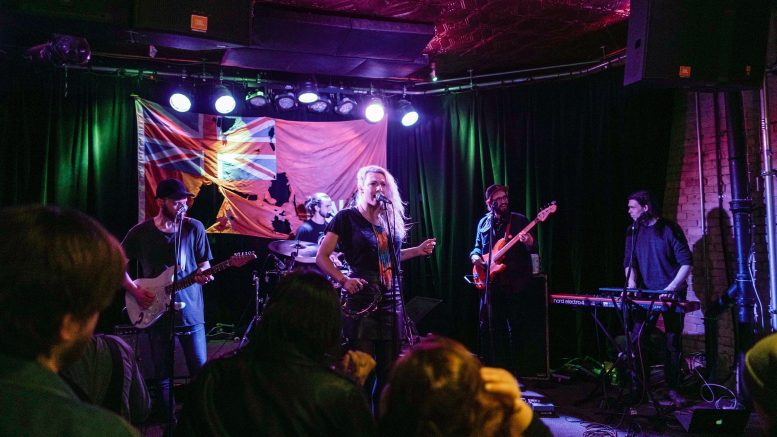 The King’s Head Pub and Eatery has found success in revamping their iconic Sunday night programming.

Local creators of Live at The Roslyn, the Village Idiots, have partnered with the Exchange District venue to host a small handful of local bands to play the weekly Sunday Night Revival. The King’s Head was once the go to spot on Sunday nights for live music.

“Sunday nights were originally an industry night where those that worked in the hospitality industry on busy weekends could come in and enjoy some great live music on Sundays,” said owner Chris Graves.

Graves said that his partnership with the Village Idiots has made the process of organizing the event easier and their knowledge of the Winnipeg music scene has brought together a group of young musicians that have filled in for the previous house band All the King’s Men who made Sunday nights at the King’s Head what it once was.

“We have a fantastic relationship with the Village Idiots. They are the main promoters of our Sunday Night Revivals,” said Graves.

“They are putting together Winnipeg’s best bands that play anything from originals to covers, with guest appearances on many Sundays, with some of the most accomplished musicians [and] artists in this city.”

The Village Idiots have also contributed to having a more accessible music scene for music lovers worldwide with Live at The Roslyn, a weekly online show that allows anyone with a Facebook account to watch live local music from the comfort of their own living room 8 p.m. every Wednesday.

The Sunday Night Revival is accessible to people who may not otherwise attend shows in the city in a similar sense – there is no cover charge, and music that starts and ends earlier than typical Winnipeg shows.

Jamie Buckboro, frontperson of local outfit Jivetown, is one of the bands that will be in the regular three-band rotation to play the Sunday Night Revival. The other two bands are Electric Feel and Brandon Transit Service. Buckboro said he couldn’t pass up playing the King’s Head .

“I used to go and watch All the King’s Men every Sunday and be blown away by the level of talent,” said Buckboro.

“When I heard there was an opportunity to carry on what they had created on Sunday nights, I jumped at the chance.”

Graves said that the event picks up on the old traditions of having a house band, All the King’s Men, play every Sunday and how important it is to keep the tradition alive.

“The King’s Head was that iconic place for years,” said Graves.

“It is important that the city of Winnipeg have the opportunity to experience the vibe and feel of our room on a Sunday with it filled with live music.”

The event has already been well received and Graves thinks the draw of Sunday nights at the King’s Head does not just stop at good music.

“The vibe on a Sunday at the King’s Head is difficult to put into words,” said Graves.

“It needs to be seen and felt. I believe everyone will have a unique experience and leaving wanting more.”

The Sunday Night Revival takes place every Sunday at The King’s Head Pub and Eatery. Cover is free, doors open at 7 p.m., and music runs from 8 p.m. to 12 p.m. Check the Village Idiots Facebook page to see which band will be playing each week.