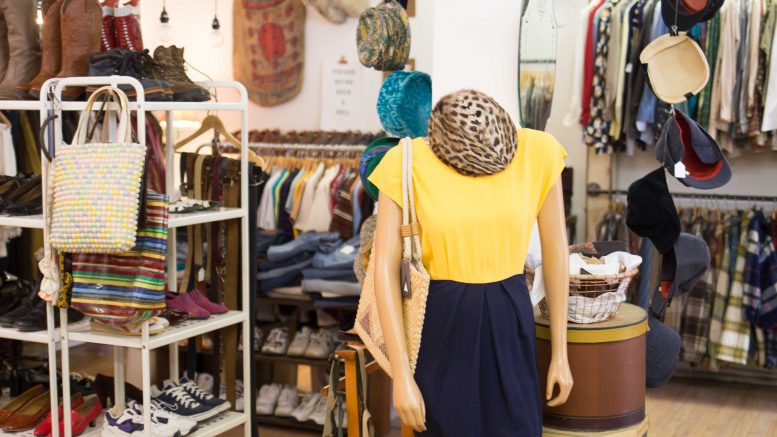 From collectors to business owners, several local entrepreneurs are making a go of selling their garment collections in curated vintage clothing shops.

Rachael Poklitar, owner of women’s vintage shop Nettie + Min, said she has wanted to own a vintage store in Winnipeg for years. She said she enjoyed thrifting for clothes in high school and realized during university that she could start selling some of her finds.

In 2012 she began selling clothes through a blog called “Lady Likeness.”

“I liked thrifting so much that I wanted to be able to buy whatever I wanted, even if I myself didn’t necessarily want to keep it or wear it, or it didn’t fit me,” Poklitar said.

“I could still do something with it, so that’s why I started selling it.”

Nettie + Min operates out of a studio at Unit 210 70 Albert St. and shares the space with curated clothing shop The Vintage Saint and two other businesses. The second-floor studio space is filled with racks of colourful vintage pieces, from dresses to brooches and from shoes to denim jackets. Carly Lane in a vintage jacket from Vantage Vintage Studios, one of the four businesses sharing the studio at 70 Albert St.

Poklitar said sharing the space with other businesses is an economic choice.

“We all split rent evenly, and if you’re here, you sell everything,” Poklitar said.

Out of the four businesses that rent the space, Poklitar is the only renter that works full-time at the studio, but occasionally she will work contract jobs on film sets. She said sharing the studio space offers her flexibility to work other jobs.

Alex Kohut, owner of men’s vintage shop The Vintage Saint, said he is happy with the collective nature of the studio arrangement as well. He began selling vintage items around the age of 17 and worked at local vintage shops Ragpickers and Vintage Glory before opening an operation of his own.

“I think, for me, I kind of follow in the footsteps [of people] who have been doing vintage for so long in this city,” Kohut said.

“The idea was that I had to accrue this knowledge that you can’t just learn from textbooks because there’s a lot of social aspects to buying and selling and trading and networking.

“So, it became a practice of learning how to navigate people in this business.”

Kohut and Poklitar have shared the studio space on Albert for approximately two years. Kohut said he hopes to expand in the future.

“I’m just not able to be there full time to reap the benefits of being fully in control of my business, but I’m happy with where it’s at and with the people I work with,” Kohut said. Melissa Chambers tries on an outfit from Vantage Vintage Studios.

Poklitar said she enjoys the freedom independently operating her own business offers her. She said she found starting Nettie + Min offered her a creative outlet while working a full-time job with the City of Winnipeg.

“It was a hobby-turned-business, and it kind of let me do other stuff like take pictures and model, and, I don’t know, let me be creative,” she said.

“I was also trying to make stuff and do whatever I could to get that out because the work I was doing was not very creative.”

Vintage clothing stores have been part of the Exchange for over a decade. Vintage Glory owner Doug Shand has owned and operated a vintage clothing and accessory store in Winnipeg since 2008, when he and his late wife opened the shop in a unit underneath antique furniture store, Hoopers.

The couple had previously owned a skateboard shop and understood how much work it took to own a business.

“It was a lot of work, full-time, and you put your heart and soul into it,” Shand said.

Vintage Glory is currently open at 380 Donald Street in the Exchange District. Like Poklitar, Shand began selling clothes after collecting for years. Doug Shand in his shop Vintage Glory at 380 Donald St. Shand has been at this location
for 6 years.

“And then once you go past the point of collecting, then you start selling it. There’s a point where people make up in their mind that they’re going to start selling their collections. And then as soon as you start selling, well you make extra money, and then you go buy more of the same thing. So it’s a continuous process.”

Kohut says that the community is tightly knit, and they help each other out in many ways, including aiding in the creation of new businesses.

“People have been discovering it too over the last 10 years and, starting out small, you search out other people,” said Kohut.

“So I’ve worked out this great network and I know all the dealers in the city who have spaces and we’ve given opportunities to people who are starting out.”