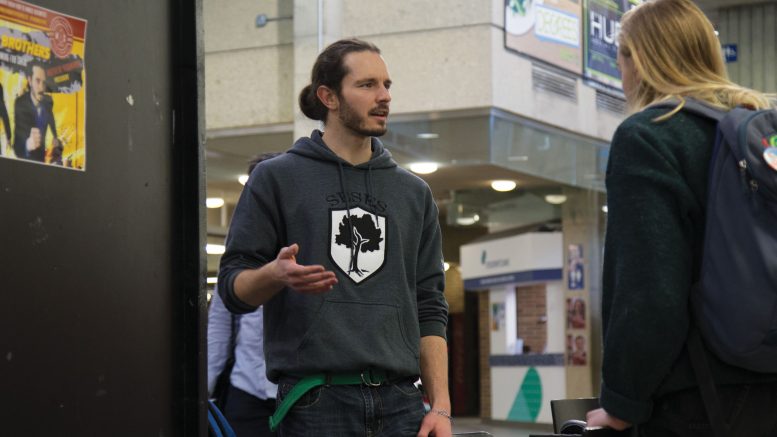 Two Brothers UMSU – consisting of brothers Mathew and Sean Scammell, who are running for UMSU president and VP student services, respectively – is promising to avoid pestering students for a vote and instead giving those who wish not to be approached by candidates during the campaigning period “hassle-free buttons.”

The brothers want to increase voter participation by awarding students who vote with $5 gift cards to UMSU businesses, an incentive they will commit to if elected.

They have also pledged to donate a total of $5,000 from each of their salaries towards an “innovative student initiative.” An UMSU committee would be formed to decide the criteria for student projects and review submissions.

The slate plans to introduce a conflict of interest policy in the UMSU bylaws, whereby a “cooling off” period would be implemented, preventing UMSU’s elected executive members from taking on paid positions within a political party following the end of their term for a period of one year.

Sean explained that a conflict of interest policy would help in avoiding the use of UMSU executive positions as a way of pursuing personal interests in place of the students’ interests.

“This conflict of interest is most prominent when negotiating with provincial or federal governments, as the individual may sacrifice a key opportunity to benefit the students, in the interests of preserving their future political career,” Sean added.

Mathew and Sean wish to promote sustainability on campus through working with the university’s Office of Sustainability, re-establishing the UMSU sustainability committee, and raising awareness of its activities, and encouraging student campus engagement.

To advance their sustainability objectives, the duo also plans to collaborate with the municipal government and Winnipeg Transit to revamp areas of inclusion for opt out options of the U-PASS.

“Sustainability is an area that a lot of students take seriously, as represented by the number of student groups and events on campus relating to sustainability,” Sean said, adding that the benefits of sustainability are long-term.

“A large organization such as UMSU has both the capital, and the system in place, to easily achieve large improvements in sustainability,” he said.