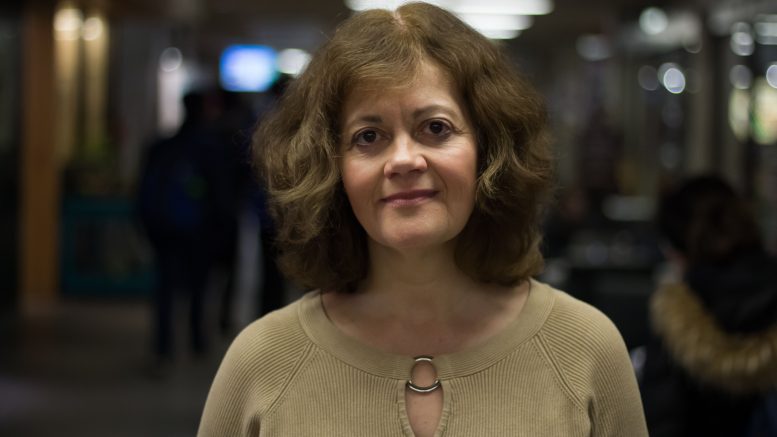 UMFA president, Janet Morrill talks to the Manitoban about the three priorities set forth in the UMFA letter to University President, David Barnard.

The University of Manitoba Faculty Association (UMFA) is urging university administration to increase full time academic staff, increase funding for students enrolled in graduate studies, and to invest in a day care space closer to the Bannatyne campus.

Morrill said the priorities were identified by UMFA members during consultation sessions leading up to two bargaining sessions with the University of Manitoba administration.

“We can deal with many member concerns in collective bargaining,” she said.  “However, others are a question of how the university spends its resources and sets it priorities, which have profound implications for faculty, staff, and students.”

The letter also expresses the association’s disappointment with the provincial government’s 0.9 per cent cut to the U of M’s operating grant and its recommendation that post-secondary institutions explore other ways to generate revenue, including tuition fee hikes.

Last November, the provincial government passed legislation that allows post-secondary institutions to raise tuition fees by up to five percent plus inflation annually, beginning in the fall of 2018.

The letter recognizes that the likely tuition fee increase will make up for the shortfall in operating grants, and urges the U of M to invest in the priorities identified in the letter.

“We expressed these concerns in an open letter to ensure they were heard by administration, and to encourage other members of the university community to voice their opinions as well,” Morrill said.

The letter expresses concern regarding the administration’s decision to spend budget surpluses on capital projects as opposed to investing in “core functions of teaching and research.”

Danakas said the university is committed to faculty renewal and retention.

“We believe that the implementation of the new budget model will allow deans greater flexibility in planning for the recruitment of new faculty members,” he said.

The new budget model – approved by president Barnard in 2017 – aims to increase transparency by allocating funds directly to faculties and departments for use as they see fit.

Danakas said the inter-fund transfers – resources allocated for a particular designated purpose – account for “accounting adjustments” for capital assets that are “useful” and “acquired using operating funds but recorded as assets as a result of their enduring value.”

This, Danakas said, results in an inter-fund transfer to the asset fund.

“The university has prioritized capital spending over classes for years,” Morrill said in an interview.

“We see larger classes, many students having to register in distance sections when they prefer an in-person option, fewer course offerings, and more classes taught by overburdened sessional instructors.”

According to UMFA’s letter, the U of M held a surplus of approximately $102 million for the budget year ending in March 31, 2017, which was transferred internally for capital projects or is “earmarked to be spent on capital in the future.”

“That is a huge surplus,” Morrill said. “We believe more of it should be spent on paying faculty competitive salaries. We should ensure that faculty have permanent positions to give them the academic freedom needed to fulfil their teaching, research, and service responsibilities properly.”

“UMSU and UMFA have a lot of room to work together as long as we are operating on the same path and the same goal,” he said. “We will most definitely need more faculty support to make education more affordable for students, too. I look forward to discussing this with UMFA and I kind of challenge them to be of assistance after this.”

Danakas said the university’s response to the letter will highlight the importance the U of M places on supporting students enrolled in graduate studies – which he said has been accounted for in U of M’s advocacy efforts on behalf of students to various levels of government and in budgetary decisions made by the U of M.

“In 2016-17, we distributed almost $10.5 million to graduate students via our internal funding programs and we have every intention of continuing to grow the funding available for this function,” Danakas said.

“Several potential sites have been evaluated but have not been determined to be appropriate, either due to size, location, or cost to renovate to meet provincial code.”