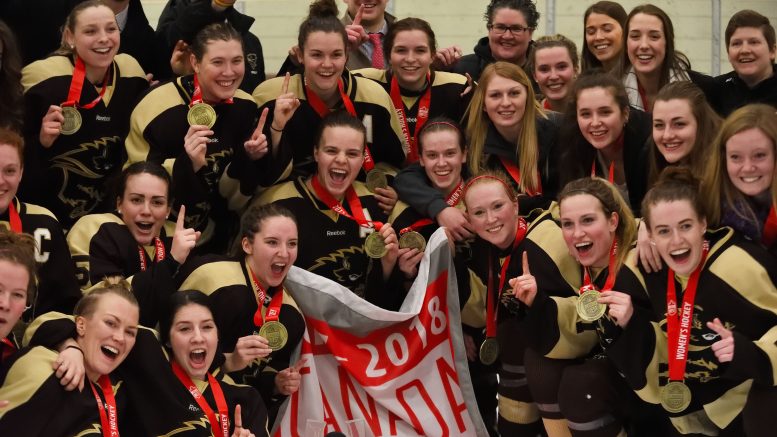 The best women’s hockey programs will meet in London, Ont., this weekend for the U SPORTS Women’s Hockey Championship.

Below are the eight teams that have punched their ticket to the dance, with a preview of what each of those teams bring with them from their respective seasons.

The X-Women were an offensive powerhouse in the 2017-18 regular season, ranking first in Canada with 3.29 goals per game. They entered the Atlantic University Sport (AUS) playoffs with a 9-1 record in their last 10 games played. The one loss? A 5-0 shutout at the hands of the Saint Mary’s Huskies, the team that eventually bested them in a three-game series for the AUS crown. The X-Women, despite seeing their goals per game drop to 2.00 in the playoffs, have an offensive talent in fifth-year forward Daley Oddy, who took home the scoring crown in U SPORTS for the regular season with 31 points.

Saint Mary’s captured its third consecutive AUS title against the aforementioned X-Women, and entered the AUS playoffs on an 11-game winning streak. They looked like they had no plans on stopping as they swept the St. Thomas University Tommies in the semifinals, but finally took a loss in game two of the AUS finals in overtime after a turnover and a breakdown on the backcheck. Third-year goaltender Rebecca Clark has helped backstop her team through five games to a championship with a 1.57 Goals Against Average and a .922 save percentage. She earned a shutout in the decisive game three against the X-Women, and took home playoff MVP.

The Stingers claimed their first Quebec Student Sport Federation (RSEQ) title since 2005 thanks in part to a team that started to get hot entering the playoffs. As they finished February outscoring opponents 20-11 for the month, veteran forwards Claudia Dubois, Audrey Belzile, and Stéphanie Lalancette continued to make their presence felt. Through six games in the RSEQ playoffs Dubois finished with two goals and three assists, Belzile put up three goals and three assists, and Lalancette had two goals and three assists. Goaltender Katherine Purchase has also showed she is riding a wave through the playoffs. After finishing the regular season with some shaky numbers, she turned it up for playoffs with a 1.26 GAA, .942 save percentage, and one shutout.

Winners of the 2016 championship, Montreal will look to get back on top this year. One thing to look for is whether the Carabins will make the switch to their rookie goalie Maude Trevisan. Fifth-year starter Marie-Pier Chabot has looked shaky so far, as her 2.95 GAA and .881 save percentage in the RSEQ playoffs reflect. Trevisan played only nine games in the regular season, but put up a 1.38 GAA, .940 save percentage, and three shutouts. Despite this predicament, the Carabins boast the top two RSEQ regular season scorers in third-year forward Alexandra Labelle and fourth-year forward Jessica Cormier, who put up six points and four points respectively through six playoff games.

No. 3 — University of Western Ontario Mustangs

Hosts Western entered the Ontario University Association (OUA) playoffs on a six-game winning streak and subsequently swept both the University of Toronto and the University of Guelph in two games each before shutting out Queen’s University in dominant fashion with a 3-0 win to take home the McCaw Cup. After putting up a relatively meagre 10 points through 22 games, second-year forward Alyssa Chiarello found another gear in the OUA playoffs, scoring four goals and three assists in five games. Rookie goaltender Carmen Lasis also found her groove, with a 1.04 GAA, a .963 save percentage, and two shutouts.

Queen’s finished the regular season as the top team in the OUA but had nothing to show for it as they were shutout in the McCaw Cup at the hands of Western. Third-year forward Katrina Manoukarakis finished the regular season as the OUA’s top scorer as she finished with 30 points, tied for second behind Montreal’s Oddy for top scoring in all of U SPORTS. Through six playoff games, however, Manoukarakis only scored once. This “cooling off” trend might be a cause for concern for a Gaels fan, but fourth-year goaltender Stephanie Pascal has done her best to calm those worries. Through six games Pascal has posted a 1.15GAA and .958 save percentage.

No. 7 — University of Saskatchewan Huskies

The Canada West finalist Huskies enter nationals with a formidable team, and it is hard to overstate the talent and experience of fifth-year forward Kaitlin Willoughby. Willoughby almost single-handedly brought her team back in the 5-2 game two loss in the Canada West final to the University of Manitoba, scoring both goals to bring the Huskies to within one at the time. Saskatchewan also boasts one of the top goalies in Canada in third-year Jessica Vance, who through four playoff games finished with a 1.45GAA and a .945 save percentage.

No. 1 — University of Manitoba Bisons

Manitoba capped off an incredible season with a Canada West championship, and despite finishing in the middle of the pack in all of U SPORTS with only 2.32 goals per game, you do not need to score prolifically when you play in front of a brick wall. Rookie goaltender Lauren Taraschuk took the reins in the playoffs posting a 0.54 GAA, a .969 save percentage, and two shutouts. Playing in front of her is well-rounded offence that sees the potential to score from any of the Bisons’ four lines. One player of note is 2018 Olympic bronze medalist Venla Hovi. With the grand stage in sight at nationals, one can only imagine what Hovi will bring along with the rest of the team that has looked even better since she returned.