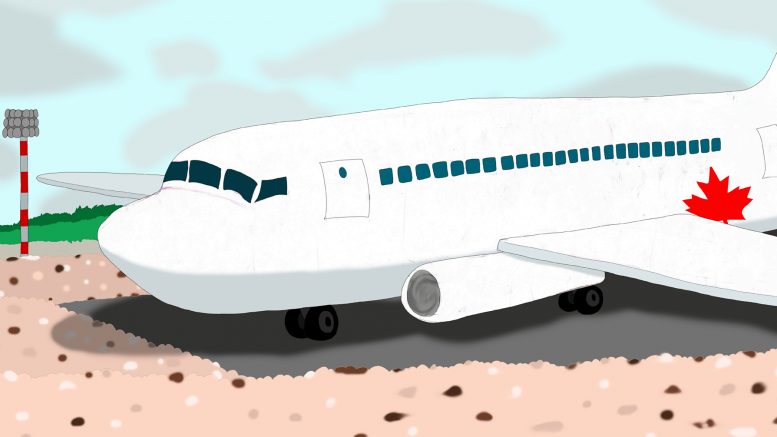 You don’t need to have seen The Twilight Zone to know there is a horror in traveling by plane.

Examples range from women being kicked off of planes for wearing leggings, to a doctor being roughly and forcibly dragged off a plane for not giving up his seat on an overbooked flight, to a passenger forced by a United airlines flight attendant to put their dog in an overhead luggage container – leading to the dog’s death from suffocation.

These experiences are only the tip of the iceberg. What fails to receive the attention it should are the notorious fees and delays of the airline industry, which, when compounded together, are sure to provide a painful experience for every passenger on every airline, even in the absence of unusually abusive treatment.

The most notorious corporate airline activity is the practice of overbooking flights. Airlines, to maximize profits, play a percentage game based on the number of passengers who are statistically predicted to not show up for a flight. As it stands, when that calculation is ultimately off, passengers are forced to give up their seats – and the airline will look after booking them on a different flight.

Although airlines do offer varying levels of financial compensation, a mere sum of money is not enough to justify the emotional turmoil of having one’s travel plans sent into a tailspin.

Delays are not covered by the same, albeit imperfect, compensatory airline policy. In Canada, based on archaic measures such as Flight Rights Canada, no airline is legally obligated to give passengers any compensation for any delay.

The absence of government intervention has failed passengers and citizens in the airline industry. In the U.S., the four largest airlines control 80 per cent of total domestic traffic. Lack of competition plausibly results in passengers having the choice of just one airline to some destinations.

This is why talks of a boycotting of United Airlines have been completely senseless. It is challenging to boycott an airline when there are situations in which it is the only airline which will fly to your destination.

In Canada, all airlines follow Flight Rights Canada, which is simply an unenforced code of conduct for airlines. In only giving consumers several major airlines to choose from, all of whom have an understanding that the passengers’ interests are not necessarily the best interest of their shareholders, passengers time and again lose out.

This is why, when federal Minister of Transport Marc Garneau introduced a bill in May of 2017, things were looking up. The bill was supposed to be a bill of rights for passengers. Unfortunately for travellers, the bill was not delivered as promised. Almost a year later, its true colours are being shown.

Bill C-49, or the Transportation Modernization Act, in many ways actually rolls back passenger rights. Some rollbacks include tarmac delays – which were originally capped at 90 minutes in the current legislation – increasing to three hours before any compensation is required should the delay fall outside the carrier’s control. This means a passenger can be delayed in their seat with no food or water for up to three hours, all without any financial penalty to the airline, insofar as the airline can justify the delay by appeal to external factors.

The bill does not require airlines to compensate for delays which are caused by “mechanical malfunctions” or “safety purposes.” We all want to be safe while flying. However, what is problematic is that this gives airlines the space to lump any delay into one of those two categories, allowing them to easily avoid forking over any form of compensation.

Startlingly, the further down the rabbit hole you go, the more this all makes sense. Transport Canada is supposed to protect consumers from airlines. However, through its recent action – and lack thereof – it has been clear that Transport Canada and the airline industry have an alarmingly close relationship.

The issues of Transport Canada begin with a mindset divorced from reality. The regulatory body is always the first to issue statements such as, “Canada’s airlines are among the best in the world,” with zero evidence to support such a boisterous claim. In airline customer satisfaction surveys, Canadian companies rank near dead last.

If that were not enough, statistics show Transport Canada gets over 500 formal complaints a year from air passengers. Yet, the number of cases that actually get acted on has dropped significantly – from 230 in the years 2013-14 to a pitiful 64 in 2015-16.

When the minister of transport is asked why he cannot do his job and protect consumers, he has one word: competitive. Canada’s airlines must be competitive.

However, it only takes a flight to Europe to dispel that notion entirely.

Since the legislation took effect in 2005, the Flight Compensation Regulation has been protecting every air passenger flying out of Europe. The concept is extremely simple: the regulation requires compensation of between 250 and 600 Euros, depending on flight distance, for delays over four hours, cancellations, or being denied boarding from overbooking. And mechanical malfunction is not a valid excuse.

Yet, European airlines are still competitive.

If the minister of transport was serious about protecting consumers, he would use the regulation in Europe as a framework for Canada. There is no need to reinvent the wheel when regulations already in place are clearly working for the rights of passengers in Europe.

Above all, one thing is certain: it should not take constant protest, email campaigns, and lobbying to urge Transport Canada to do its job – protect airline passengers, not the airline industry.