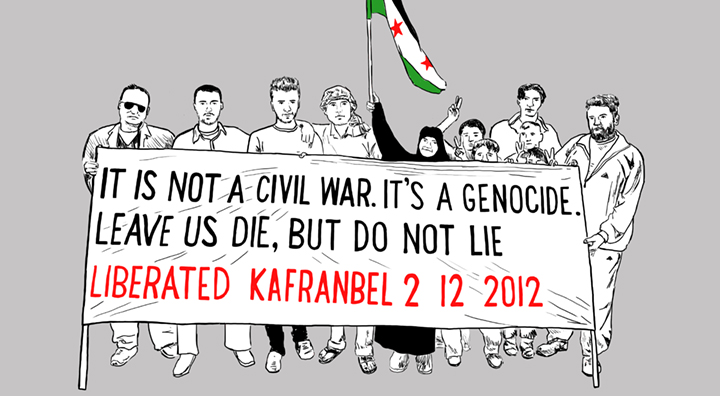 Having now completed its seventh year, the Syrian conflict, one of the deadliest humanitarian crises of our time, continues to be characterized as a civil war.

Such a categorization, however, is both inaccurate and troubling, as it simplifies a very complicated situation.

It allows us to become disillusioned with the idea that problems “over there” are just that and have no impact elsewhere, resulting in a collective numbness and shrugging-of-shoulders when images of war-torn Syrian cities and towns (too rarely) dominate our front pages.

Such a simplification is dangerous.

It exonerates the international community of responsibility, producing global apathy. It allows internal and external groups to justify their involvement and use of violence, fails to acknowledge the direct and active role of powerful players like Russia and Iran, and gives Syrian president Bashar al-Assad a facade of legitimacy by equating the killer  with the victims.

Undoubtedly, it is difficult to reduce what is happening in Syria to mere words printed on paper, but it is important that we peel back the many layers surrounding this conflict in order to develop a deeper, more contextualized understanding of it.

In March 2011, following decades of stagnation and oppression, a sudden awakening of a disenchanted Syrian populace – one which had lost patience with a failing, anocratic state – swept through the nation when a group of teenagers were arrested and tortured in the southwestern Syrian city of Daraa for painting graffiti featuring messages in support of the Arab uprisings.

Daraa’s consequent rallying cry for the release of the boys was met with a ferocious crackdown of security forces, who reverted to the logic of violence by killing and detaining innocent civilians.

Struggles for freedom, economic woes, and public anger over harsh government retaliation resulted in a shift in chants from local and reformist demands, to a call for the complete overthrow of the Assad regime.

Armed resistance against the Assad regime grew in the form of self-defence as soldiers began defecting from the Syrian military via YouTube videos following the summer of 2011. This led to the birth of the Free Syrian Army, marking the weaponization of the conflict.

By the following year, it became clear that militarization had overshadowed the original nature of the Syrian uprisings – peaceful demonstrations against authoritarian rule – creating a power vacuum and making room for the interference of criminal gangs and interventionist foreign powers, ultimately giving way to open barbarism and poisonous propaganda.

There are local factions that fight against one another from time to time – still, the underlying power dynamic between the regime and the Syrian people is one that is too convoluted to be characterized as a civil war.

We see this in the arbitrary violence perpetrated by the Assad regime against a helpless populace.

Soldiers were forced to shoot unarmed demonstrators or were shot themselves. Stadiums and school classrooms were turned into prison camps where mutilation and torture of the worst kinds imaginable were inflicted on men, women, and children, including the elderly and wounded. Public rape, forced starvation, aid obstruction, and indiscriminate executions were used as instruments of warfare and deterrence.

This degree of atrocities deployed against a largely unarmed population failed to suppress rebellion. The regime’s survival strategy – one of oppressive tactics and its attempt to blame sectarian divisions and foreign conspiracies for the violence – proved ineffective.

And so, in a deliberate attempt to aggravate the conflict and radicalize what remained of formerly peaceful  demonstrations, Assad released dangerous extremists from prison – a number of whom now compose the majority of ISIS leadership. This has helped him shift the narrative, emphasizing so-called Islamic terrorism as a key characteristic of the conflict, thereby presenting himself as a partner in the global war on terror and justifying his use of violence.

How can we refer to the conflict as a civil war, given the vast amount of external interference?

Foreign powers have prioritized violence and significantly exacerbated the conflict.

Following the outbreak of demonstrations in 2011, Shiite fighters from Lebanon, Iraq, and Iran were immediately deployed in Syria to support the Assad regime.

Moscow has also been integral to Assad’s survival. Since 2015, Russia has been launching airstrikes targeted at Syrian rebel forces, which often entails targeting Syrian neighbourhoods, hospitals, and schools.

The most brutal bombardments are currently being carried out by pro-government forces in eastern Ghouta, an agricultural, rebel-held enclave located in the northern Damascene countryside that has been under siege since 2013 and is home to an estimated 400,000 civilians. Since mid-November, over 1,200 air strikes and more than 6,000 rockets and shells – some of which have reportedly contained chlorine gas – have been fired at the enclave. This is despite the fact that eastern Ghouta was declared a “de-escalation zone” last May; that is, the region is under a diplomatic ceasefire agreed to by Russia, Iran, and Turkey.

The death toll in eastern Ghouta continues to rise. In a one-week period earlier this year, the number of casualties exceeded 500, with thousands  of civilians severely injured. Relentless air and artillery strikes have forced civilians to seek shelter underground and has left the region largely deprived of medical care, foodstuffs, sanitation, and other basic necessities.

The conflict has produced well over five million refugees and six million have been internally displaced – more than half of the country’s pre-war population. More than eight million children have been affected by the conflict and over 13 million Syrians are in need of immediate humanitarian assistance. Nearly half a million people have been killed, more than two million injured, and more than 65,000 have disappeared in Syria’s torture prisons.

This is a war carried out by Assad and his foreign allies against the people of Syria, a murderous campaign to exterminate a nation in order to maintain a long-standing power dynamic in the region.

Do not equate the killer with the victim.

This is not a civil war.

The revolution will not be classicized