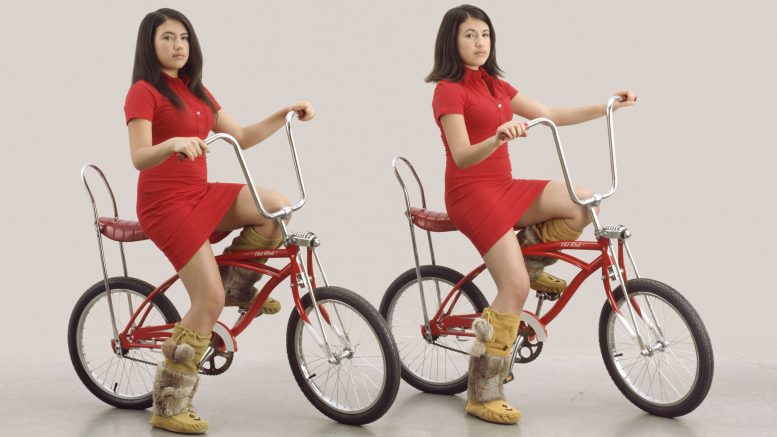 More than 160 billboards featuring artwork created by 50 Indigenous women artists will be displayed on highways and cities across Canada beginning June 1.

Resilience will take place until August 1, 2018. The public exhibition will be the largest exhibition of art made by Indigenous women in Canada to date, according to Mentoring Artists for Women’s Art co-executive director Shawna Dempsey. Dempsey was one of the people who helped come up with the project and said she was determined to make it possible.

“We conceived of it and fundraised for it in collaboration in with the curator, Lee-Ann [Martin],” Dempsey said.

“It was incredible that we got the funding. The project budget is larger than our annual budget.”

The project is funded through the Canada Council for the Arts New Chapter program, which was originally intended to fund art projects centred on Canada’s 150th birthday in 2017.

Dempsey said they deliberately chose to release the project in 2018 to avoid the year of celebration.

“The resistance of Indigenous women predates colonization and will go on long after, and we didn’t want to situate this project in the colonial narrative,” Dempsey said.

The public exhibition is in response to the Truth and Reconciliation Commission’s Calls to Actions, the 79th of which states, “We call upon the federal government, in collaboration with Survivors, Aboriginal organizations, and the arts community, to develop a reconciliation framework for Canadian heritage and commemoration.”

The Truth and Reconciliation Commission of Canada released the report and calls to action in June 2015. The report is the result of six years of testimonials from over 7,000 people, including residential school survivors.

Resilience curator Lee-Ann Martin said the term “resilience” refers to the strength of the women behind the artwork featured in the project.

“Resilience embodies the endurance, sovereignty, and adaptability of these women as they stand as defenders of their cultural sovereignty and protectors of the land,” Martin said.

“The idea is to celebrate the diversity and art of Indigenous women artists, who have been underrepresented and excluded in the art community and in society in general. The artists are multi-generational, from emerging to established, and from all across the country.”

Local artist and University of Manitoba fine arts graduate Jackie Traverse will have a piece in the project adapted from her mural at 141 Sherbrooke avenue, which depicts Mother Earth with sweetgrass for hair.

Traverse said she is happy the project is happening, and feels honoured to be a part of it.

“There’s 50 different artists, we each bring a different perspective to this project. There’s going to be a lot of dialogue created,” Traverse said.

“We need to be heard and [Indigenous women] haven’t been heard in such a long time and I think art will unite us all.”

Resilience is a public exhibition by design. Billboards across the country were chosen as the exhibition medium instead of a gallery space, a choice that ensures that people of all backgrounds will be able to see the pieces.

“Lots of people will see it who would never set foot in a gallery,” Dempsey said.

“Our images are evocative. They’re not like advertising images that are quick and easy to understand, so we hope people will wonder more about them.”

Martin is also hopeful that the public nature of the exhibition will allow the art to inspire many different people.

“We’re hoping that the public who see these images across the country will be inspired by the diversity and complexity of their art,” Martin said.

“Billboards have proven to be effective tools for messages that are seen and remembered by broad, diverse audiences.”

The location of the billboards, along highways and in cities, also speak to the issue of missing and murdered Indigenous women and girls. On the Highway of Tears in British Columbia, at least 18 primarily Indigenous women have gone missing between 1969 and 2006. There are hundreds of other known cases across Canada.

“Of course, when we conceived of the project, we were very mindful of murdered and missing Indigenous women who disappeared from highways or cities where the billboards are located,” Dempsey said.

“We also wanted to present the strength and creativity and power and, dare I say, resilience of Indigenous women.”