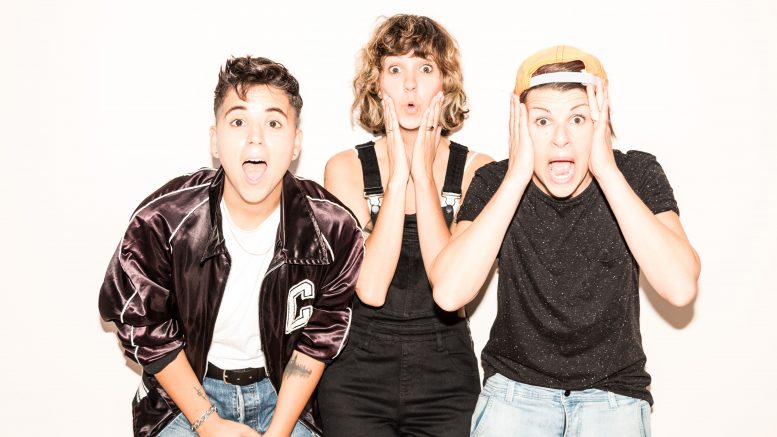 The band will stop at The Good Will Social Club March 16 on its way to JUNOfest in Vancouver.

“We’re really looking forward to finally meeting our Winnipeg fans who have been supporting us for so long,” said Isabelle Banos, who plays synth and bass and contributes backing vocals.

Banos said one of the most frequent questions the group is asked concerns the playful and seemingly mismatched band name.

“We wanted a name that represented the nostalgia that’s present in our energy and in our music,” said Banos.

“We want to bring people back to a time when life was simple, playful, and carefree. When you could really get your hands dirty and it felt really good. We just want to remind ourselves and our fans that you don’t have to lose that as an adult.”

Caveboy is one of three winners of this year’s Allan Slaight JUNO Master Class, chosen by a panel of past JUNO winners and industry professionals including artists Lights and Kardinal Offishall, and president and CEO of The JUNO Awards, Allan Reid.

It will be Caveboy’s first time in Winnipeg, and they explained they are not quite sure what to expect from the city or from their show.

“We’re super excited to learn a bunch more about what seems like a really awesome city,” Banos said.

“All we know is that it’s the capital of Manitoba and that it’s where Neil Young lived a big part of his life.”

Since the release of their self-titled EP in 2015, the members of Caveboy have had to make significant life changes to pursue music seriously.

“A big change has been that we quit the day jobs that were getting in the way of us doing this full-time. That felt really good,” said Banos.

“We’re also in this incredibly fortunate position of getting to travel to all kinds of really cool places around the world to play music. We’ve even had a few instances of being recognized on the street, which is still a very weird and surreal experience for us.”

Winnipeggers that make their way to The Good Will Social Club are in for a treat, with the band claiming its live show has “the power to school even a close-minded misogynist.”

“We also get a lot of fans commenting on the extreme energy of our live show and the dynamic between the three of us,” said Banos.

“This really means a lot to us because we’ve worked super hard on that and are always so happy to hear that our fans enjoy our performance as much as we do.”