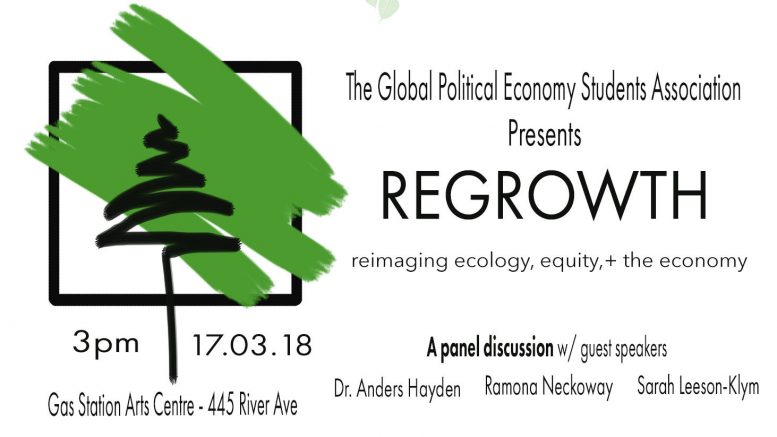 Running from 3:00 p.m. to 5:00 p.m. and titled “Regrowth: Reimaging ecology, equity, + the economy,” the event will include a three-speaker panel that will include Dalhousie University associate professor of political science Anders Hayden, University College of the North professor Ramona Neckoway, and Sarah Leeson-Klym, the Manitoba Regional Director of The Canadian Community Economic Development (CED) Network.

Event organizer and fifth-year global political economy student Julia Greening said the event will begin by highlighting how aspects of the Canadian economy, such as economic health and success, have been conventionally measured and the ecological costs that underly such measurements.

“This includes highlighting the true ecological costs of a system premised on perpetual growth, and the way they disproportionately fall on already marginalized groups,” she said.

Following this, Greening added, “We want to emphasize alternatives to this model, and give a platform to those currently working to create change. We think our speakers are such people.”

Hayden’s research is focused on examining the socio-political responses to climate change and other environmental challenges. More specifically, the political science professor is interested in the evolving balance between promoting “green growth” and sufficiency-based challenges to the endless growth of production and consumption.

Speaking to Hayden’s most recent book, When Green Growth is Not Enough: Climate Change, Ecological Modernization, and Sufficiency, Greening said Hayden “Contrasts various approaches to addressing climate change, and concludes that so-called ‘green technologies’ [are not] an adequate solution to this enormous problem.”

She added that “He argues that a more fundamental change is required, one that emphasizes sufficiency over scarcity as an organizing economic principle.”

Neckoway, a PhD candidate at the University of Manitoba, focuses her research on the many perspectives, experiences, and implications of energy production on Cree homelands in Northern Manitoba.

After collecting and integrating countless local perspectives on the growing presence of Hydro development in the North over the last decade, Neckoway is hoping to develop an alternative narrative regarding energy production.

Leeson-Klym, the Manitoba Regional Director for the Canadian CED Network, a national web of community organizations building healthy, sustainable, and inclusive communities and local economies, is adamant that community economic development can spearhead efforts to address nationwide challenges such as inequality, poverty, and environmental degradation.

Since 2011, Leeson-Klym has been involved in various CED-led initiatives, including coordinating the annual Manitoba Gathering for community and economic developers as well as playing a role in establishing the Enterprising Non-Profits program.

The Manitoba Gathering, an annual CED conference, brings together over 500 people each year from different areas of the not-for-profit, social enterprise, and community development sectors for a day of “sharing, learning, networking and celebration.”

Leeson-Klym has also worked with Enterprising Non-Profits, a collaborative program that fosters social enterprise development and growth as a way to build strong non-profit organizations and healthier communities.

Today, in partnership with the provincial government, Leeson-Klym provides leadership to the Manitoba Social Enterprise Strategy that aims to create jobs in the province though the development of social enterprises.