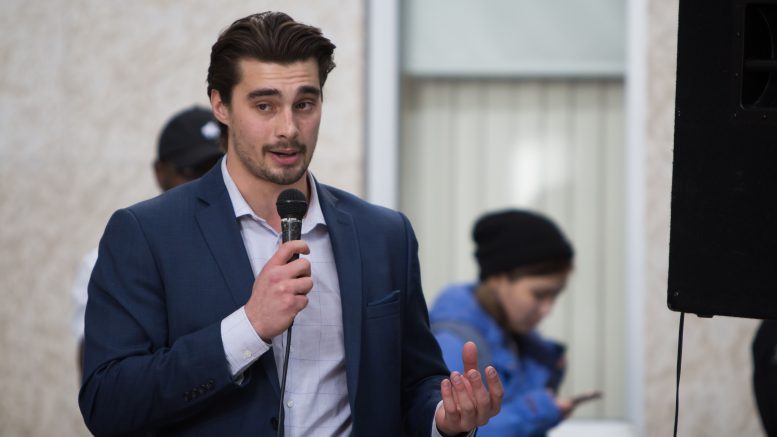 Future UMSU VP finance and operations candidate Jonah Wasylak has been accused of being involved in a racially-motivated altercation at the Hub Social Club in October. An investigation did not confirm any slurs were repeated and no official complaint was filed.

Future UMSU VP finance and operations candidate Jonah Wasylak is facing allegations of involvement in an incident where two international students were allegedly verbally assaulted with racial slurs in a students’ union business in October.

The accusations began circulating on social media Wednesday. An investigation that included UMSU, the Hub Social Club – where the incident took place – and Bison Sports uncovered no proof of the slurs. The international students did not submit official statements or complaints.

Online posts included a screen shot of the Hub’s patron ID scanner that showed that Wasylak and other members of the Bisons men’s hockey team had been banned from the pub for an “extremely serious” disturbance that included “excessive racial slurs directed at bar patrons” inside and outside the bar.

The bans – which were extended to five members of the hockey team – were later changed to disturbance-breach of conduct and eventually lifted altogether following the investigation and after the players submitted a written apology to the bar in which they denied using racial epithets.

According to individuals who came forward to the Manitoban, Wasylak was part of a group involved in an altercation with international students while at the Hub just before 2 a.m. Oct. 18.

The alleged confrontation began in a washroom where the international students were berated with racial slurs.

Wasylak and the other students were then removed from the bar. The international students requested pub security escort them to their vehicle and the confrontation continued in the parking lot.

“When they left outside, all the hockey players were outside waiting for them,” said someone familiar with the incident, who asked to remain anonymous.

The Hub security member “was a big guy, tough guy, and he was having to push their way through and they were trying to jump them or beat them up or whatever,” he said.

UMSU presidential candidate Jehan Moorthy – who is campaigning with Wasylak on the Future UMSU slate and facilitated the investigation following the incident in the fall – acknowledged the Bison forward and Asper student was involved in the confrontation but said Wasylak was in fact trying to break up the clash.

“He was sober that night,” said Moorthy.

“He wasn’t engaged in any of the sort of confrontation that took place, he was simply there to maintain his friends, move away from the incident and just to go on by the end of the night. There was drinking involved with some of his friends that were present and he wanted to make sure that his friends sort of de-escalated any hostile behaviour.”

Moorthy said he discussed the incident with Wasylak before including him on the slate and is confident he did not repeat a slur and is not racist. Wasylak did not respond to a request for comment.

UMSU president Tanjit Nagra said she is aware of the incident but did not refer to any particular students.

“There was an incident that occurred involving students, I believe there was racism involved and racial slurs towards some students – it was involving some Bison athletes,” she said, adding that Moorthy, in his role as UMSU VP finance and operations, took a lead in trying to resolve the matter.

She said she understood the issue to be resolved in December after a letter of apology from the players was delivered to Hub staff, and the coach of the men’s hockey team, along the athletic director of Bison sports, assured her that the team would be banned from the pub and sensitivity training would take place.

Bisons director of athletics and recreation Eugene Muller acknowledged members of the Bisons hockey team were involved in an incident but said it was not instigated by the athletes.

Muller said that from his knowledge of the altercation it was a “hanger-on,” rather than a Bisons hockey player, who used the racial slurs, and only after being “sucker punched” in the washroom.

The investigation found no evidence of the sixth individual, on security footage from the university or the Hub, or information from the patron ID scanner.

Muller acknowledged the incident continued outside but said the athletes “were not waiting to cause a ruckus or to cause a fuss.”

“My understanding is they were scared for the safety [of the individual accused of using racial slurs],” he said.

He said that while the hockey players involved faced several repercussions – including writing the apology letter “because of the disturbance,” undergoing a “session with human rights and conflict management,” and “extra training because of the night out” – it was not the allegations of racially-charged language that drew the punishment.

“The repercussions were that we had a game in 48 hours – what are you doing in a bar 48 hours before?”

Muller said he has met with the men’s hockey coach and the players involved and believes their version of events.

“I refuse to believe that these guys would be this stupid, in this day and age, and they are all – from knowledge of them – really good people,” he said.

“And I know that when one of our players heard that, he objected to the person involved. It’s [2018], you’re not allowed to use language like that.”

Muller would not release the name of the student he said allegedly used the racial slurs. He added that he encouraged staff at the Hub to further investigate the situation, but because the victims did not come forward or press charges, there was not much he could do.

“I said that if there is no allegation, and we only have one side to the story, then that was the case closed to me because there were no people coming forward,” Muller said.

The anonymous source said he brought the issue forward now because he believes the alleged actions do not line up with the values Wasylak has been advocating for while campaigning.

“I know people saying racial slurs might not mean that’s actually how you feel about a race – you might not actually be racist – but it’s completely disrespectful and inappropriate, especially someone who’s representing students like that. I don’t think that’s right.”

— with files from Garett Williams