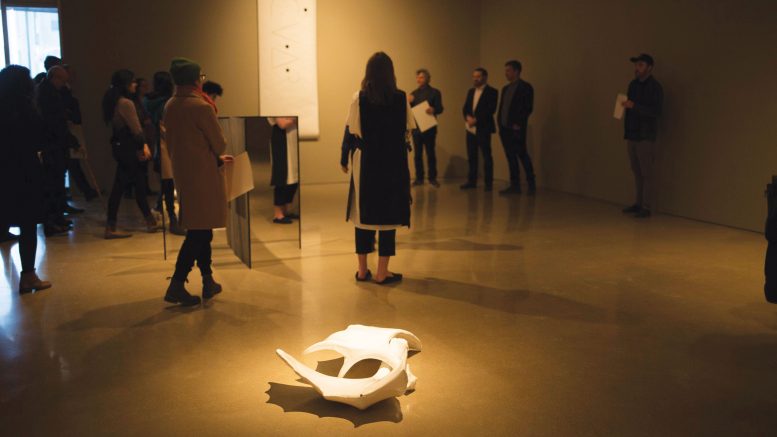 Antlers wrapped in plastic, titled "Unnatural", sit on the floor in the midst of Aubin's gallery "no brighter in the midde" at the School of Art ARTlab. The gallery is open until April 13.

The U of M’s first Indigenous designer in residence Sébastien Aubin ended his term at the school of art with the opening of his exhibition “no brighter in the middle,” a mixed-media gallery of work Aubin completed while at the University of Manitoba.

Aubin began his residency in September and over a six-month period created a body of work while connecting with students and sharing new ways of thinking about art and design.

Sammi St. Clair, fine arts student, was assigned to document Aubin’s residency. St. Clair worked with Aubin weekly and helped to build two pieces titled pass it on and Breathing the same air for the exhibition.

She also collaborated with Aubin during his residency. The pair would share and discuss ideas, and St. Clair said working with Aubin was a great opportunity for her.

“Being in fine arts, you don’t really get to see what actually gets put into motion putting a show together,” she said.

“So really seeing him on personal days when he’s thinking of what he wants to do, and also seeing all the works come together and the connections he had to make with people, it’s just a really big learning experience.”

St. Clair was not the only person to work directly with Aubin during his residency. Annie Beach and Katherine Boyer collaborated with Aubin on a mural that will be displayed on campus in the coming months.

“Working with Sébastien was a wonderful experience, and a dream come true for an Indigenous student at the school of art,” Beach said.

“What he offered was so unique compared to regular instructors, because having a relationship with him was much more casual, and he was in a position where he was here to learn from the students as much as they were learning from him.”

Beach is a fine arts student and the Indigenous student representative at the School of Fine Arts Students Association. She said she valued having Aubin at the school as an example of what she could achieve as an Indigenous person making contemporary art. Beach is Cree, and Boyer is Métis. For the mural project, Beach said Aubin allowed her and Boyer to design the mural.

“We developed the concept ourselves, allowing our own ideas of what it is like to be an Indigenous student at the university be present in the work,” she said. Aubin addresses a small crowd at the reception for “no brighter in the middle,” the culmination of Aubin’s artworks created throughout his residency.

Aubin took a break from working independently as a graphic designer to pursue the residency. He said he would like to do more academic work now that his residency is complete.

“I think it’ll do me a lot of good to get out of my mental plateau and give me the capacity of moving forward in a more positive, educational learning direction,” Aubin said.

He said goodbye to colleagues and students at the opening reception for the gallery Feb. 28.

“In the long run, today, how I feel, and if I have a little tear, it’s because I shared as much as I could, and you guys are just fantastic people. And it’s because of you that I’m here,” Aubin said to a crowd of about 30 people at the reception.

Aubin has since left Winnipeg, but will return in mid-March to finish the mural project with Beach and Boyer.