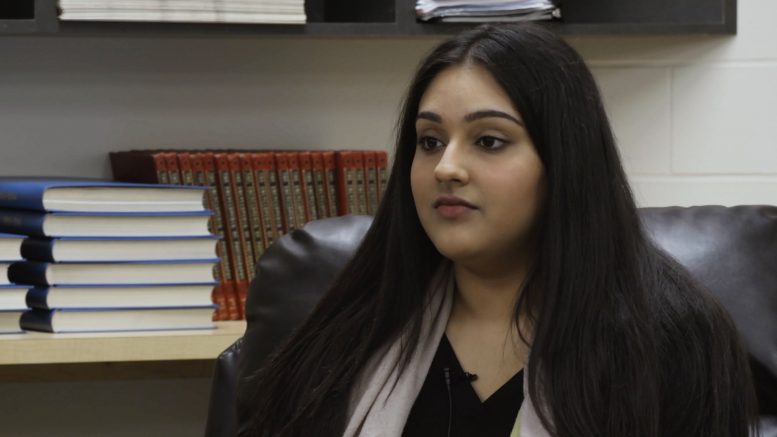 As University of Manitoba undergrads go online this week to vote for a new group of student union executives, one union member is most likely taking a sigh of relief.

This election will cap off two years of achievements and shortcomings for outgoing UMSU president Tanjit Nagra, who took the reins of a scandal-plagued student union with promises to restore accountability and, in her own words, not get caught up in “petty student political nonsense.”

Above all, Nagra dedicated her presidency to listening to the concerns of students, which became evident in her hands-off approach to UMSU council meetings and her weekly open-to-all “Talks with Tanj” at Degrees Diner.

Well, let us look back at the events of the last two years in the world of student politics.

Not long after she was elected in 2016 with a mixed slate of candidates, Nagra’s promise to stay out of petty political nonsense proved itself nonsense. From the beginning of her first academic term as president, it became clear that controversy was not going to stay away from the UMSU offices.

In September 2016, then vice-president student services Jessica Smith abruptly resigned after the Manitoban obtained leaked emails from union staff showing heated exchanges between Smith and a fellow executive and staff members. And that accountability promise? Well, no official explanation for Smith’s resignation was ever provided by the union or Nagra, and to make matters worse, UMSU councillors refused to discuss the matter publicly or in council.

From that point on, Nagra insisted on being the sole spokesperson of the union. All inquiries were to be made directly to her and she would provide comment on behalf of the union.

It seemed as though that decision was made to keep a tight grip on the executive’s messaging and avoid any public tongue-slips from her colleagues. However beneficial that decision may have been for her presidency, it took a toll on the value of an open student democracy.

How can a union be held accountable if its leadership and members do not openly discuss its operations?

Then, in November 2016, Nagra’s first true leadership test manifested itself in the University of Manitoba Faculty Association’s decision to go on strike, forcing thousands of students out of classrooms.

Nagra’s first inclination was to stay out of the conflict. Her duty was to the students, she insisted, not to the interests of the university’s professors or administration. This, she may have calculated, was the best decision to make politically, as she had professional relationships in the administration building and faculty association offices to maintain.

However, the president’s unwillingness to take a side at the beginning of the strike was the first major folly of her listener-in-chief style of leadership. By choosing to let council argue amongst themselves as to whether or not the professors’ demands were in line with the interests of students – which they clearly were – Nagra let the strike drag on with no student position.

It took two weeks of heated debate and in-house polling for council to finally vote to take the side of the striking professors. By that point, however, UMSU’s involvement made little-to-no difference in the outcome of the strike, whereas it may have forced an earlier resolution if the union had clear leadership and a strong mandate to force the two sides to keep negotiating.

To be fair, we’ll never know for sure what impact a strong student voice would have had on the outcome of last year’s faculty strike. But we do know thousands of students were forced to give up their winter holidays and set back graduation dates as a result. UMSU’s dithering on the issue didn’t serve to help any of them.

Nagra’s commitment to listening was not always completely senseless, though. Her ability to connect with students who felt underrepresented by past UMSU executives did not go unnoticed. Last March she was re-elected with 65 per cent of the vote.

Nagra’s achievements in the last two years also include a successful revitalization of IQs, cleaning up the union’s confusing and inconsistent bylaws, and successfully lobbying the federal government to lift a cap on funding for Indigenous students. This year, the union has managed to balance the books after successive deficits.

She also made well informed choices for who to run with as her vice presidents in her second go, especially in her decision to bring Allison Kilgour – a dedicated and outspoken advocate for students since her time as an Arts senator – onto the slate.

Only 10 days after Nagra was re-elected, the provincial government introduced legislation that would lift a cap on tuition increases, a devastating blow to the union, whose principles prioritize advocating for affordable education.

The union’s frustrated reaction to the legislation was appropriate, but the move by the Progressive Conservative provincial government should not have come as a surprise. It was pretty clear from the moment they came to power that some form of fee increases would be coming down the line for Manitoban students, given all the PC rhetoric on “cleaning up” the former NDP government’s fiscal “mess.”

That being said, there was likely not much Nagra could have done to stop the PCs from going ahead with their tuition hike plans even if she did have ample warning and time to lobby the education minister.

What she could have solved this year, however, was UMSU’s longstanding dispute with the Canadian Federation of Students. Instead, the feud returned to front and centre as a series of spats between representatives of both organizations, including Nagra, became more and more heated.

Although Nagra extended an olive branch to the federation early in her presidency by cutting a cheque for the nearly $1 million that UMSU owed for past refusals to pay dues, the rapprochement didn’t last long. Soon, student union executives and federation representatives were again pointing fingers at each other over past ills and the relationship soured even more.

The union’s decision to hold a plebiscite – a non-binding referendum – on whether UMSU should continue its membership in the national federation showed just how little Nagra cared for her promise to get out of petty student politics.

That decision backfired, with students voting overwhelmingly last month in support of remaining in the federation.

It seems voters have much less tolerance for pettiness than their elected representatives. As Nagra moves on from student politics, she should keep that lesson in mind.

The outgoing UMSU president would no doubt do well in the realm of politics. Her management skills are an asset and her ability to listen to concerned voters would be vital to any future in public life, but Nagra should also note that simply managing and listening aren’t enough.

To make a meaningful difference, you have to be willing to make tough choices and act on them. This was unfortunately lacking from the president’s office in the last two years.

May review from UMSU’s president