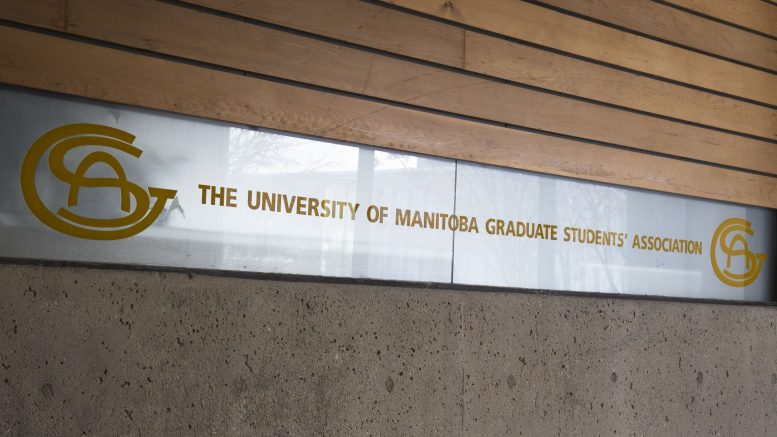 Campaigning is underway for the University of Manitoba Graduate Students’ Association (UMGSA) general elections, with one full slate and two independent candidates in the running.

The ballot will include a vote on a referendum to increase the association’s operating budget fee by $4.62, to $58.50, for the fall and winter terms.

The three-day voting period is set to run from March 21 to March 23.

In the running: meet the UMGSA candidates

Neumann currently serves as UMGSA president, has served as vice-president and president of the U of M Philosophy and Ethics Centre Student Associations, and is pursuing a masters degree in philosophy.

During the all-candidates forum March 14, Neumann noted that his experience as president for the 2017-18 school year has enabled him to overcome a “learning curve.”

“One possible initiative we are looking at this year is trying to organize graduate students at the faculty level,” he said. “To get different departments within a given faculty to collaborate a bit more.”

On her candidacy for VP academic, Araujo said, “I would like the opportunity to raise student issues to higher levels of the university.”

Kushner is currently a senator for UMGSA and in 2016-17 served as president for the Environment and Geography Graduate Students’ Association. He is also a master of science student in the department of environment and geography.

“I would like to work on establishing ties at a governmental level,” said Kushner, “to ensure that when education is a topic of conversation, graduate students are a part of the story.”

A second year Ph.D. student with the department of geological sciences, Ross served as a UMGSA councillor in the Internal Development and Review subcommittee for the 2016-17 term and currently sits on the association’s Bylaws and Policy Committee.

“I hope to advocate for students and help make the UMGSA as effective as possible,” said Ross. “Specifically, I plan to work towards more consistent and accessible governance documents and pursue budgetary options that will afford increases to student grants.”

He has previously served in 2015-16 as the president of the University of Manitoba Bangladeshi Students’ Association (UMBSA) and said he wishes “to use the experience to increase graduate student involvement in UMGSA” and make UMGSA more inclusive.

“I hope to bring more events that serve students in their later years of graduate studies,” he said. “I will make myself accessible to general students and open to any suggestions that will make UMGSA an organization where all members feel comfortable.”

Currently a master of arts student researching Indigenous educational sovereignty, Forsythe will begin her Ph.D. in the upcoming fall term.

She now serves as the co-president for the Native Studies Graduate Association, Métis rep for the University of Manitoba Aboriginal Student Association, UMGSA Indigenous ad hoc committee chair, and a councillor for the native studies department.

“I have been on advisory councils for the creation of courses, degrees, and teaching,” said Forsythe. “My journey to this point has prepared me to represent the UMGSA as senator.”

Koohgoli, master of sciences student in human nutritional biochemistry, currently serves as vice-president of the Human Nutritional Sciences Graduate Student Association and is a member of the Food Systems and Sustainability Conference organization committee.

“I have heard the voices of my peers, listened to their concerns, and have worked with them to resolve any arising issues,” Koohgoli said.

“I look forward to building on the work that I have done and becoming more involved as a senator,” she added, saying that she looks forward to listening to graduate students’ concerns and advocating on behalf.

Pursuing a Ph.D. in the U of M’s biomedical engineering program, Elwali currently serves as the president of the Biomedical Engineering Graduate Students’ Association.

As VP external, Elwali has promised to work with UMSU to limit tuition fee hikes, enhance the UMGSA and alumni relationship, and improve the relationship between graduate students and their respective supervisors.

“I see my friends, all them have issues between them and their supervisors,” Elwali said, adding that students can sometimes see the progress of their theses or research delayed and, as such, an improved student-supervisor relationship is necessary.

Nwaiwu’s three platform promises are to integrate a diverse perspective into the senate, encourage trustworthy representation of issues concerning both domestic and international students, and increase the engagement between graduate students and the UMGSA senators.

“I looked at the current system,” he said. “How many graduate students really know what the senate does,” he asked, adding that he plans on creating “a platform where I have one-on-one interactions with graduate students”