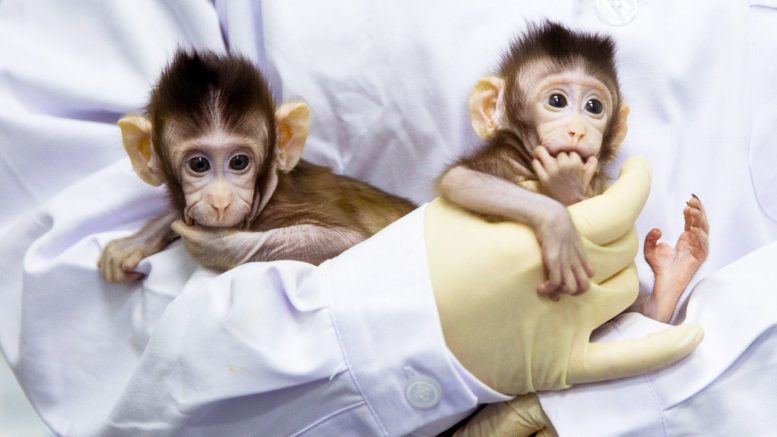 By David Zirangey
Image by by Xinhua-Jin Liwang via Getty Images March 6, 2018

Whether it is through new research, new commentary, or Barbra Streisand proudly declaring that she had her dead canine cloned into a brand-new litter of dogs to love, news on cloning captivates the public – and its ethical implications never seem far from the hot-button news of the day.

Some of the most recent groundbreaking research on the topic has sparked discussion on the ethics of genetic manipulation.

The SCNT technique involved making a slit in the outer membrane of an adult female monkey’s oocyte and removing its nucleus. Next, nuclei of unspecialized cells, called fetal fibroblasts, from an aborted monkey fetus were fused into the prepared egg. Special treatment reprogrammed the cells to develop like a normal fetus would, even without fertilization of the egg by a sperm. This technique, called “the Dolly method,” has been used to clone over 20 animal species. While the cells of a monkey have been cloned in the past, this is the first time this technique has resulted in the birth and survival of a primate clone .

While some hail developments in the world of animal cloning as ground-breaking, many have called for stricter global regulations and further enforcement of animal welfare standards. Amidst concerns for animal welfare, Poo has asserted that the research followed international standards for animal care.

Arthur Schafer is the founding director of the Centre for Professional and Applied Ethics at the University of Manitoba and a professor in the philosophy department. Schafer spoke with the Manitoban on the ethics of primate cloning, and genetic manipulation in general.

The ethical case for primate protection

Animal rights groups have already expressed concern over the implications of this research. There is something to be said about the inherently brutal nature of any study that focuses on animal testing – in this particular case, the pair of monkeys were the first successful clones after multiple failed attempts – and even animals that are successfully cloned often face severe health problems later in life.

“Many ethicists – and I include myself here – see primate research as ethically impermissible except possibly when the research is supremely important and cannot be done in any other, less morally objectionable, way,” Schafer said.

Opposition to research on primate cloning arises partly because of the uncertainty of the consequences for the future health of the cloned animals. Humans share more DNA with primates than they do with any other mammal, and with those shared characteristics, comes a level of heightened sentience. This amplifies the ethical ambiguity of research focusing on primates.

“The moral case for giving special protection to primates against being used for biomedical research rests largely on the fact that they are intelligent and sensitive creatures who are very similar to ourselves in morally relevant ways,” Schafer said.

“This is a controversial philosophical issue, however, and there will be lots of disagreement both within and [outside of] the research community.”

Schafer, speaking more generally on the future possibility of increased SCNT sophistication, predicted that if non-human primate cloning technology was ever to become safe and effective, the prospect of the same technology being used for reproductive or therapeutic human cloning becomes much more likely.

“Such a development might lead to increased demand – from infertile couples for whom other reproductive technologies have not worked – for the legalization of human reproductive cloning,” Schafer said.

He further pointed out that genetic manipulation of humans for therapeutic purposes is already being done – gene therapy, for example, is currently used to treat a myriad of conditions, including sickle cell anemia and cystic fibrosis – and is widely accepted as “morally justifiable” when it can treat serious genetic diseases.

Schafer stressed, however, that “At every point in the development of biomedical primate cloning research, potential benefits will have to be weighed against potential harms. The technology should be adopted only when the benefits clearly outweigh the harms.”

This being said, it appears unlikely that the SCNT cloning technique will be applied to humans any time soon. Canada currently prohibits any kind of human cloning for any purpose, including reproductive and therapeutic. Violation carries a penalty of up to a $500,000 fine or jail term of up to 10 years, or both.

“Biomedical scientists everywhere in the world want to publish their breakthrough research in the world’s best scientific journals,” Schafer said.

“So, until international governments and scientific bodies can establish proper rules and regulations it would be a potentially effective deterrent to unethical research if the editors of the leading scientific journals, such as Nature, Science, and Cell, were to adopt a uniform set of rules for contributors and then refuse to publish research which violated those rules.”