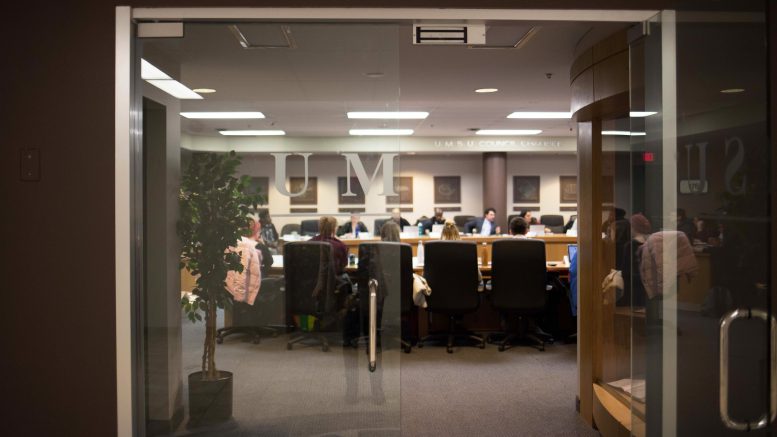 Amendments to the UMSU Act are being criticized by the Canadian Federation of Students – Manitoba (CFS-MB) as an assault on students.

The UMSU Act is a piece of provincial legislation and the highest governing document of the students’ union. The proposed amendments – which mandate referendum votes on any UMSU related fee increases, make the act gender-neutral, and call for council votes on the union’s continued membership in external organizations every two years – passed UMSU council Feb. 15.

The amendments dictate that if council does not support maintaining membership in an outside organization, the question will be put to membership in a referendum.

The amendments were introduced in a private member’s bill put forward by Fort Richmond MLA Sarah Guillemard, and presented to the provincial legislature March 22.

In a release issued March 23, CFS-MB called the changes “a direct attack on students organizing against the government’s anti-education agenda.”

The UMSU Act has been amended on only one previous occasion, in 1990, as part of an overhaul to make all the province’s laws bilingual.

“The government should not meddle in student association affairs and leave decisions concerning organizational membership with individual student members,” reads the release.

Section 7 of UMSU’s bylaws states that any new fees levied upon members of the union must be approved by a referendum. This does not apply to fee increases, which currently only require a two-third majority vote of council “at a regularly scheduled meeting with two-third quorum” to pass.

Speaking on the amendments to the act earlier this month, outgoing UMSU president Tanjit Nagra said, “We want to ensure that students have a say in any new fees.”

In November 2015, UMSU council approved an omnibus motion that made plans to fund child care on campus, bursaries for Indigenous students, undergraduate research, and renovations of UMSU-owned space on the first floor of UMSU University Centre.

The motion included a $64 annual fee increase to fund the projects. The increase passed without referendum.

Student union fees currently stand at an average of $100 per term, not including additional fees for other university services, such as health and dental benefits or the U-Pass.

UMSU president-elect Jakob Sanderson said the proposed changes to the UMSU act have been “misinterpreted” in the CFS-MB release – which claimed the amendments would affect services including UMFM, Engineers Without Borders, the World University Service of Canada (WUSC), and the Manitoban.

UMFM Station Manager Jared McKetiak said that although the station is “currently looking into how any of the proposed changes to the UMSU act will affect the station in the future,” he does not think that the concerns outlined in press release will amount to any negative changes to the station’s levy.

Sanderson said the goal of the amendments is not to open the door to de-federating from CFS, adding that external organizations do not include services “that [UMSU] fees are directed to.”

“What the UMSU Act does do is make UMSU far more democratic and autonomous by mandating that any sort of fee increase that we want to have via UMSU has to go through the entire student body.”

Nagra echoed Sanderson, saying “At present, UMSU is not a member of UMFM, or the Manitoban, and the structure of WUSC is that there is a U of M Chapter, not that we are a member.”

“These are examples of external fees that members of UMSU pay into, not organizations that UMSU is a member of,” she added.

“The wording of the amendments apply specifically to the membership of UMSU in an external organization, rather than the fee itself.”