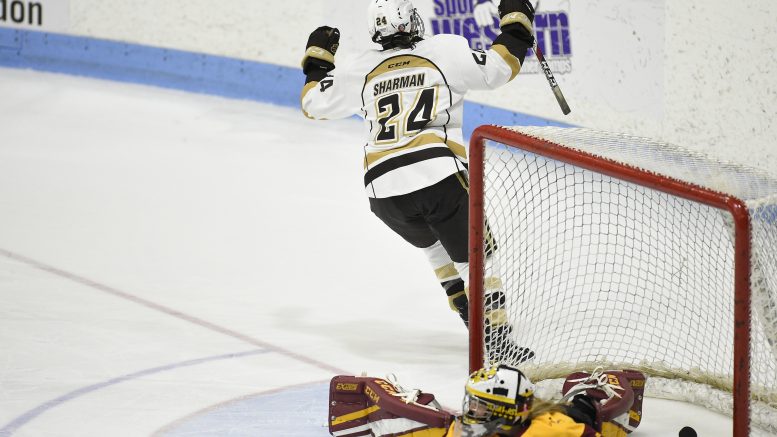 Bison forward Alanna Sharman scores in the shootout against the Concordia Stingers in the semifinal at the Women's Hockey U SPORTS National Championships on March 17 in London, Ont.

The University of Manitoba women’s Bisons hockey club is off to the U SPORTS national finals after swatting the Concordia University Stingers 2-1 in a semi-final shootout Saturday.

After a back and forth first period, the Stingers came out buzzing in the first and broke the scoreless tie. Stingers forward Sophie Gagnon got the puck in front, dangled around Bison goalie Lauren Taraschuk, and tucked a backhander around her pad.

Then the Bisons came pushing back, forward Venla Hovi continued her monster of a post season, cutting into the slot and dropping a back-pass to Lauren Warkentin. The defender ripped one from just inside the faceoff circle, top-shelf on Katherine Purchase to tie the game at one.

“10 years ago I would’ve taken three shots already so just waiting around for the right pass I guess,” Hovi said.

The teams went back and forth in a war in the third period, and with the final seconds winding down, Bison defender Erica Rieder almost ended it. She snagged the puck in the high slot and wristed one on goal, but Purchase was equal to the challenge and the two sides went to overtime.

Overtime solved nothing, leaving the game to a shootout.

Jordyn Zacharias shot first for the Bisons, mimicking the move she pulled earlier in the season against Lethbridge, faking a shot to make Purchase bite, pulling up and burying a wrister.

“[Jon Rempel] asked me before,” Zacharias said about shooting first.

“He was like, ‘Do you want to shoot before’ and I was like ‘Just put me first so I don’t have to see anyone else just in case they take my move’ and you kind of get inside your head a bit and I was happy to go first because there’s not a ton of pressure and you just get to try whatever.”

After Taraschuck made her first stop, Alanna Sharman was up next for the herd. She skated up, making Purchase bite with the same move as Zacharias before burying the backhander to put Manitoba up 2-0.

“I actually thought we won on that because I wasn’t thinking very smart,” Sharman said. “I celebrated by myself and realized that my team wasn’t coming on the ice and I was like, ‘Oh another shot.’”

Then it was up to Taraschuk. The Stingers shooter tried to go five-hole on the rookie phenom, but Taraschuk kicked the puck aside and was mobbed by her teammates as the Bisons claimed victory with a 2-1 shootout win.

The Bisons have already bettered the club’s best result at the national tournament, having never placed better than third in the program’s history.

“I think for the program it’s just a validation of everything we’ve been trying to do,” Bisons head coach Jon Rempel said.

“It’s lessons learned over the past 14 years about how to manage things, about how not to manage things. You know as you get older you get a different perspective and I personally came into this national championship just wanting to enjoy it and wanting my players to enjoy it.”

The Bisons will play against the host team in the University of Western Ontario Mustangs in the gold-medal game. Puck drop is at 3 p.m. and can be streamed live on 101.5 UMFM.

Connor is next in line from college ranks