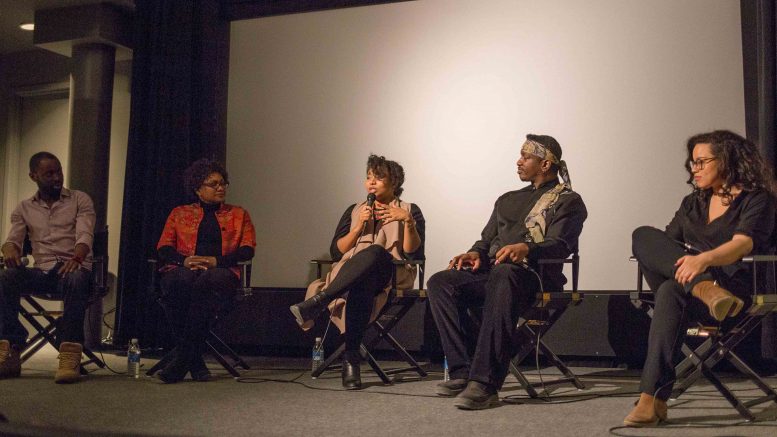 (From left to right) Bisong Taiwo, Julie Hackett, Adeline Bird, and Ben Williams speak on a panel about developing film projects as black artists, moderated by Alexa Potashnik, at the Cinematheque on February 24.

Black History Month is an international celebration occurring each February. Events in Winnipeg wrapped up on Feb. 24 with a community gala and closing ceremony at the Norwood Hotel. The gala, hosted by Winnipeg’s Black History Month Celebration Committee (BHMCC) was a chance for community members to be acknowledged for their efforts in preserving black culture in Canada. The month’s events kicked off with an opening ceremony and memorial service for Dr. Martin Luther King Jr. at New Anointing Christian Fellowship. Throughout February, BHMCC hosted a variety of events across the city, including Celebration of Music-Songs of Freedom, youth events including a basketball drop-in clinic, a history lesson, traditional cooking workshop, and a research challenge on the people and places that have influenced black history in Canada.

BHMCC chair Nadia Thompson has been on the organizing committee for the past 10 years. While she acknowledged that people may differ in opinion on what Black History Month represents to them, Thompson said she sees it as a way to share knowledge and be proud of her identity.

“If we’re going to think negative of it, it’ll be a negative thing,” she said.

While BHMCC organized events to educate people about black history, Black Space Winnipeg made history by putting on the first film festival on the prairies focused on black filmmakers.

Black Space has partnered with the Winnipeg Film Group and Cinematheque for film screenings in the past, and the two groups together decided to host the film festival. “Last year we hosted the film [I Am Not Your Negro], so this year we figured we might as well go big with a film festival, not just to support black filmmakers across the country, but also to support and celebrate Black History Month,” said lead organizer Alexa Potashnik.

Each of the screenings was followed by a question-and-answer period with someone involved in the making of the film. Short films by black Canadian filmmakers were entered into consideration of the newly-created Winston Moxam Award, given this year to Shimby Zegeye-Gebrehiwot‘s film titled Yaya/ayat.

“[Moxam] was a black Canadian director from Winnipeg and he made a couple films that went big from Winnipeg, so we’re naming the award in his honour,” Potashnik said.

Filmmaker Bisong Taiwo entered his short film, Saving Grace into the film festival after being approached by Black Space.

“When Black Space saw [Saving Grace] they approached me and said ‘Hey, we’d like to screen your film,’” Taiwo said.

“And part of what it was that they were celebrating dark people, and I happen to be a black dude.”

Saving Grace focuses on a young girl who has to save her friend from a psychopath who abducts young girls. Taiwo said that the member screening and the Afro-Prairie Film Festival were the first times he has screened his work publicly.

“It’s scary. It’s nerve-wracking actually, when you have your stuff playing because you have no idea how people are going to react,” he said.

“You spend a lot of time writing, shooting, and editing just in your basement and it looks good to you, but you don’t know what others will think. Most of the comments that I got were that it’s literally very intense and scary, and I was happy with that because that means they care about the girl.” Taiwo said he hopes to participate in the festival every year, if it continues.

While Black History Month has ended, Potashnik said Black Space will continue to host events throughout the year.

Local photographer Travis Ross has made a point of supporting Black Space Winnipeg. Ross, whose family arrived in Canada through the Underground Railroad, said that Black History Month is a conflicting time for him.

“I find the older I get, the more I feel responsibility to help or give power to a different generation, because the reality is I do stand on my grandfather’s shoulders,” Ross said.

“He worked and dealt with so much more than I could ever begin to imagine.”

Ross said he has been trying to assist Potashnik and others in any way he can to help build capacity and support for arts in Winnipeg’s black community.

“One of the biggest things I’ve been talking with [Potashnik] about has been building up access and options within the black community, and the black Indigenous community as well, where it’s not so much we’re having these events but we’re hosting workshops,” Ross said. Rychelle Thompson-Folkes receives the Youth award for her commitment to culture at the Norwood Hotel on February 24, 2017.

“We’re giving access, tools for people to go out and create. Because the talent and inspiration is there.”

Potashnik said that Black Space is hoping to hold the Afro Prairie Film Festival again next year, and see more filmmakers participate in the program.

“This is happening at the end of the month, but we’re going to keep doing stuff the rest of the year,” Potashnik said.

“Because we don’t just exist for 28 days of the year.”