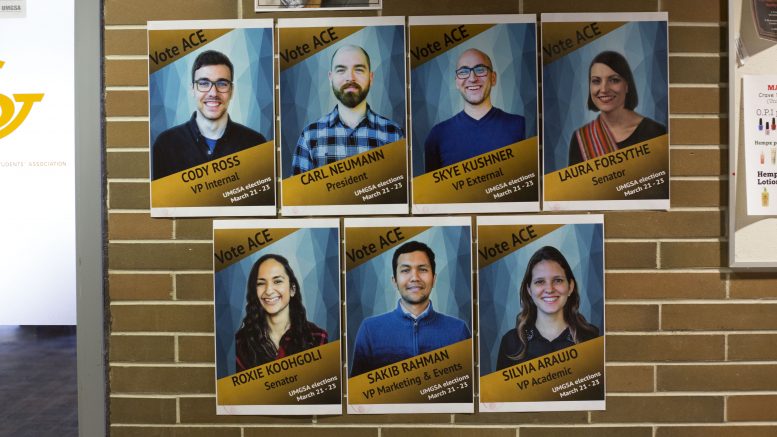 Neumann was re-elected to the position with a total of 497 votes out of 603 ballots cast.

Neumann, who ran uncontested, said he was pleased to be re-elected for the second time and is looking forward to the upcoming year where he, along with his teammates, would have the opportunity to achieve the goals which fell through in the past year.

During the all-candidates forum March 14, Neumann said he intended to promote policies that encourage the engagement of graduate students “at the faculty level.”

Neumann said there was a disconnect among graduate students in the various departments of each faculty and that his team plans to organize different events which would not only unite but encourage interaction among students across departments.

He added that his team will consider having several levels of graduate student representation, as opposed to only the UMGSA council.

“Right now we sort of just have our one UMGSA council and we’re thinking about creating faculty-level groups of graduate students,” Neumann said.

Neumann also said his team would continue to increase its efforts to ensure “Indigenous engagement and reconciliation” at the University of Manitoba.

Ahmed Elwali, a doctoral student studying biomedical engineering who ran independently for the positon of VP external, initially received more votes than his opponent Kushner, with a total of 320 votes cast in his favour out of 617 cast ballots.

However, due to an alleged violation of the campaigning process, only 288 out the 320 votes were counted as valid for Elwali. As a result, Skye Kushner was elected to the position.

Elwali said he had been penalized by the UMGSA Elections Committee for using email lists to solicit votes in the just-concluded elections.

However, Elwali said he did not send “unsolicited emails” as alleged by the committee, though he did send emails individually to let people know about his policies and goals, which he believes did not contravene the election rules.

Elwali added that the election committee sent out emails which contained “incorrect information,” and was worded in a manner that aimed to discourage people from voting for him. Elwali’s name was not explicitly mentioned in these emails.

Elwali said he was further penalized because one out of several posters included in the “unsolicited emails” bore the UMGSA logo, another violation which he argued was unintentional.

He said rather than being penalized for both alleged violations concurrently, the chief returning officer had insisted on punishing the offences separately, the result of which was his loss to his opponent.