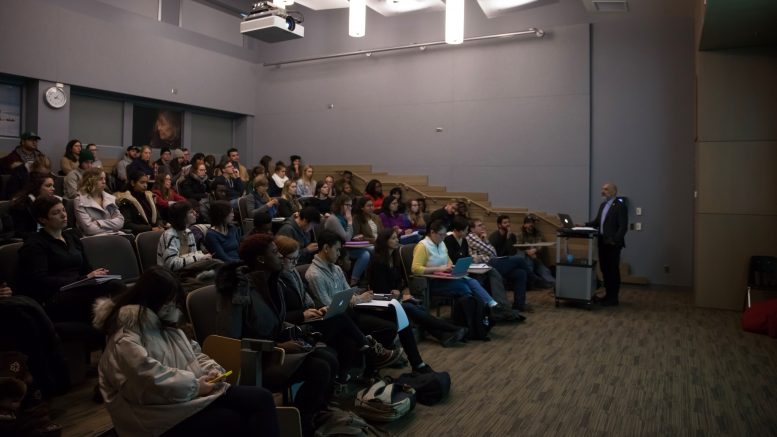 A large group was in attendance for University of Guelph professor Faisal Moola’s talk on indigenous-led conservation.

Moola said the chief difference between government policy and Indigenous-led “environmental assessment” processes is the fundamental comprehension of the land itself.

“An environmental assessment process that was driven by Indigenous people for Indigenous peoples would focus on the management needs of the land, the water, the air, the wildlife, the communities that depend on those resources first,” he said.

“In practical terms, it would mean that rather than focusing on what we should take from nature to create wealth and employment,” he continued, “we should first consider what needs to be retained in nature to sustain both the wildlife and the wellbeing of local communities.”

Moola’s talk coincided with the federal government’s recent introduction of Bill C-69 on Feb. 8, which will overhaul current methods of environmental assessments and streamline the approval process for major natural resource extraction projects.

The proposed bill would scrap the National Energy Board (NEB) and create the Impact Assessment Agency of Canada, which would carry out more extensive reviews of industrial projects by assessing their environmental, health, social, and economic impacts, as well as their effects on Indigenous communities.

The NEB is an independent regulatory agency, created in 1959, to oversee parts of the energy industry and whose mandate includes regulating the construction, operation, and abandonment of pipelines, natural gas and crude oil imports and exports, as well as oil and gas exploration.

Moola noted that Indigenous scholars remain concerned that the bill does not explicitly incorporate Indigenous voices in the decision-making process for industrial development projects.

He stressed that discourse on industrial development should not take place in the absence of a worldview that highlights humankind’s essential connection to nature.

“Nature is our home,” Moola said. “Nature provides our most fundamental needs and nature dictates limits to growth.

“So the protection of nature should be our highest priority when it comes to the way in which we regulate and manage our resources.”

Treaty 8 and impacts of industrial development on traditional lands

Following European settlement across British Columbia and the province’s incorporation into confederation in 1871 , the Dane-Zaa people signed Treaty 8 in 1900.

Moola said Treaty 8 “enshrined a solemn and binding promise” ensuring that the “Dane-Zaa would be able to continue their traditional activities” such as hunting, trapping, and fishing “without forced interference or forced dependency upon the Crown.”

Moola noted that although the Crown’s newly procured consent to develop any land in the Peace River region rested on this promise, the Dane-Zaa and other Indigenous communities “have seen their lands irrevocably damaged” through industrial activities like deforestation, mine and dam construction, and fracking operations.

He said this latter development gradually resulted in a “sprawling network” of “thousands upon thousands of kilometres of seismic lines of roads and pipelines” that have come to “dominate the landscape.”

Moola said that as part of a study conducted with the David Suzuki Foundation and Dane-Zaa partners, The Peace Dividend: Assessing the Economic Value of Ecosystems in B.C’s Peace River Watershed, he and his team published the first spatial analysis of industrial land use pressures and industrial land use change over a 56,000 square kilometre region of Dane-Zaa and Cree territory in northeastern B.C.

“More than half of all of the pipelines in British Columbia are just found within Dane-Zaa territory,” Moola said.

Moola also noted that if all these industrial ventures in the Peace River region were to be laid out and wrapped around the planet, they would go around “almost five times.”