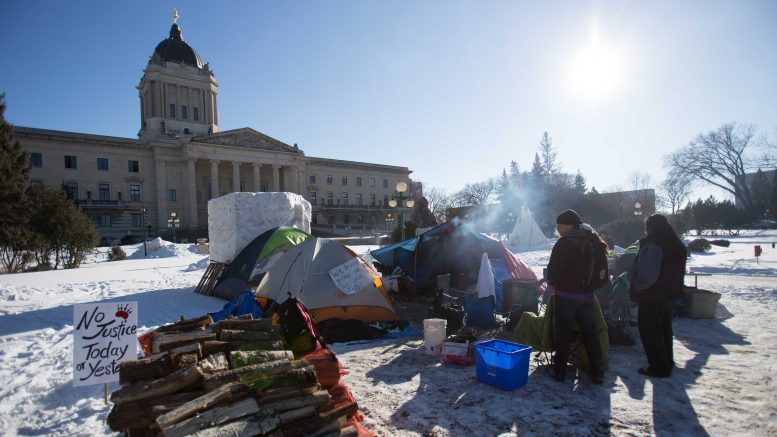 Soaring Eagles Camp at the legislature.

Darla Contois and a small group of protesters  began  camping on the Manitoba legislature grounds Feb. 22 after Raymond Cormier was acquitted of second degree murder charges relation to the death of Tina Fontaine.

Contois said she was inspired by the community focused protest camps near North Dakota’s Standing Rock Sioux Tribe Reservation that began in the summer of 2016.

“I think I was inspired by Standing Rock and how peaceful and beautifully community-oriented that protest was and I was inspired to try and do the same thing here,” she said.

Contois is not the first to camp on legislature grounds in protest.

In the summer of 2016, six tents were set up by protesters claiming the province was dragging its feet in the inquiry into missing and murdered Indigenous women and girls. The inquiry was bolstered by the community response to Fontaine’s 2014 death.

In October 2015, Brenda Osborne  camped outside the legislative building to demand answers about her missing daughter.

In September 2014, a group of protesters set up a camp after Fontaine’s  body was discovered.

In May of 2013, Kim Edwards set up a hunger protest after the death of Phoenix Sinclair demanding an inquiry into the province’s welfare system.

Contois said many who participated in the previous actions have visited her and shared stories.

“We’ve had so many different visitors today from all over Manitoba,” Contois said.

“We’ve had visitors come in who have done this sort of thing before multiple times. So they’ve shared their insights into things we can do as Indigenous peoples on our own lands.”

Contois said the experience has been difficult, but empowering.

“For the first time it feels like my ancestry is important and it’s valuable,” she said. “I have this inherent connection to my ancestors, which feels really nice, because all the things I’m allowed to do my ancestors have done for thousands of years.”

Contois has been broadcasting  updates via her personal Facebook  profile.

The group has received food, water, blankets, and cash donations as of Saturday morning. Contois also mentioned  that many visitors thanked them for setting up the camp.