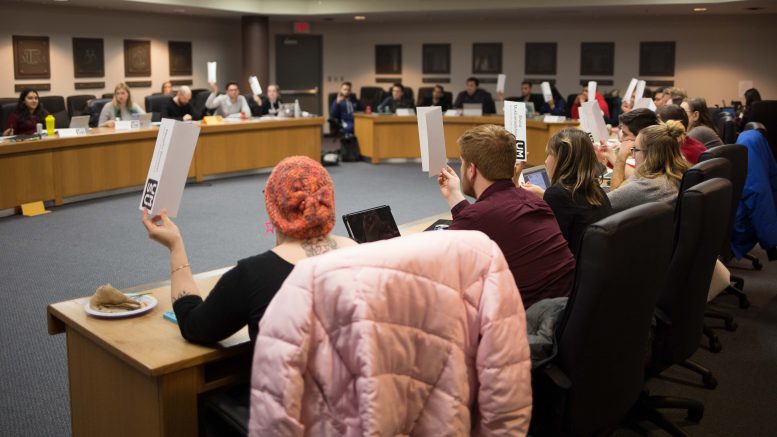 A motion challenging the Manitoban's funding was forwarded to UMSU's executive committee Thursday.

A motion challenging the Manitoban’s funding was forwarded to UMSU’s executive committee Thursday.

The motion, which was moved by Science Students’ Association representative Navkiran Chhina, seeks to trigger a referendum asking UMSU members if they support the creation of an opt-out option relating to the $12.19 fee paid toward the paper. It comes only two weeks after a similar motion seeking a referendum to defund the Manitoban was withdrawn in the face of public backlash.

The levy paid by students to support the student-run weekly paper goes toward equipment and salaries. The print edition of the paper – one of the largest student newspapers in Canada – finances itself through advertising revenues.

The motion was seconded and sent to the executive committee, who will examine it further and return it with a recommendation to the full group of councillors to vote on.

A discussion on the motion that lasted more than an hour was initiated by Indigenous students’ representative Noah Wilson. The majority of the speaking council spoke out against the motion, but there was some support for pushing it forward.

While many councillors who spoke referenced the importance of protecting the Manitoban’s ability to “keep UMSU in check” and defended the paper’s place on campus, others argued the paper’s lack of visibility was an issue.

There was also talk of pushback against the motion from outside of both UMSU and the Manitoban’s staff, with several councillors explaining that they had received multiple messages from students against the motion.

Chhina spoke several times, saying that the motion “wasn’t about defunding the Manitoban,” and others noted that rather than an opt-out option, they would find a more transparent relationship with the paper over budgetary allotments to be productive.

A collective statement signed by a group of 11 UMSU councillors prior to the meeting noted the paper’s importance lies “in that it serves not only as an informational tool for students, but also as a check and balance to UMSU council decisions as a whole.”

“Students do have a right to vote on the Manitoban’s funding, but we have to keep in mind that its function is very different from like that of the health and dental plan and the U-PASS, as the Manitoban is public and can be read by anyone regardless of opting out,” the statement reads.

“Freedom of the press and independence is paramount, and funding from UMSU allows that to be so, and we hope that the student body understands its importance. As UMSU councillors, we invite all students to voice their concerns no matter what they may be.”

Wilson also said in a statement that the paper allows students to “express their views on the current state of student affairs” and also provides its readership with a “platform to celebrate the countless number of students from all different walks of life who do amazing work in the student community at the University of Manitoba.”

Wilson added in the statement that he is “disheartened and concerned by the recent referendum motions proposed to the UMSU council that have been designed to target the operating funding of the student-run-and-operated newspaper.”

Arts Student Body Council president Jakob Sanderson said that while “a good conversation has been started” with the presentation of the motion, the disparities an opt-out option would cause were less beneficial than other options.

“Either it will create a system where people can read the Manitoban without paying for it, which is unfair to those who pay – or it could create a pay wall where students need to have opted in to the Manitoban in order to view content which eliminates its off-campus readership and notability, and decreases the accessibility of content for students,” he said.

“Either way, this would create annual unpredictability for the Manitoban’s yearly budget which could result in volatile staffing decisions and a poorer quality of paper. I think a better option is asking students for feedback on what they want the Manitoban to improve upon and attempting to implement positive changes rather than presenting students with a binary choice that could have lasting consequences.”

The next UMSU meeting is scheduled for March 15 on the Bannatyne Campus.

Should Canada prepare itself for Prime Minister Kevin O’Leary?