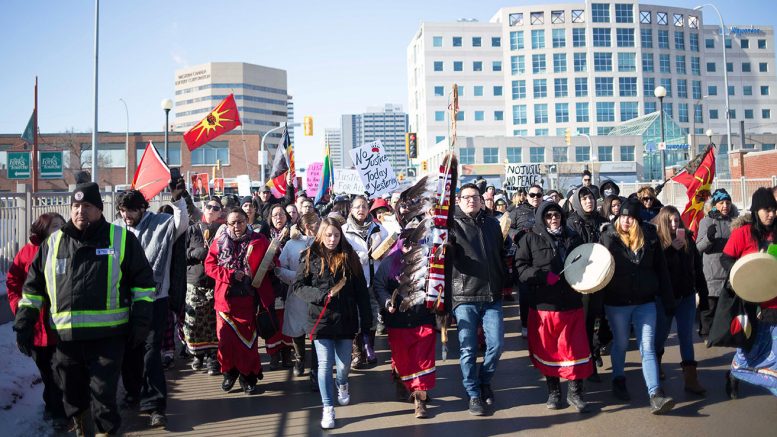 Hundreds of Manitobans took part in a march Friday honouring the life of 15-year-old Tina Fontaine.

The march and following rally came a day after an 11-member jury acquitted Raymond Cormier of second degree murder charges relating to her death.

Fontaine’s body was pulled from the Red River in the summer of 2014. Her death sparked calls that led to the inquiry into missing and murdered indigenous women and girls.

She was in Winnipeg from her home community of Sagkeeng First Nation and had been reported missing multiple times before her body was discovered in the river. Her death sparked criticism of the response of both the police and Child and Family Services (CFS).

The verdict comes only weeks after Gerald Stanley was acquitted of all charges relating to the death of 22-year-old Colten Boushie of the Red Pheasant First Nation.

The two verdicts have been met with local and national uproar, highlighting what critics are calling the systemic discrimination inscribed into the Canadian legal system.

Traditional song, sounds of drumming and shouts of “justice” echoed through downtown Winnipeg as supporters marched from the law courts to the Forks’ Oodena Circle.

Anishinaabe elder and member of the Bear Clan Patrol Chickadee Richard lamented Canadian society’s failure to provide for the Indigenous youth “that are not safe out there.”

“Every day you hear about a child missing,” she said.

“It’s open season now for our children, and when does it stop? When do we get justice? How do we find that justice? I believe that we are the people the change that and have our own justice system. Too many times they’ve failed us.

“Sagkeeng First Nation actually has one of the highest numbers of missing and murdered Indigenous women and girls – not only in Manitoba, but across Canada,” she said.

“And many of those cases of missing and murdered Indigenous women and girls go unsolved.”

She said Fontaine is representative of the more than 1,000 missing and murdered Indigenous women and girls who never see justice.

“She was our hope,” she said. “She was families’ chance at justice, and at hope, and at faith in the community and in the justice system. And we all failed her. And that is what is so significant about Tina.”

Grand Chief of Manitoba Keewatinowi Okimakanak Sheila North said Fontaine must serve as a “reminder that a lot of more work” needs to be done for “justice to be seen.”

“If Manitoba has to be the one to move this issue forward in a different way, then let’s do it together – we have to do it together,” he said.

“It’s so disheartening of all the Indigenous people that we’ve lost in Canada,” he added, while calling for Indigenous voices to be involved in reforming a system that is “not appropriate for our people.”

U of M masters in history graduate Joel Trono-Doerksen attended the rally and pointed to the systemic prejudices explicit in Fontaine’s fate.

“It was the system of CFS and the police department failure to act that lead to Tina Fontaine’s death,” he said.

“To describe the system failing Tina would mean that these institutions put her interests first,” he said.

“The system didn’t fail. It functioned exactly as it was designed to. This is why the system itself must be completely reshaped in accordance with the philosophy of Indigenous people.”

“It was really powerful to see so many people coming together for a cause like that,” he said.

Wilson said the verdict’s injustice to the life of 15-year-old Fontaine “won’t go without massive resistance from people who you know this all too common for.”

“And the sad thing,” he continued, “is a lot of Indigenous people saw this coming.”

“The systems that exist are failing to protect our Indigenous youth,” she said.

“If anything, they are forcing youth into situations where they are isolated, away from their family and community and supports that they need. In some cases, it is culture shock if they have to leave their community to come into the city.

“When you rip children away from family and community, nothing good can happen.”

Fredlund said she hopes to see the “inclusion of Indigenous voices in the reformation of the CFS” and the legal system’s “treatment of Indigenous peoples.”

“Today we were able to stand in solidarity with Tina and Colten and show that we will not be silenced by an unjust system,” she said.

“We will continue to speak out and seek change. We are fighting for our mothers, sisters, children, brothers, fathers, all our relations.

“We are trying to survive.”