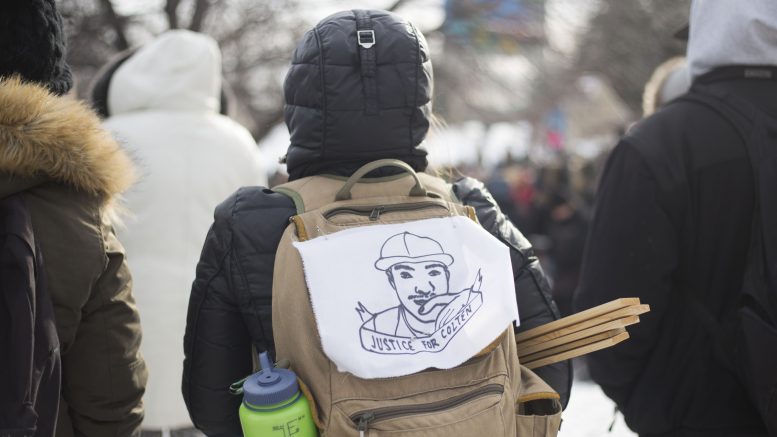 Rallies across the country call for an overhaul in the functioning of Canada’s criminal justice system.

Hundreds gathered at the Odeena Celebration Circle at the Forks Saturday afternoon to rally in support of the family of Colten Boushie.

Boushie, a 22-year-old man from Red Pheasant First Nation, was shot and killed in August 2016 after an SUV he was riding in with four friends was driven onto Gerald Stanley’s Saskatchewan farm. Boushie was shot in the head, which resulted in his instant death.

Stanley was charged with second-degree murder. On Friday, he was acquitted by a Court of Queen’s Bench jury in Battleford, Saskatchewan, that deliberated for more than 13 hours.

The court heard Stanley thought an ATV was being stolen from his property. He testified that he fired two warning shots and reached into the SUV to take away the keys when his gun “just went off.”

The driver of the SUV testified that the group had been drinking and admitted they attempted to break into a truck on a neighbouring farm. The driver said they went to Stanley’s farm looking for help with a flat tire.

Before the trial  began, Boushie’s family shared its concern with media that the jury lacked Indigenous representation.

The verdict sparked rallies across Canada which involved marches on police stations and courthouses calling for an overhaul of Canada’s criminal justice system.

Sinclair said the event is not just a reminder of the “love that we have for the Boushie family,” but the event also served as a “reminder to this country that we are still here and that we are not going anywhere.”

In a release issued by organizers before the event, Sinclair urged Canadians to show solidarity for the family by “refusing to let Canada continue along a path of racism and division.”

Elder Gerry Shingoose started the gathering with a prayer which she said she hoped would bring peace to the Boushie family.

“I ask each one of you go into your heart and into your spirit and think about the family – how it must have been for them last night, the last few days, and how it will be in the future and I ask you to send that love and support to them so they can walk into the future,” she said.

Sheila North Wilson, grand chief of Manitoba Keewatinowi Okimakanak, thanked the audience for coming out to show solidarity in numbers.

North Wilson noted that the act of violence against Boushie was not an isolated incident. 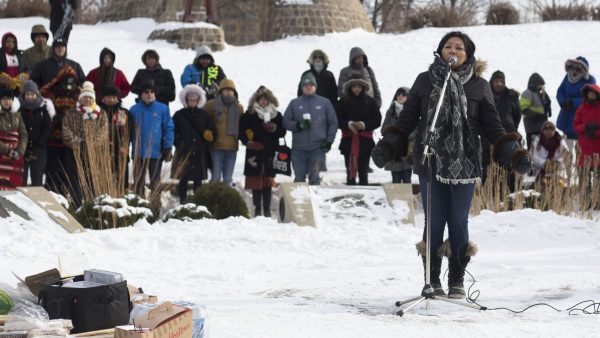 “It was years of history that went behind that gun shot that took that life,” North Wilson said, reminding the audience that more needed to be done to address the existing racism in Canada.

The crowd marched to the Law Courts Building on York Avenue.

Leah Gazan, organizer and education instructor at the University of Winnipeg, said in a press release, “This sends a poor message across Canada that if you are an Indigenous man, a white man can shoot you in the back of the head and be found #NOTGUILTY by an all-white jury.

“There is no reconciliation without justice.”

Speaking in front of the law courts, Gazan said “We’re hoping to push for justice for Colten Boushie’s family and changes to the criminal justice system so that it truly protects all individuals regardless of race, class, gender, or sexual orientation.”