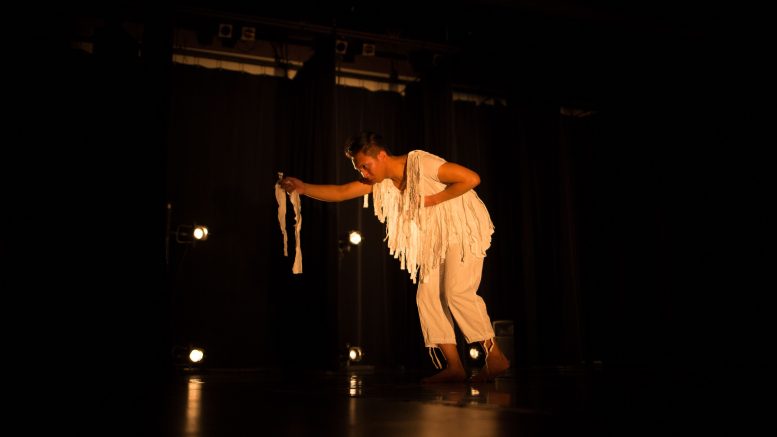 What would normally take five weeks to prepare took only eight days for choreographer Stephanie Ballard and students from the School of Contemporary Dancers.

The VERGE Dance Dialogues performance debuted on Feb. 8 at the Rachel Browne Theatre. The show explored history, time, and the conversations between different generations of dancers.

“A four to six-week process is the norm for a full length, including choreographing it and rehearsals,” said Ballard.

“I worked with the dancers, but I also came very prepared with choreography that I already had. It’s about half and half of recreating solos and duets I’d done before. So, I didn’t have to create it, I’m recreating it, but it’s new for the dancer.”

Subdued, rough exhales were heard over the music while a dancer stretched his arms outwards to the sides, spun, and fell to the floor. A projector filled the back wall with a film prepared for this dance. The dark stage at the Rachel Browne Theatre was level with the audience, which allowed the dancer, Mark Dela Cruz, to approach the edge of the stage and present Ballard, who sat in the front row, with a strip of white cloth, a piece of his costume for this part of the performance.

According to Ballard, its a stepping-stone between finishing school and starting to dance with a company, or to dancing at a professional level.

The performance explored the idea of time by projecting pre-recorded footage on the wall behind the dancers while they performed. The performance started with a slideshow featuring historic photographs and newspaper articles relating to the dance community in Canada. The slideshow was followed with a commentary by Ballard on the history of contemporary dance in Canada.

“I kind of believe when you’re dancing you’re having a dialogue, the creative exchange. And then there’s also me literally introducing the history of dance with a slideshow we start the show with.”

After Ballard’s speech, the dancers took to the stage and performed a number of pieces, more than half of which included projections on the wall that were prepared in part by guest artist Kayla Jeanson.

Jeanson said that Ballard had a lot of creative control in the filming process and it was not until the editing process, along with looking at Ballard’s past work, that the connections between the film and the choreography start to become apparent.

“She was getting us to re-enact things that other dancers had been doing before,” she said.

“[Ballard] was making connections across time, figuring out – Trevor kind of resembles Dan in this moment, in this costume, let’s find a place where we can create this moment again. That’s where there’s echoes across the pieces.”

The closing piece paired a film of the performing dancers moving from dramatic lighting into silhouette, with all of the dancers performing on stage.

“At first you see their faces, and then they walk and it turns to silhouette, and it has this layering effect of time and past selves, and it just felt right to explore that with that illusion created,” Jeanson said. She said she embraced Ballard’s way of making connections across time to create her film piece.