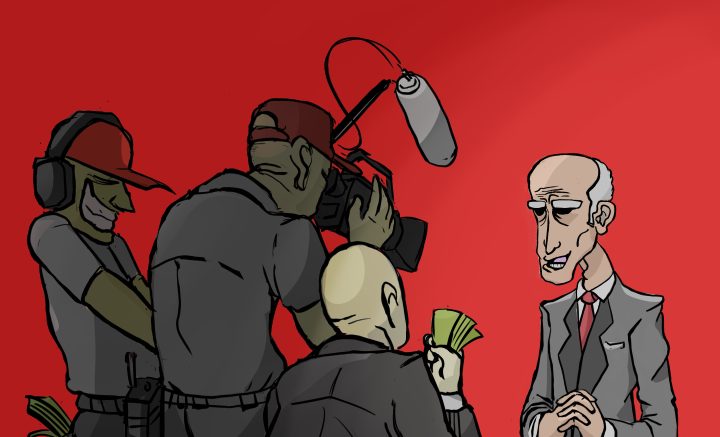 After Donald Trump and Hillary Clinton spent nearly $2 billion together in the presidential race, Trump proceeded to “drain the swamp” by filling his cabinet with millionaires and billionaires – with a combined wealth of $4.3 billion.  Although the issue is not present to the same degree in Canada – campaigns are publicly financed and donations are capped at $1,575 – that hasn’t prevented Big Money from attempting to seep into our system.

One of the legal ways this happens is by establishing think tanks. A think tank is an organization which provides advice on government and economic policy. Think tanks come from all political perspectives, with some independent and others very much connected to, and reliant on, their wealthy donors.

In America, a great example of the latter category is the Heritage Foundation. In the late 1980s, when the think tank suspected America would transition to a universal healthcare system, it came out with a plan that was ridiculously draconian to the average American, yet was an obvious giveaway to big business. The plan gave large insurance companies first priority, and all but disregarded the American public who relies on health insurance.

But the idea was exactly that – just an idea. This was until the influence foundation allowed the plan to be implemented in both Massachusetts under Mitt Romney, and later federally, known commonly as Obamacare.

In Canada, we have our own version of the Heritage Foundation: the Fraser Institute.

The Fraser Institute has been influencing our governing system since 1974. To get a couple of things out of the way: the Fraser Institute has an extreme right-wing bias, and is far from independent. It has taken at least $1 million from the American billionaire Koch brothers, over $2.6 million in dark money – undisclosed funds hidden from the public – from foreign right-wing organizations, as well as hundreds of thousands from big oil companies.

Should we then wonder why the Fraser Institute supports large oil companies, opposes raising the minimum wage, and supports privatizing education and healthcare in Canada? The Fraser Institute is – much like the American politicians who take legal bribes from billionaires – completely corruptible.

The issue with organizations like the Fraser Institute is not that they have a clear bias. Canada is a free country – if wealthy people have the means, they should be able to establish and sponsor organizations – even if they are nothing more than propaganda machines. The real issue with these think tanks is that their studies are time and again taken at face value by those who seek to benefit from their findings. And the organizations’ ties to billionaires and corporations are purposely kept under wraps. They absolutely should not be.

The way these right-wing organizations function is simple: consistently work to boost the most economically conservative candidate in the race – often the candidate for the Conservative party. Providing that boost is as simple as promoting their economic position as a functioning gospel truth, while claiming more progressive prime ministers’ economic policy fails Canadians.

The game they play relies on their ability to cherry-pick data. For instance, Justin Trudeau’s impressive numbers on jobs and unemployment – adding 422K jobs, and reducing unemployment to an all-time low of 5.7 per cent – are not at all convenient to their agenda. What they will then do is take a long-term trend of data, find an outlying month that fits their narrative – that the left wing kills jobs – and create a press release that says something like “Justin Trudeau is killing Canadian jobs.” They have done this time and time again on issues surrounding healthcare, taxation, and employment.

After that, it is only a matter of hours before news reports and conservatives like Andrew Scheer begin to share these releases. Of course, they conveniently leave out the fact the studies are conducted with the aid of investors with an interest in the results.

This gets to the heart of the issue: public perception. If they were forced to be visibly upfront with their perspective and billionaire donors, there would be far less of an issue. Even if these perspectives border on propaganda, they should still be able to produce it – Fox News should be able to do journalism focused on a certain political perspective, but not under the ridiculous slogan “Fair and Balanced.” However, the Fraser Institute refuses to be open about its clear political perspective.

On its website, the mission statements read, “The Fraser Institute is an independent Canadian public policy research and educational organization.” That is not being upfront about their bias.

The solution is simple: introduce legislation forcing these think tanks to disclose where every one of their larger donations – anything over our campaign contribution limit – come from, starting with the footnotes of every single one of their press releases. Soon enough, the bottom of every new report will look like a NASCAR vehicle. It becomes much more difficult to take a report seriously when it was funded by donations from billionaires and corporations.

If Andrew Scheer and the Conservative Party of Canada want to base their economic policy on policy on the findings of the Fraser Institute, the public deserves to know who are pulling the strings.

If Canada would like its economic policy to be dictated by honest actors, it is imperative that we do not allow organizations like the Fraser Institute the freedom to continue without transparency standards.