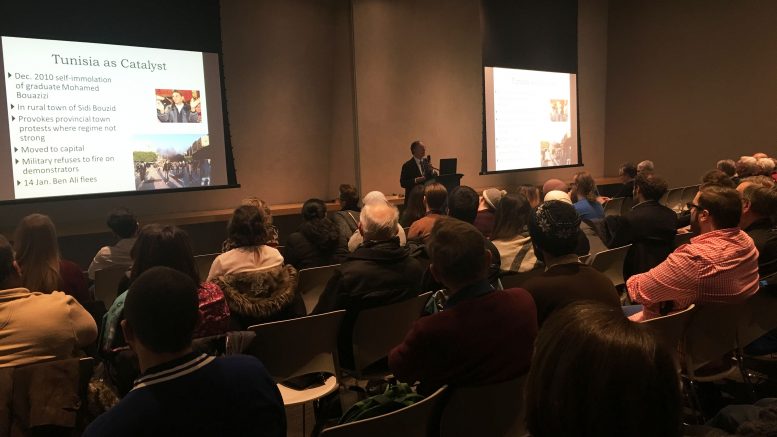 Beyond Crisis: The Middle East Past, Present, Future event series hosted University of Michigan history professor Juan Cole Dec. 11 at the Canadian Museum for Human Rights for a keynote address on youth involvement in the Arab Spring.

The event series, chaired by Jennifer Dueck, who holds the University of Manitoba’s Stephen A Jarislowsky Chair of the Modern Middle East and North Africa, features public panels and lectures aimed at exploring Middle Eastern and North African historical and contemporary issues.

The Arab Spring was a series of anti-government, initially non-violent, demonstrations and protests across the Middle East and North Africa during the first months of 2011.

The sudden mass mobilization of civilians calling for an end to long-standing regimes took many by surprise, particularly social scientists and political analysts.

A distinct feature of the Arab Spring was that it was initiated, organized, and led by Arab youth, who, in an interview, Cole referred to as “digital natives” growing up in an increasingly open and globalized world.

Cole described how the uprisings grew out of young Arabs’ frustration with the concentration of political power.

“The overthrow of the government happened in places where a ruling elite had decided to make the country its family affair,” he said. “And the youth objected to being inherited like so many sticks of furniture.”

Cole emphasized the significance of young people spearheading the uprisings, calling it an “interesting phenomenon,” particularly because this was a society that was “extremely patriarchal and children are expected to obey their fathers, and many Middle Eastern leaders adopted this rhetoric of being the father of the nation.”

In December 2010, following the self-immolation of a struggling Tunisian street vendor, Mohamed Bouazizi, in response to the confiscation of his products and harassment and humiliation experienced, protests against the Tunisian government resulted in the overthrow of then-president Zine al-Abidine Ben Ali – ending his 23-year term.

Tunisia acted as a catalyst to the uprisings, as the revolutionary wave spread across the Arab world into countries like Egypt, Libya, Yemen, Bahrain, and Syria. In most cases, protests were initiated and led by Arab youth.

“I think that the ability of the internet to show video was important,” Cole said.

He explained that alongside videos showcasing government cruelty against demonstrators, independent Arab news media networks, such as Al-Jazeera, broadcasted such videos to millions of viewers across the Arab world.

“This ability to demonstrate the brutality of the regime was important in mobilizing people to overthrow it,” Cole said.

On the Middle East and North Africa today, Cole argued that while the Arab Spring may seem like a fruitless venture seeing as how stability in the region has regressed and goals young Arab activists set out to achieve in 2011 remain unfulfilled, Arab youth continue to be up and active.

“The certitude that these young people will eventually take over is incontrovertible,” he said. “I don’t personally think that they have disappeared from the scene in the way that a lot of observers suggest.”

An example provided by Cole is the frequent university and college campus demonstrations that take place in response to campus issues.

“I think a lot of the energy of the youth has turned to very local concerns of youth, like campus policies and tuition and so forth,” he said.

“People ask me, ‘Well, why didn’t they form a party? Why didn’t they try to take over the government?’” Cole continued. “And I tell them, ‘Well, it would have interfered with their homework.’

“I mean, they were 18 and 20, and in most of these countries you can’t even run for parliament until you’re 40. And so, in the 2030s we’ll see them emerge as politicians. And there’s no guarantee, of course, that they will retain their youthful idealism or youthful programs, but it is likely that they will, down the road, have an impact on policy.”

From Winnipeg to Libya

“The expatriate Arab youth were very important in the uprisings,” he said. “In some instances, they were the ones who called for the demonstrations initially because they weren’t under the gun from the secret police.”

Among such activists is Ayat Mneina, a former U of M science student who currently works as a policy analyst at the Manitoba Legislature.

Mneina is a founding member of ShababLibya – the Libyan Youth Movement – an international news and youth development organization that reported on the Libyan uprising during the Arab Spring from abroad using a network of on-the-ground sources.

On her involvement in the uprisings, Mneina said, “ I kind of clued in really early on in December when things were happening in Tunisia.

“We were watching closely and I was really connected to my family in Libya at the time and had kind of a Libyan network of people that I spoke to frequently.”

Mneina explained that ShababLibya grew out of the realization that the Libyan government’s control over communication was extensive and as such, incidents of government brutality against civilians would go unreported. Mneina said that this tight grip on the media meant that “people would be killed and there would be no hope for mass protests and uprisings.”

“We said, ‘If something happens, we’re going to report it from outside. Because we can,’” she said. “We have tools that we can use that people on the ground don’t have and the regime can’t shut us down.”

“The news picked up on it actually fairly quickly,” Mneina said. “And we became this kind of middle man for them, because they didn’t know Libya, they didn’t know how to contact people, so we would give them sources, we would help get them photos and videos and then later on we’d send relatives to the Egyptian border to bring journalists in. It just kind of continued to unfold as people needed.”

Mneina explained that key to the success of ShababLibya was its ability to provide context on what was happening on the ground.

“I personally think that it’s still important to provide Libyan context about Libya from Libyans because there’s so much that’s written about Libya to the outside world by the outside world,” she said. “And you know how that can be problematic when decisions are being made and there isn’t that key narrative.”

On being in Winnipeg while reporting on a revolution taking place across the globe, Mneina said, “I was very much well aware of where I was when this all took place.”

“My location basically dictated what I was going to do,” she said. “If anything, Winnipeg forged my actual contribution because it decided where I was and I had to think outside the box in terms of how to engage. I think it was a unique moment.

“I don’t think it worked against me that I was here.”

The revolution will not be classicized