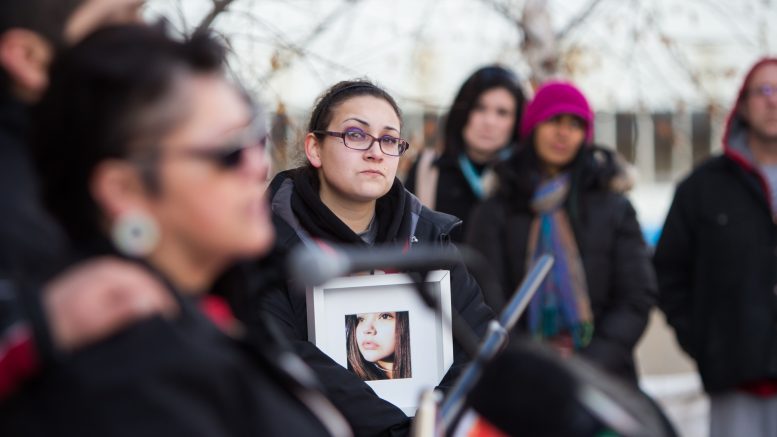 Among the speakers were Justice for Serena “Serenity” McKay who was 19-years-old when she was killed last April. Photo by Quincy Houdayer.

Hundreds rallied outside Winnipeg City Hall for the Women’s March Jan. 20 as part of a series of protests that unfolded across Canada and the United States.

Last year’s Women’s March, which saw thousands walk through downtown Winnipeg, was organized in solidarity with the Women’s March on Washington that saw record numbers of protesters flood the streets of the American capitol the day after U.S. President Donald Trump’s inauguration. Hundreds rallied outside City Hall for the Women’s March Jan. 20 as part of a series of protests that unfolded across Canada and the United States. Photo by Asha Nelson.

Speaking to the crowd gathered at the steps of City Hall, Basia Sokal, president of the Winnipeg Labour Council and one of the rally’s organizers, said “Women in Manitoba have some very unique issues. Childcare is a serious concern in the province and we have a crisis. We’re close to 16,000 children waiting for affordable and accessible childcare.”

Sokal highlighted access to health care, particularly for women in the province’s north, as another concern.

“We want the same access for all women,” she said. “And we want this province not to discriminate against Indigenous women that are under attack.”

“The women of this province deserve better,” Sokal added. “All women across the country, across the globe, and specifically here in our province of Manitoba, don’t have access to the same rights, the same drugs, the same needs and services – [it] is a shame.”

This year’s rally occurred in the midst of the growing visibility of the Me Too and Time’s Up movements, which aim to draw attention to the prevalence of harassment and sexual assault against women.

Priti Shah, a lawyer and owner of PRAXIS Conflict Consulting, reflected on the importance of movements like Me Too, saying 2017 was both an exciting and a challenging year for her personally.

“For so many of us, the Me Too movement was painful,” she said in an address to the crowd. “And for me it was a painful time because I had to look back upon the early days of my legal career where I experienced so much sexual harassment that I just let go by the wayside.

In an interview, Shah said her daughter was behind her choice to attend the rally.

“I am the solo parent of an almost 20-year-old daughter who is of African background,” she said. “And I want her to be moving forward in a society where she can do whatever she wants to do, she can be paid equally for what she does, and she can live free from harassment and discrimination.”

NDP MLA for Point Douglas Bernadette Smith said she chose to attend the Women’s March to stand up for the rights of women.

“We shouldn’t have to, as Indigenous people, be four times more likely to walk out of our house and never be seen or heard from again.” Smith is co-founder of the Manitoba Coalition of Families of Missing and Murdered Women in Manitoba as well as the Drag the Red Initiative and was among the speakers at the rally. She shared the story of her sister, Claudette Osbourne, who went missing in 2008.

Smith said that when Osbourne went missing, her family did not receive much help from the community and police, saying that “often what happens in the media, our loved ones are portrayed as less than human.”

“That’s exactly what happened with my sister,” she said. “When she went missing, it was, ‘aboriginal, sex-trade, drug-addicted woman missing,’ and it wasn’t until you read into the second paragraph that you actually found out who she was.”

In an interview, Smith noted that issues such as childcare, affordable housing, and addiction are among the many that need to be addressed, emphasizing safety as an important concern facing Manitoban women today.

“We have over 1,200 missing and murdered women across Canada,” she said. “And that number is almost 200 here just in Winnipeg, and these statistics continue to rise. Yet there’s no resources put in place for prevention to support families.”