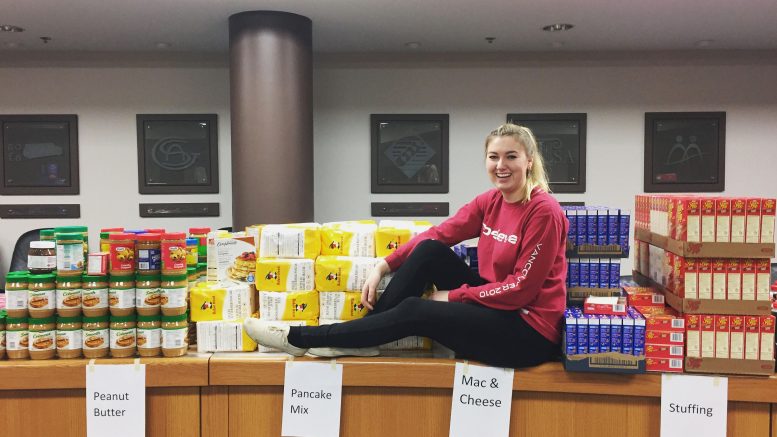 By Diana-Abasi Ubokudom
Image by Provided by Allison Kilgour January 11, 2018

UMSU organized its annual Holiday Hampers and Toy Drive program during the month of December to deliver hampers over the winter break.

The project, which wrapped up its 19th season, provides food items and toys annually for university students and their respective families who face financial difficulty and food insecurity, especially during the festive season.

Kilgour added that the program’s aim is to help mitigate the difficulty of being a university student along with supporting struggling students’ families.

“As students, most of us face some sort of financial stress with tuition and living expenses, but it’s easy to forget how difficult it is to be a student without family support or one responsible for a family themselves,” she said.

Similar to the toy drive organized last year, UMSU was able to support the program through adoptions, sponsorships, and donations.

Although donations vary each year, Kilgour said the recent program was “extremely successful.”

“This year we were able to provide Hampers to nearly 110 students,” she said.

“We also received an overwhelming amount of donations, both financial and through food and toy donations, from students’ groups and councils, faculties and university offices, and individuals on and off campus,” Kilgour said.

She added that the program was publicized through social media platforms, posters, and outreach initiatives targeting faculties and departments, with positive responses from both within and outside the university.

“Students and staff alike were eager to get involved, many of which [were] reaching out to us months in advance to participate,” said Kilgour. “We also saw media outlets, businesses, and members of the larger community express their interest in both donating to and promoting the program.”

Kilgour said she believed the support really came from the fact that “everyone at the U of M recognizes what a worthwhile cause this initiative is.”

“We received a lot of positive feedback regarding the hampers, as well as the toy drive,” she said. “Sponsors and adoptees are often able to communicate with and customize hampers for the families, and UMSU tries to ensure that we build every hamper with the families’ composition and preferences in mind.”

Kilgour noted that all beneficiaries of the program have either experienced some form of “financial hardship,” or accessed a campus food bank.

Kilgour said that the program was a reminder not to take one’s privileges for granted, especially during festive seasons.

She said pursuing a post-secondary education is a daunting task on its own, and even more stressful when it has to be balanced with family responsibilities.

“Being a student is tough enough,” she said, “and I admire those who are able to pursue post-secondary education while still providing and caring for their families, working full time, and taking on other time-consuming responsibilities.”