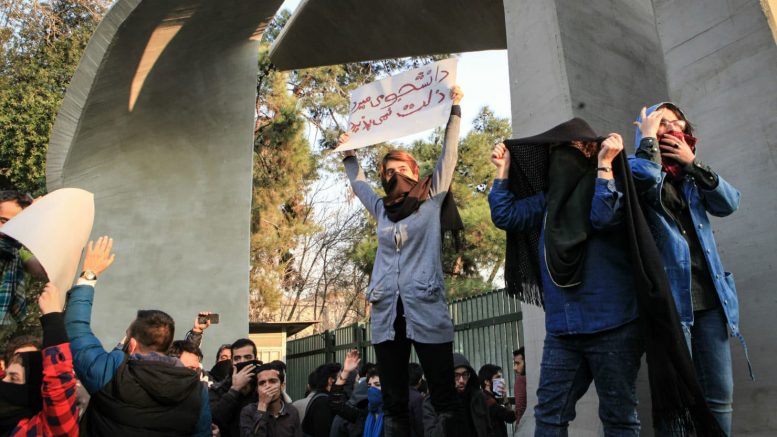 Iranian students protest at the University of Tehran on Dec. 30 as a part of the widespread demonstrations that took place across the country.

Ongoing protests in Iran, which began on Dec. 28, mark what Reuter’s has referred to as the country’s “most audacious challenge to its clerical leadership” in nearly a decade.

Demonstrations in reaction to Iran’s weakening economy, rising food and fuel prices, and widespread corruption began in the country’s second largest city, Mashhad. Online videos showed crowds of hundreds gathered in Mashhad chanting things like “Death to the dictator” and “Death to Rouhani.”

Hassan Rouhani is Iran’s president and was re-elected in May.

According to activists, protests in Iran have spread to include up to 130  cities and towns.

On Jan. 9, it was reported that up to 3,700 Iranians had been arrested during the protests, with reports emerging that many have been tortured. Of those arrested, 90  per cent are under the age of 25 years old. Violent clashes between protesters and security forces have resulted in at least 21 deaths.

U of M fourth-year biology student Behnam Beizaei, who immigrated from Iran to Winnipeg seven years ago, spoke of the economic hardships faced by the Iranian people, particularly young Iranians.

“It’s rooted in the frustration,” he said. “Like many of the countries in [the] Middle East, Iran has also a population of young people who are the majority. So when you have a lot of young people, they need jobs, they need to have enough income to start a family.”

“I know that there are some sort of inequalities,” Beizaei continued. “There is a gap. There is a gap between very poor people and very rich people. And most of the people in the middle class, they’re kind of getting divided between these two, and a lot of them are leaving the country, like my own family.”

Beizaei noted that the economic frustrations stem from high levels of inflation, unemployment, and prices of goods.

Improving the Iranian economy was an important part of Rouhani’s political agenda when he campaigned. This included signing the 2015 Joint Comprehensive Plan of Action, also known as the Iranian Nuclear Deal. The agreement between the Iranian government and the P5+1 countries – China, France, Russia, the United Kingdom, and the United States, plus Germany – saw Iran agree to heavy restrictions on its nuclear development program to relieve the country of US and European-backed economic sanctions.

In spite of the four to five per cent growth in the country’s gross domestic product under Rouhani, Iran’s economy remains in trouble, with inflation sitting at 9.6 per cent, unemployment rates at nearly 13 per cent, and youth unemployment at almost 29 per cent.

Iran’s youth, who make up more than 60 per cent of the country’s population, have been the driving force of the recent protests.

“If there was going to be a clear revolution in Iran, it could be a second Syria,” he said.

“I’ve been away from home for a long time,” Montazeri explained. “So I haven’t lived in [Iranian] society to tell you authentically that this is what the people are experiencing.”

“The economic [troubles] that are being piled up on people,” Montazeri continued, “that’s the main thing that’s driving the protests.”

Such economic struggles include an increase in the price of fuel and other basic goods by roughly 40 per cent. This, combined with an outbreak of bird flu which killed between 15 and 17 million chickens, resulted in a spike in the price of eggs by up to 50 per cent.

A leak of Rouhani’s new budget, which proposes an end of subsidies to the poor, tax increases, and an increase to fuel prices, all while military expenditures climb, appears to have acted as a catalyst for the protests.

While the uprising in Iran began in response to a stagnant economy, these ongoing protests have now evolved into a deeper political disapproval of the country’s government, with protestors calling for the overthrow of Iran’s supreme leader – where fundamental, uncontested authority rests.

Iran’s government is composed of a combination of elected officials – members of the legislature and the president – and an unelected cleric, currently led by Supreme Leader Ali Khamenei, who has the authority to override the presidency’s policy decisions. Basic rights, like the freedom of expression, are tightly controlled by the government.

“I just feel bad for the parents of those people that were killed,” Montazeri said. “Because most of them are like our age, maybe a bit older, university students.”

“That’s what I resent about what is happening.”

While the protests in Iran have died down, the anger and tensions remain.

Beizaei said the protests affect Iranians living both at home and abroad.

“Anything that happens in [the] Middle East kind of affects the life in here [in Canada] in general,” he said.

“Every Iranian that is living in Iran and outside, they do feel the frustration.”

Adding to this, Montazeri highlighted the importance of sympathy and understanding.

“I think what keeps us connected as a human race is empathy,” he said. “Many people aren’t involved or aware of what is happening in the Middle East. I think if we see something in a headline – a BBC, CNN headline – don’t just turn away. Maybe consider that there are these people that are fighting for their human rights.”

“Maybe our appearances are different, but we’re all after the same thing.”

Another U of M student, who recently returned from Iran and requested anonymity, said the protests in his hometown, Sari – located in northern Iran – were unexpected.

“My hometown [stood] up for one day [and] they destroyed us,” he said, referring to Iran’s Revolutionary Guard Corps – a branch of Iran’s armed forces led by Qasem Soleimani.

“The security destroyed everyone,” he said. “Two of my friends, they got arrested and I couldn’t say bye to them.”

He said what started out as lunch with friends quickly turned dangerous when “around 500, 600 people just came to the street” to demonstrate against the Iranian regime.

“But after [an] hour, the revolutionary guard just came,” he said. “They started hitting people.”

As soon as the protests turned violent, he fled.

“The day after, the parents, they were looking for their kids all the time. They were asking other people where are their kids, but no answer,” he said. “No one would answer and that’s really hard.”

“You see the mother crying all the time in front of the police station and asking for her kids and it’s really hard to see that.”

He expressed his frustration in the government’s failure to meet the needs of the Iranian population, saying Rouhani’s reelection was supposed to bring about positive change to the country. But the economic grievances worsened.

“I don’t want to say that, but sometimes they are calling our country [a] dangerous country,” he said. “Our people are not terrorists. Our people are really nice people.”

“I feel like this country should get changed. My people deserve more – deserve better lives.”