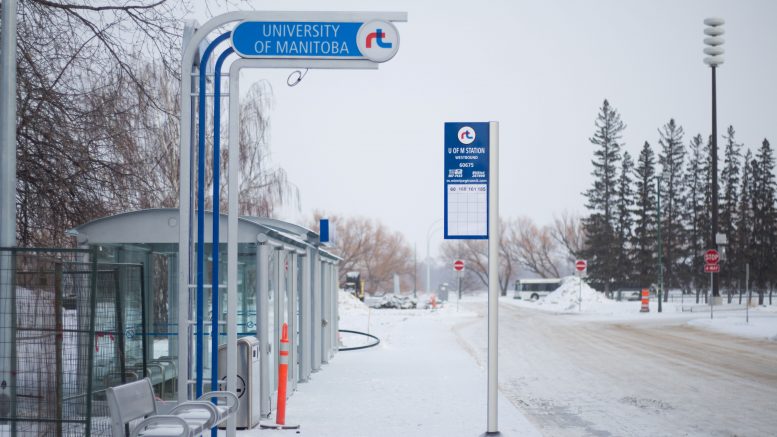 Transit service on the Fort Garry campus of U of M has returned to normal since temporary stops were installed along Maclean Crescent after construction of new stops started in summer of last year.

The temporary transit stops on Maclean Crescent were taken down when the transit terminal on Dafoe Road reopened Dec. 17.

Along with the relocation, changes were also made to the transit station that existed on Dafoe road before the construction began.

Two-way transit service has been introduced along Dafoe Road, with two new eastbound drop-off locations in front of the Agriculture Building and Taché Hall. Five heated shelters have been constructed for the westbound stops opposite Taché Hall.

UMSU president Tanjit Nagra  said that both the upgraded shelters and electronic signs will improve student’s campus experience especially during the cold months.

“Students can once again use bus shelters to keep warm during cold Winnipeg winters. In addition to more frequently updated [electronic] bus schedules,” she said.

Nagra added that UMSU has been actively advocating on behalf of students throughout the duration of the project as the union “voiced student concerns” and “kept up-to-date on construction updates.”

The new transit terminal with eastbound stops includes additional pedestrian crossings to increase safety and accessibility in these areas.

Nagra reiterated that with the new changes, student safety was of utmost concern.

“We see student safety as a top priority […] If there are any concerns I would encourage students to contact us with any feedback.”

The new bus stops will run from the eastern part of the Quad through Isbister, providing more space for buses to operate, thereby promoting a green environment on campus.

Use of the N-word denounced