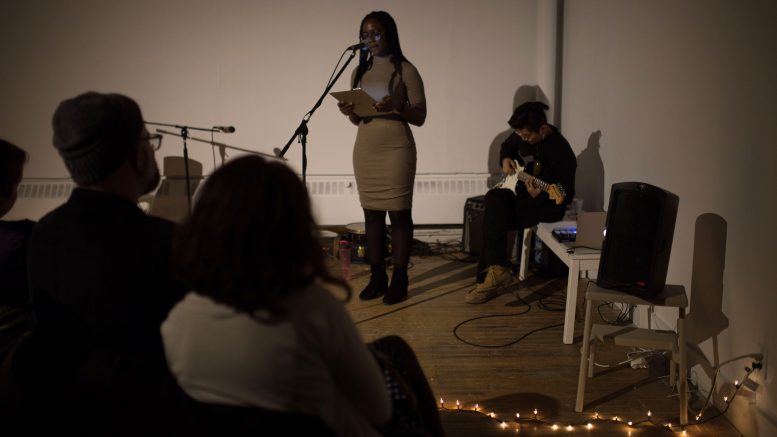 On Jan. 26, Contemporary Verse 2: The Canadian Journal of Poetry and Critical Writing (CV2) launched its three most recent issues at the Platform Centre for Photographic + Digital Arts. The journal features to poetry, interviews, essays, and articles. The release party featured poets reading their submissions, as well as new pieces.

Founded in 1975, CV2 exists to help readers discover and enjoy poetry. The publication is currently seeking to diversify the authors it publishes, according to board member Chimwemwe Undi.

Undi also submits to CV2, and was recently published in their “Poetry Only: Hair” issue. At the launch, she performed a version of one of her poems set to music by local musician, Ashley Au.

“I sent her some poems, and then she composed five ambient pieces based on the poems and to accompany the poems,” Undi said.

The poems Undi performed at the launch were about hair, as per the theme of the issue they were featured in.

“I’m doing a sort of loosely-themed set around hair because I belong to communities where hair is an important signal of identity, so I have a lot of poems about hair, which I didn’t realize until the hair issue,” she said.

Assistant managing editor Hannah Green said that while the journal usually holds its launch at McNally Robinson Booksellers, a new venue offered a chance to encourage collaboration and interaction between performers, and the audience.

“The venue is going to make it quite a bit different. With McNally, it’s fun, but everything is set. But we’re hoping this will be more of a get together, hanging around, eating and drinking after,” she said.

Green said CV2 was hoping to get a greater diversity of submissions for the issue than it did.

“We didn’t get as much as we wanted, we were hoping for more art stuff, but we’re trying to show how poets also do this, artists do that, and just playing with that,” she said.

Au said that though she is not a writer, she does freelance work for CV2 managing circulation, which has led to her becoming an avid reader. She said she has always had an interest in interdisciplinary collaboration.

“[Chimwemwe]’s writing and style of performance is so unique and nuanced. When the editor at CV2 approached me with this project, setting her work to music, it was a no-brainer,” she said.

Au said she was taking a similar approach in working with Undi as she has taken collaborating with lyricists such as John K. Samson and Carly Dow.

“I’ve taken a very similar approach to working with poetry – letting the words take the spotlight and creating an environment that lets everything breath,” Au said.

The launch took place on Jan. 26. Performers and poets included Undi, Au, Dow, Marika Prokosh, Joel Ferguson, Michael Minor, Kristian Enright, and Andrew Eastman. The event saw the launch of two open-themed issues, and one with the theme of convergence.

Prokosh read her piece from the “Convergence” issue, titled Help Wanted, inspired by a permanent partial loss of eyesight Prokosh experienced in 2015.

“The call for submissions asked for poems about survival, and I had spent much of the previous two years struggling to adjust to that,” she said.