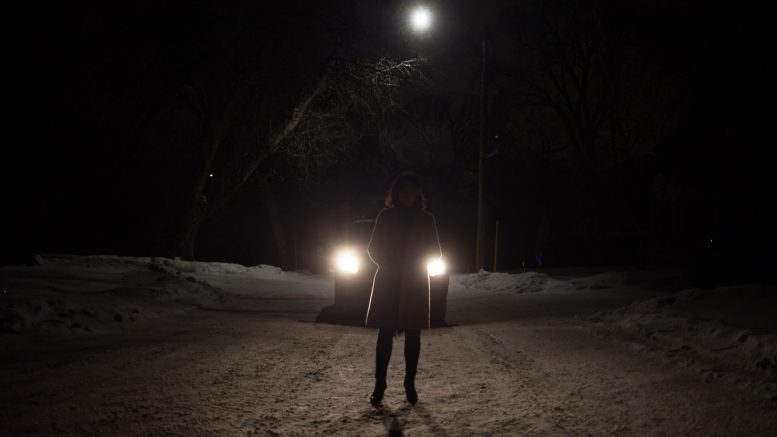 Elise Dawson, artist behind Auxiliary Feelings, an art performance that involves driving the perimeter of Winnipeg in her car to a somewhat-curated soundtrack

A social art performance by University of Manitoba graduate, and current member of AceArtInc.’s Cartae Open School, Elise Dawson blurs the line between audience and artist.

Dawson is taking the first steps for her project at Cartae, titled Auxiliary Feelings. The performance consists of Dawson and one volunteer driving around Winnipeg’s Perimeter Highway to a specific soundtrack. The point is to talk openly in a confined space about the performer and participant’s lives, creating a therapeutic artistic experience.

“So here I am being vulnerable with a stranger in my car that can be vulnerable in turn with me.”

Dawson graduated from the University of Manitoba’s school of fine art in 2012. She has since completed the foundational mentorship program at Mentoring Artists for Women’s Art, and a residency at the Performativity of Mortuary Rituals Program at the Arquetopia Foundation and International Artist Residency in Puebla, Mexico.

Dawson said that she came up with the conceptual idea for this project following the deaths of a pair of close friends.

“In the past two years, my life, I have really struggled with my emotions and I came up with this idea as a space where I could sit and celebrate something. A space that felt comfortable to me, that was more about sharing and caring at a primary artistic means of expression,” Dawson said.

“Grief taught me the value of performative acts.”

So far, one participant has taken the ride with Dawson.

“This person is more of an acquaintance, so what she shares with me and what I share with her really only exists in that space.” Dawson said.

Dawson is interested in the role of the audience in the performance, and exploring whether they become an artist alongside Dawson while riding in the car.

The two drove around Winnipeg in the dark, listening to music that Dawson called “depressed.” Dawson said she was surprised at how much it took out of her.

“It’s funny because I was trying to be as relaxed as possible, but I think whenever you’re sitting with someone in a space one on one there’s a certain exchange, boundaries that need to be navigated,” Dawson said.

Kara Passey is scheduled as one of the next participants. She has known Dawson since they were both students in the school of art, and volunteered on the project’s Facebook  callout seeking volunteers.

“I really love the conceptual qualities of her work, and how she does performances that aren’t necessarily for the benefit of an audience to view, but more to investigate into vulnerability,” Passey said.

“Elise and I have also connected on an emotional level over a lot of different difficult things in our lives, so when I saw that she wanted to basically spend quality time with people to discuss emotional responses to music, it kind of just sounded like a great way to spend some time together.”

Passey said “despair, or desperation, or depression” would be the theme of their car ride.

“Just recently I left a very abusive relationship and healing from that has triggered a rekindling of my passion for music that is vulnerable and raw and honest,” Passey said.

“I anticipate really intense conversation, which will hopefully be therapeutic and come away with some ideas for personal growth.”

Chantel Mierau, finance and administration manager at AceArtInc. and Cartae Open School committee member, said Dawson’s method is “very interesting and exciting,” though not entirely unheard of in performance arts to use the public as part of the piece.

“It’s not unheard of in performance art to break that fourth wall, as they say in theatre, certainly that happens quite a bit in performance art, even thinking back to work like Marina Abramovic, or Mierle [Laderman] Ukeles. She did [a piece] in the 70s where she shook hands with all the maintenance workers of New York sanitation services, all the garbage collectors,” Mierau said.

“Certainly, the artwork exists in a relationship between the performer and another person, who maybe would traditionally be called audience but they become a participant in the work.”

Dawson said that she approached a smaller community on Facebook in search of volunteers for this car ride. She considers these rides rehearsals for a larger project envisioned as occurring later this winter.