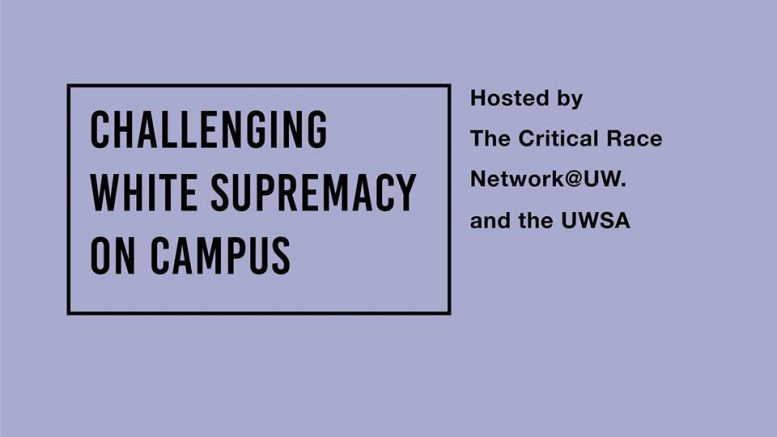 The event began at 6 p.m. and was first open to members of the Black Indigenous and People of Colour (BIPOC) community before the panel discussion opened for all attendees.

Sadie-Phoenix Lavoie, a recent graduate of the U of W and former vice-president external of UWSA, shared her experiences being stereotyped at the university as a result of her Indigenous heritage, saying she “had to be the one to defend my dignity and the dignity of my people.”

Alexa Potashnik, founder of Black  Space Winnipeg, said white supremacy could be seen in many different areas, including educational institutions, where it is deeply rooted.

“To address the question of where do you see white supremacy on campus, where don’t you see it?” she asked. “And you can’t disconnect white supremacy from the institution because the people who built this institution didn’t have people of the community in mind.

“And this trickles down to not just academia but into our school system and every aspect you can think of in society, in the Western world, in North America, [and in institutions] run by white people.”

Potashnik went on to caution against the tendency of members of the BIPOC community to water down their conversations to ensure inclusivity of the majority.

“People of colour really need to start becoming more comfortable when the majority are uncomfortable,” she said.

Jenny Heijun Wills, an associate professor of English at the U of W, said that although white supremacy exists in different forms, her   research and interests are more focused on institutions and areas where supremacy is not easily visible.

“I’m most interested in where we’re not seeing it, in the sense that it’s always a slippery moving target,” she said.

“And so it’s hard to peg down and it’s hard to challenge and confront because it‘s always shifting in certain ways.”

Wills added that white supremacy is invisible at many institutions not because it “has been resolved,” but because “it’s somehow mutated in a way that” it is not noticed.

Wills cautioned that the issue of white supremacy should not be approached with the intention of fixing a “broken system.” The system is not broken, she said, but is “working exactly how it was intended to work.”

Acknowledging her privileged position as an educator which provides a platform for her to be vocal, Wills also raised the issue of underrepresentation of BIPOC faculty members at the university.

Wills said one of the ways in white supremacy can be addressed in the university is “supporting the hiring of BIPOC faculty”  and ensuring their retention, giving them “the liberty to talk about issues in a radical and meaningful way.”

Lavoie stressed the importance of having discussions that shed light on the issue as a way of raising awareness and combating discrimination.

“White supremacy is here,” she said, “but you know what’s also here? It’s us, having this talk in that same institution having discussions about what needs to be done because it can’t be like this anymore.”