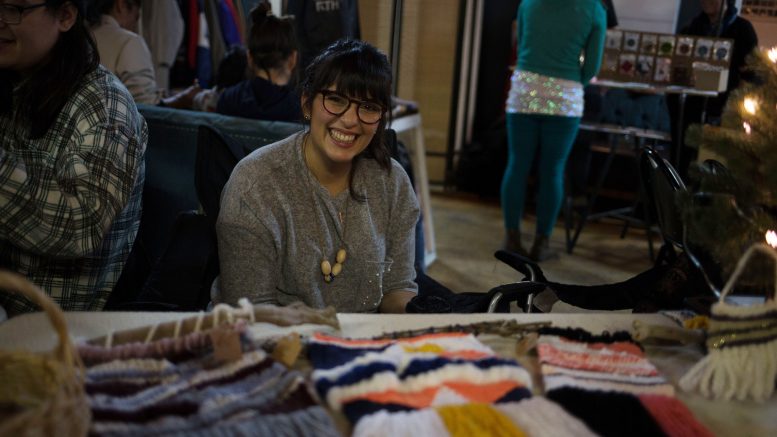 Irene Davies at the Prairie Loom Sisters table during the The Good Will Social Club "Good Tidings" event on December 2nd.

From farmers’ markets in the summer and fall, to holiday markets in the winter, buying local is easier than ever with these pop-up malls offering quality handmade and independently-produced wares.

On Aug. 23, Travel Manitoba released All roads lead to crafts, 2017 Manitoba craft shows list, that listed craft markets around the province from September to December.

Winnipeg hosted no fewer than 66 markets, with 14 taking place on Nov. 25 alone. Corey Lakusiak, a local jeweler, co-hosted her first market on Dec. 10, after over eight years of crafting and selling her work.

Lakusiak’s market, “Whole: A Mindful Holiday Market,” ran from 10 a.m. to 4 p.m. on Dec. 10, and featured 18 crafters selling a variety of goods including honey, jewelry, beard oils, and pottery.

“My partner in this one, Kalee Mund, [of] Rasa Holistic, and I have been friends for a long time and we were actually at a sale together in November,” Lakusiak said. “It was a really quiet sale so we had a lot of time to sit together and talk, and throughout that day we said we should put together a sale of our own of our friends and people we love and shop from all the time.”

Lakusiak said the market was a success, after having some difficulty booking a venue in the week prior to the event when the initial space wsa double booked.

Lakusiak said she thinks the holidays brings out shoppers. Hand-made jewelry made with semi-precious stones by Corey Lakusiak at her show “whole: a holiday market” at the Mitchell Block on December 10, 2017.

“Essentially, it’s a handmade pop-up mall, so you may not know exactly what you’re looking for, but if your vendors are varied, you’ll be able to browse,” Lakusiak said.

For Irene Davies, co-creator of Prairie Sisters Loom, this winter season brought her first experience of being a vendor. She and her sister Victoria Davies create woven wall decor. Irene Davies tabled at The Good Will Social Club on Dec. 2 for the Good Tidings market, which included handmade and vintage goods, and live music.

“I haven’t done anything like this before, this is our first foray into selling our crafts,” Davies said. “So, we made an Instagram account and got some custom orders through that, and that was the first sale we’ve ever done.”

Davies said she wasn’t sure the market at The Good Will Social Club was the right spot for her crafts, but also noted that she had sold a number of Christmas ornaments.

“I think if we had decided that we were going to do this earlier, we could have probably taken more orders and sold some more stuff, and even just marketing a bit longer before [the market],” she said. “We also could have gotten into some of those bigger markets.”

Davies said she thinks bigger sales like the Luckygirl Pop Up Shop and Third + Bird would have been better places for her crafts.

Both crafters also prefer to shop local and buy handmade. “I try not to shop retail,” Lakushiak said.

Davies said the personal touch of a handcrafted gift makes it all the more special.

“It’s just nice to know that your gifts or anything came from someone, like you’re supporting the makers directly and not, like, ‘The Man,’” Davies said. “I find those are the most special presents and people really appreciate stuff like that.”

At the same time, Davies recognizes that handcrafted items can have a higher price than similar products from a retail outlet.

“It’s an expensive time of year, so it’s sometimes hard to justify shopping local if they can get it cheaper somewhere else,” she said. “And sort of pricing our stuff is where I learned the value of what something handmade is.”