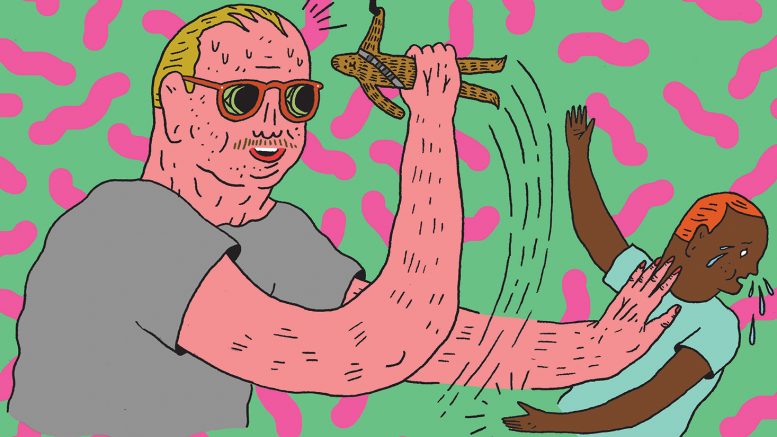 Male entitlement is curdling in the last vestiges of its media empire – and it’s about time.

As popular culture has begun to diversify its character portfolio with nods to racial, sexual, and gender minorities, economically empowered straight white men have begun to air their grievances. One of the dominant themes of contemporary popular culture has been the resentful reaction of this elite cultural bloc to their dwindling control over popular media.

For once upon a time, in a galaxy far, far away, the straight white man reigned supreme. There, he saw his visual form represented across all mediums. Any story was bound to be his, with narrative arcs and thematic devices playing faithfully in tune with masculine hero tropes. Luke Skywalker was a solitary saviour who need only hone his innate powers in order to save the day and his ultimately dependent friends. Han Solo was but a selfish hustler using masculine charm to get the things and people he wanted, without regard for their agency. Rambo was the paragon of magnitudinous male physical power. Special Agent Rick Deckard from the original Blade Runner was a portrait of masculine independence and aggressive sexuality. The list is nigh inexhaustible.

Historically and to this day, society’s media machine has been curated by a certain masculine vision. In a study spanning mainstream media between Sept. 2014 and Aug. 2015, the University of Southern California (USC) found that even in the so-called era of ‘political correctness,’ as deemed by detractors of diversity, film and television remain barren to all but the leading straight white man.

The numbers shrink even more: only two per cent of all speaking characters were identified on the screen as gay, lesbian, or bisexual, whereas less than one per cent – in other words, seven characters in total – were transgender.

We may reasonably assume preceding decades were no less – but rather more – abstinent in fostering diverse representation on the screen, silver or otherwise. We may also conjecture that things have not so radically changed in the past two to three years. In 2018, media is no cornucopian host to harmonious celebration between minorities and majorities. Indeed, there are numerous instances that show the opposite holds: as seen through a few seminal case studies, the straight white male majority has been agitating against the modicum of positive change occurring for minorities in media.

First, there was GamerGate in 2014. The morally depraved movement began as an online harassment campaign directed against Zoë Quinn, she who committed the cardinal sin of – well, being a woman in ostensibly male territory.

Quinn released a text-based game that was meant to simulate the experience of depression for its players. Reaction to Quinn’s game promulgated GamerGate when an ex-boyfriend accused her of corruption and sleeping with five other men during their relationship. GamerGate culminated when hordes of geeky misogynists used these false accusations as ammunition for launching threats and slander against women in the industry. They crowned “social justice warriors” as the principal enemy responsible for ruining the sanctity of gaming.

We may easily translate these words spoken by ‘harmless’ geek guys into the language of male misogyny: a movement consisting of straight white men reacted with violence and intimidation to the prospect of losing its territorial boundaries around an industry that frequently sees minorities harassed out of participation.

Then there was the 2016 Ghostbusters remake. News of a celebrity-studded female cast for the franchise’s reboot saw vocal fans react with critical scrutiny unlike anything seen before. The film was disparaged from every possible angle, with the trailer receiving a record-breaking amount of dislikes and the movie itself being subject to intense outcry, varying from impassioned denunciations to boycotts verging on the political. It was as though revamping the franchise amounted to spitting on the grave of the original. This is despite the 1984 film relying entirely on nostalgia for its charm, alongside a harebrained blend of clumsily written dialogue and clunky comedy. Not so curiously, it seems that seeing oneself represented on the screen is enough to make a film enjoyable for its audience.

Finally, late 2017’s Star Wars: The Last Jedi. Fan reaction to the latest installment of this decades-old, gargantuan franchise spawned intergalactic comment thread warfare. Fans accused the film of obliterating the saga which preceded it, of failing to treat its past with reverence, and of capitulating to an ideological agenda of political correctness. Indeed, fans itching to pen manifestos have crowed accusations that the new trilogy is merely an instrument for helping the public digest progressive politics.

The Star Wars reboot has been called outright propaganda, with allegations that the casting of Finn – the first major black character of the series – constitutes an assault on meritocracy. According to this logic, every auditioning black actor was second in kind to auditioning white actors. That’s not meritocracy – it’s white supremacy. Similarly, the purple-haired Admiral Holdo is known as Admiral Gender Studies among fans who believe the character’s inclusion is a tool for emasculation and matriarchy. Of course, the portrayal of women in power violates supposedly natural patriarchal norms, and so any challenge levied against masculine authority is automatically deemed a strategy for sinister subversion.

Rank and file positions among this enlightened vanguard include the belief that the character Rey is a “Mary Sue” – slang for an unbearably perfect female individual – given she simply performs tasks too well and with too much ease. Never mind that in A New Hope, Luke Skywalker singlehandedly obliterated the most deadly, heavily armed space station known to Star Wars all while successfully evading the pursuit of Darth Vader, one of the most formidable individuals in the series’ lore. But Skywalker isn’t a Mary Sue, because Skywalker is a man and, if you haven’t realized, men can’t be Mary Sues. The point here is that the practice of naming and shaming Mary Sues is ubiquitous to female characters. This never applies to a history of masculine characters whose heroics defy logic and circumstance.

What recurs in each of these cases is a wave of backlash from entitled male fans against new media projects that seek to expand cast diversity. Having once commanded total power over the media, straight white men are now feeling the effects of having their power checked. Such is the source of their righteous rage against popular media that fails, in their eyes, to give them the cultural space they deserve. This is telling when one recalls that male characters and white characters respectively make up a little over 70 per cent of speaking roles onscreen. Men are obscenely demanding uber-supermajoritarian status in media with the further assumption that they are entitled to it.

Alas, the mythology of masculinity so revered by the hardcore upper echelon of male fandom is under deconstruction. The empire is falling, and champions of its cause are furious, but, so too are those who chair the wrecking ball, only in different kind. Where the old cultural landscape hosted space exclusively for certain characters, the new terrain under construction has a blueprint for broadcasting inclusive representation on the screens of popular media’s virtual reality.

Long live this radical vision – and may entitled straight white men everywhere accept that the curtain is coming down on their time in the limelight.