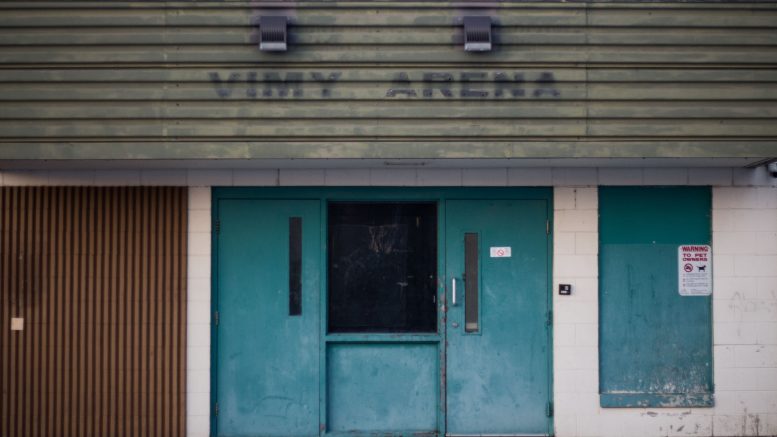 Plans to build the Addiction Recovery Centre in replace of the Vimy Arena faces push back from the local community.

Canada is in serious trouble, and it is petty politics that’s preventing a solution.

In 2016, more than 5,800 people were hospitalized in order to treat opioid toxicity. That translates to 16 Canadians being admitted per day, a 20 per cent increase from the previous year. Again in 2016, at least 2,816 Canadians died from opioid-related overdoses.

If you’re thinking this has no effect on you because you haven’t experienced it personally, think again. A Canadian Centre on Substance Use and Addiction study conducted in 2002 examined the total cost substance abuse enacts on society and found that illegal drugs account for $8.2 billion. Since hospitalization over opioid poisoning has jumped 53 per cent in the past decade, that number could easily be over $12 billion.

It seems most of us can agree that a more serious approach must be taken toward rehabilitation for those struggling with drug addiction. It’s the execution of this approach that seems to polarize people, which brings us to the St. James-Assiniboia area.

Sportscaster Scott Oake is attempting to aid in the opioid crisis – proposing the opening of a long-term addiction recovery centre on the site of the shuttered Vimy Arena. It would be in memory of his eldest son, Bruce, who died in 2011 from a heroin overdose. Through funds donated to Oake’s non-profit organization, Bruce Oake Recovery Centre, the end goal is the creation of a $14 million, 50-bed facility aimed at long-term treatment.

In order to do this, however, Oake needs city council to vote – two-thirds in favour – to transfer the land from the city to the province, which is setting up a sticky situation. To get re-elected, these politicians require votes from their constituents, which includes those suffering from “not in my backyard” (NIMBY) syndrome. Symptoms include refusing new proposals because the developments will occur too close to the NIMBY patient in contravention to their narrow self-interest.

It is politically obvious that it’s much easier for politicians to pander to those with unfounded concerns than it is to educate them on the realities of drug addiction and its treatment.

Both St. Charles Councillor Shawn Dobson and Assiniboia MLA Steven Fletcher have cowardly opposed the project, and their allies in opposition have made the whole process unnecessarily stagnate. Those against the project care more for their houses than their co-citizens’ health, justifying opposition with appeals to self-interest, arguing a recovery facility would drop the value of surrounding properties. They have also spread the nonsensical idea that recovering drug users will bring a groundswell of criminal activity into the community. These are easily contradicted with facts from case studies from all over the globe – including, recently, in Calgary. No concerns voiced by the opposition have materialized. Unfortunately, people who believe these blatant falsehoods have no interest in facts.

These unfounded concerns bring to light a constantly recurring theme in Winnipeg: NIMBY syndrome. I get flashbacks to 2011 when Habitat for Humanity proposed affordable housing for low-income families in Winnipeg’s Riverbend neighborhood, near where I live. People were in a panic when the idea was first brought forward – complainants expressed concern over their property values, along with “crime, drugs, drinking parties, and pimping.” Sound familiar? Yet, over four years since the affordable housing’s successful construction, none of those concerns materialized whatsoever. Still, communities obviously aren’t learning from these developments. Perhaps a more fitting license plate slogan would be Disdainful Manitoba.

The underlying issue in a case like this is the uniting force behind many opponents of social progressivism, which is simply a lack of empathy.

The failure to empathize with those who struggling with drug addictions, for instance, is holding back the political momentum of projects that aim to ameliorate problems surrounding drug use. This heartless approach to politics is in part responsible for Canada’s detrimental gradualism on social issues like these.

The politics surrounding the disastrous war on drugs have prevented any kind of significant solution to them from coming to Canada. If politicians are going to continue to cater to the selfishness of their voters, we will see the war on drugs continue to fail, and we as a society will suffer even further. We must learn from countries like Portugal, who have put people over politics on these issues, and are a much more productive country because of it.

Until Canadians face the facts and our politicians approach issues like drug addiction in a seriously empathetic manner, the problems surrounding them are only going to accelerate.

Sick notes are not proof of illness