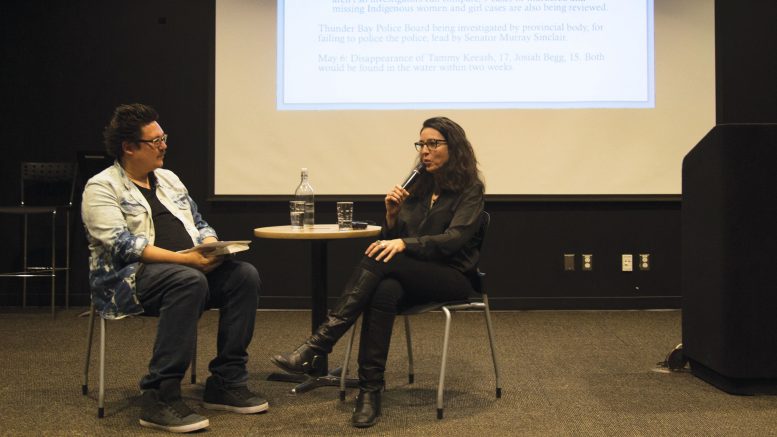 Investigative journalist Tanya Talaga  – revered for her coverage of missing and murdered indigenous women and girls and the Rana Plaza  disaster in Bangladesh – visited the Winnipeg Public Library Nov. 16 to discuss her new book, “Seven Fallen Feathers: Racism, Death and Hard Truths in a Northern City.”

The four-time nominee for the Michener Award for public service journalism said the book is reflective of Canada’s failure to respect the human rights of Indigenous peoples of Canada and aims to shine a light on the deaths of seven First Nations students between 2000-2011 in Thunder Bay, Ontario.

Talaga is of Ojibwa descent and her maternal grandmother is from Fort William First Nation, near Thunder Bay. She has extensively covered stories that focus on the inequities faced by Canada’s Indigenous populations.

“This is not just the story of Thunder Bay – it is the story of Canada,” she said. “You can see myriads of this in communities all over this country.”

Talaga presented an address telling the audience how she came across the story of the Thunder Bay students while working on a project that focused on Indigenous participation in voting in Thunder Bay during the 2011 federal elections.

During an interview with Stan Beardy, then-grand chief of Nishnawbe Aski Nation, she said she was stunned to learn that Jordan Wabasse was the seventh Indigenous student who died or went missing in Thunder Bay since 2000.

Surprised at what she characterized as a lack of a national spotlight on the deaths, Talaga said she was moved to investigate and write the book.

Without facilities in their home communities, hundreds of Indigenous youth are sent to Thunder Bay to complete high school every year.

Talaga discussed the failure of government policies toward preventing the deaths, pointing to the inequitable funding available for education and social services for Indigenous youth.

“Today, we still have kids that don’t have high schools to go to [in their home communities] and that is why the seven fallen feathers were in Thunder Bay.”

Talaga said it is astonishing that even in 2017, Indigenous children from Northern communities have to move as far as 600 kilometres away from their home communities to urban centres in the pursuit of a high school education, “which is the right of every other Canadian child.”

She said the students experience cultural shock followed by a difficult adjustment to the urban communities.

Talaga said that in addition to a lack of high schools, schools that do feature Indigenous curriculum – such as Dennis Franklin Cromarty High School in Thunder Bay – do not receive equitable funding for education when compared to other non-Indigenous children.

“Part of the problem is that when you have Indigenous-run schools, it’s great but the federal government isn’t giving them money that’s on par with all the other non-Indigenous kids,” she said.

Children in Indigenous run schools receive about $2000 to $3000 less in funding compared to the funding available for children in other schools.

“It costs a lot more to operate in northern areas,” she said. “If there is a problem you have to fly children back and forth. That costs a ton of money and you are often taking it out of your operating budget.”

Lack of equitable funding, Talaga said, is “another form of colonialism” and goes beyond just gaps in funding for education including the failure of the federal government to implement Jordan’s Principle.

Jordan’s Principle, which lays out the process to follow in a jurisdictional debate over who pays for services for Indigenous children, is named after Jordan Anderson, who died in a Winnipeg hospital while the federal and Manitoba governments debated who was responsible for the specialized care he required.

Talaga shared instances of racism experienced by the Anderson  family in Thunder Bay when they inquired about the wherabouts of Jethro Anderson, who didn’t return home one night. Anderson was the first of the seven students to go missing.

Talaga said the response received by the family was, “’Oh  don’t worry about it, he is probably just out there just partying like all the other native kids,’” which she said highlights the prevalent institutional racism.

“The Ontario government has stepped in and the Thunder Bay police are being investigated for systemic racism against Indigenous people in Thunder Bay,” she said.

The final report of the investigation into the police board is due on March 31, 2018. In a conversation with the Manitoban

Manitoban: In 2016 the Canadian Human Rights Tribunal acted on a complaint from the First Nations Child and Family Caring Society of Canada and ruled that approximately 165,000 First Nations children have been discriminated against by the Federal government. Ottawa continues to spend tax payer dollars in fighting three more non-compliance orders from the tribunal to enact Jordan’s principle. Is this double standard sort of perpetuating racism in Canada?

Tanya Talaga: That is still an issue that Cindy Blackstock and the First Nations [Child and] Family Caring Society [of Canada] has had to fight for over 10 years after Jordan’s Principle was unanimously supported in parliament in 2007. It’s remarkable, you know. It’s totally a double standard and Canada just needs to get its act together. It’s like “What are you doing? Are you going to be equitable and do all the things you are saying you are going to do, or are you not?” So right now, it doesn’t look like you are.

M: Prime Minister Justin Trudeau, during the election campaign in 2015, said that reconciliation was going to be a priority for his government. Fast forward to 2017, Canada is yet to fully adopt and implement United Nations Declaration on the Rights of Indigenous Peoples. Any thoughts on that?

TT: I talk about that a little bit in the book as well about how there were countries such as Canada and Australia that said that they were not going to support the declaration. And that was like a slap in the face to everyone. The Trudeau government is now saying that they are going to support it. Apparently there is movement towards that and so one can only hope that that’s true.

M: What does true reconciliation look like for Indigenous Peoples of Canada?

TT: Having equal footing. Being treated just like everybody else. Having an equal chance to be in high school in your home community so you don’t have to travel away from home just to get a high school education. That should be the right of any Canadian, any Indigenous or non-Indigenous kid. The same health services, the same social services no matter where you live. That’s equity. And also an end to the child welfare, the discriminatory child welfare practices and also a relook at the justice system and what is going on in our prisons.

M: How can racism be addressed which is so deep rooted in our institutions such as the police and the correctional services?