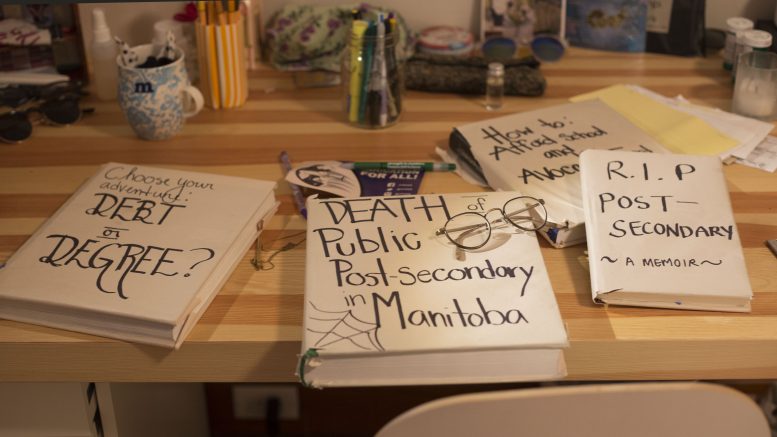 Members of CFS-MB booted out of the Legislative building after peacefully protesting in front of the Premier’s office.

Students and others partaking in a peaceful sit-in protest to oppose Bill 31 outside Premier Brian Pallister’s office were escorted out of the Legislative Building Nov. 8.

The protesters were opposing Bill 31 – the Advanced Education Administration Amendment Act – that was introduced to the legislature in March. The bill rolls back legislation put in place by the NDP in 2012 that holds tuition increases to the rate of inflation.

The bill went back to the legislature for a third and final reading Nov. 9. Following an all-night legislative session, the bill was passed into law in the early morning hours on Nov. 10. The bill permits post-secondary institutions to increase tuition by five per cent on top of the rate of inflation annually beginning in the 2018/19 academic year. The law also lifts restrictions on course-related fees.

Annie Beach, aboriginal commissioner for Canadian Federation of Students-Mantioba (CFS-MB), said the students aimed for the protest to be peaceful and respectful, without blocking any doorways.

“Our goal for the day was to peacefully and respectfully demonstrate, the last day before the provincial government [was] to vote on the bill, to share our voices and opinions one last time on behalf of over 4,000 students who oppose Bill 31,” Beach said.

According to Beach, security personnel told the protesting students they were not allowed to perform acts of protest inside the Legislative Building.

“We were not chanting, simply reading books and quietly working on homework for classes we are currently in,” Beach said.

Beach said that 10 minutes into the sit-in, security guards arrived and said they had received a complaint via phone call about students being a possible threat and disrupting business.

“The security offered, and then revoked, the option of sitting in the library of the [legislature], and told us we needed to leave the premises altogether,” said Beach.

“We made it to the front entrance lobby of the legislature, and even had our visitor passes removed.”

“Student leaders are not delinquents or trouble-makers,” he said. “We have been devoting countless hours and energy the last few months to trying to stop a bill the students we represent and go to class with each day have told us they do not want.”

“We are not selfish,” added Sanderson. “We are looking out for students and prospective [students] that are less privileged than ourselves and who need an accessible path to post-secondary education in order to improve their lives and the lives of their family.”

During the Nov. 10 question period, Pallister referred to the sit-in protest as a “rebellion.”
Towards the end of the question period, students seated in the public gallery unfolded banners reading “Stop Bill 31” and dropped leaflets onto the chamber floor.

He said that the Manitoba legislature is a “people’s house” and citizens wanting to participate in the democratic process should be able to do so.

“This should especially apply to students who are the future of this province and who are often derided for their apathy.”