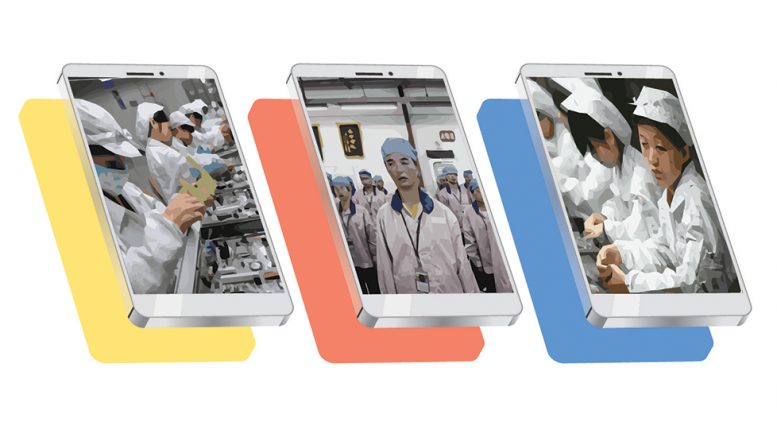 Addressing the plight of workers across the globe? There’s not an app for that.

But there are apps for all that is trivial: from flinging birds into structures for compulsive yet idle gaming to blasé photoshopping for the Instagram-savvy. All this comes into our lives through the handy nature of our inseparable relationship with smartphones and a particular kind of rampant consumer culture that has grown out of them.

The collective expense, however, amounts to more than the year-long contracts customers sign in order to get their latest fix of techno-luxury.

In 2014 alone, companies such as Samsung and Apple produced together no less than 94 new cell phone models. Apple itself released two, while Samsung churned out 56 new models. But quantity isn’t quality, especially in terms of labour practices: both mega-corporations have been accused and found guilty of widespread labour violations, if not what could be properly characterized as human rights violations.

That is, labour rights are human rights.

As a central mode of organization in human lives – and an essential, brute fact of living – work rights should be similarly endowed to individuals as is the case when it comes to other liberal platitudes, of the likes of life, liberty, and property, so long as we live in a rights-oriented society. Unlike its fellow abstract rights, however, work rights must be materially meaningful.

This is not the case in most areas of work-life, especially so for the regime of cellphone production that dominates the manufacturing world over, a world conveniently located for the most part outside the immediate sphere of Western society. There, human rights violations via labour rights violations are crucial cogs in the profit machine.

A 2016 report issued by the International Trade Union Confederation found that 94 per cent of Samsung’s supply chain workers were being paid poverty wages in radically unsafe conditions. Efforts of workers to build political power under the solidarity of an organized union were also prohibited, as Samsung forbids the formation of unions among the rank and file of those workers whose manual labour constitutes the backbone of their production line – and thus of the profit machine itself. Samsung even provides instructions to its managerial staff on how to identify and isolate union-friendly employees from acting out on the rights granted to them by international law, as codified through the United Nations.

Now, Apple and Samsung don’t only compete in terms of sales. The two multinational corporations are also neck-and-neck when it comes to labour practices of the heinous kind just mentioned. Apple, for instance, dealt with the public relations fallout of a suicide epidemic at one of the Chinese factories that produce its wares in 2010 when 14 workers jumped to their deaths. Another 18 workers attempted suicide, while 20 were persuaded by factory officials not to make the leap. Media exposure after the facts uncovered prepared suicide notes that described conditions conducive only for slave labour.

Both Apple and Samsung have been accused of advancing negligent procedures for ensuring child labour is not a part of their supply chain. Human rights watch organization Amnesty International reported that children working in mines for the extraction of materials used in phone production – namely, cobalt for lithium-ion batteries – was a widespread practice in the Democratic Republic of the Congo. When asked by Amnesty International as to the source of the phone materials used in their production lines, Apple and Samsung refused to disclose the necessary information that would clear their names – or, condemn them.

Again, a necessary enabling feature of our smartphone feeding frenzy is precisely these kinds of labour practices. Were workers to be paid a dignified wage and receive proper compensation, for instance, then the glitz and glam of a cellphone would cost Western consumers to contract into bonded labour themselves. Yet wanting to perpetually recline in a La-Z Boy does not justify sentencing others to a lifetime of stools and squatting.

The cellphone industry in North America is an exercise in opulence. To sustain this requires the brutal subjugation of a workforce that is necessarily disposable. In the midst of the newest and most dazzling releases of shining supercomputers which fit in the palm of our hands, we must ask ourselves: is it worth it?

Not in terms of the brute monetary value. Cellphones, while artificially suppressed in price by crypto-feudal labour practices, are just as surely inflated in price by the mechanisms of modern markets dominated by brand value. Rather, is the iPhone X or upcoming Galaxy X worth the humanity it costs to produce endless streams of upgrades and improvements?

It’s fairly easy to catch a glimpse of your reflection in the slickest phones on the market. Knowing what went into making such a phone, will you be able to hold your gaze? A mainstay of left-wing Internet humour is the joke-turned-theory that there exists no ethical consumption under capitalism. If only reality could be so humorous.

Municipalities must focus on public housing, not evictions