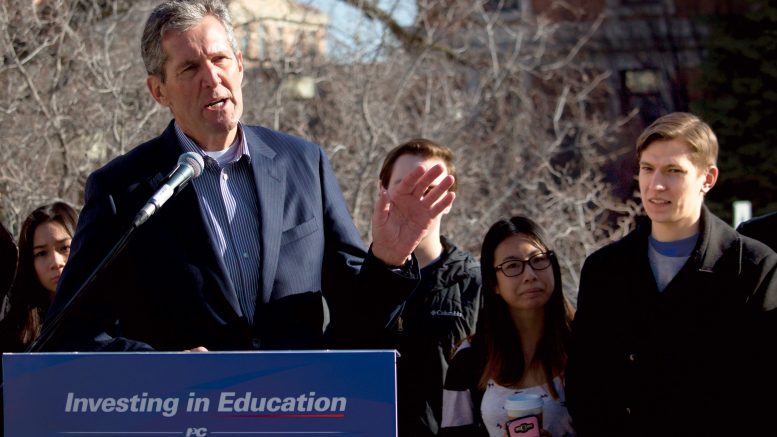 Brian Pallister vowed to increase scholarships and bursaries available to students from 9 million to 20 million in March 2016.

By Imreet Kaur, with files from Levi Garber
Image by Garett Williams November 1, 2017

During the campaign leading up to the 2016 Manitoba provincial election, the only Progressive Conservative platform plank that reached into post-secondary education was a promise to increase funding to the Manitoba Scholarships and Bursaries Initiative (MSBI) by partnering with the private sector.

The PCs aim to increase the initiative’s funding from $9 million to $20 million by appealing to the private sector to contribute two-thirds of the total target amount.

Minister of Education and Training Ian Wishart said last week that the altered funding model of the MSBI will increase support for post-secondary students in Manitoba, especially for students from low income backgrounds.

“We are actually quite pleased to be very aggressive in terms of providing additional support for low income students,” he said. “We changed the Manitoba Scholarship and Bursary program. We have targeted it at low income students.”

However, according to the information gained from an NDP-filed freedom-of-information request, the department of Manitoba Education and Training has managed to raise only an approximately $1.8 million in the first six months of a one-year fundraising project scheduled to end with the 2018 fiscal year.

“That’s a part-year number,” said Wishart, saying the current total irrelevant because the government has six more months to reach the targeted $13 million in private investment.

“We are just checking to see how we stand against the norm for this type of year,” he said, “but 90 per cent of the money comes in the last quarter, so I am not surprised that it’s low.”

“I suspect that we will find that it is greater than it was this time last year and that we are moving in the right direction but I have yet to verify that,” he added.

Matt Wiebe, NDP education critic, expressed his concerns about the overall changes being made to post-secondary education in the province.

“At a time when students are getting hit with higher tuition as a result of this government’s actions, increased interest on student loans, removal of tax rebates, the cost for students is going up,” he said. “And the answer that this government had was that bursaries will soften the blow.”

Wiebe said the government’s shortfall in raising the targeted amount will make post-secondary education inaccessible for Manitobans as “students won’t be getting the bursaries that they need to make education affordable in this province.”

“Students are anxious,” he said. “Students are worried about tuition and now the bursary program is not meeting its goals.”

Additionally, the freedom-of-information request revealed that the province undertook an advertising campaign, borne by MSBI itself, “to convince students bursaries would be there for them,” Wiebe said.

“There is no plan to increase that amount of money,” he said. “There is a reliance on the private sector to step up but no additional resources or persuasions or reasons why [they] should step up in that way.”

“This program is well underfunded,” he added. “It was not meeting the needs of the students to begin with and now with the shortfall, we are concerned that it is going to miss many students who are going to see tuition as a barrier to get into university.”

Wiebe said that a careful partnership with the private sector has helped make sure that resources are available to students but increased reliance on the private sector without assurance of returns or the lack of foresight to “address this shortfall” is concerning.

More than hundred students marched from the University of Winnipeg to the Manitoba legislature Oct. 26, protesting against the proposed tuition hikes under Bill 31, organized by the Canadian Federation of Students (CFS) on Thursday.

Sadie-Phoenix Lavoie, national representative of the Circle of First Nations, Métis and Inuit students with the CFS, argued that depending on the private sector to raise money for post-secondary education is a short-sighted move that will adversely affect the ability of many prospective students to attain a university degree.

“They are saying that they are tailoring this for low-income students,” said Lavoie.

However, applications go “through the endowment of the universities and a lot of those scholarships are predominantly merit based,” she added. “So a lot of the low-income students are actually not getting that access.”

Lavoie said students are disappointed and have lost trust in the current government because they will now be paying higher tuition.

“Ultimately, the responsibility to fund education is [with the] government,” she said.

“We’ve been pushing for the Manitoba government – even federal government – to fund and invest in students and education and they’re off-loading that responsibility to the private sector.”

U of M reorganizing 20 faculties into 13