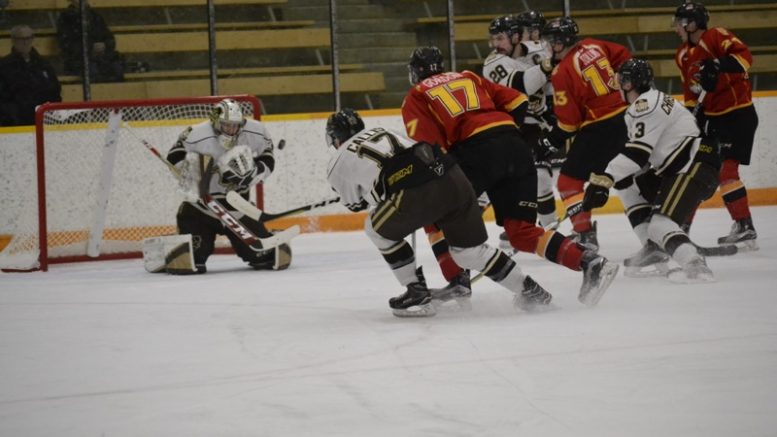 Bison goaltender Byron Spriggs makes a save against the Calgary Dinos on Friday, Nov. 24 at the Wayne Fleming Arena. Manitoba won 3-2.

The Bisons won 3-2 on Friday night, but fell 4-0 on Saturday afternoon, failing to hold on to third place in the Canada West.

Led by Michael St. Croix’s two points, the Bisons edged the Dinos 3-2 at the Wayne Fleming Arena on Friday.

“It was a big game of course against Calgary, to find a way to win that’s a huge two points for our hockey team,” said Bison head coach Mike Sirant.

The first period was largely dominated by the Dinos, forcing 11 saves out of Manitoba’s starting goaltender Byron Spriggs. Spriggs made a huge stop on a 2-on-0 when Manitoba was on the powerplay early in the frame. Despite Calgary’s dominance, Kamerin Nault tipped home a St. Croix shot from the top of the circle for his seventh of the campaign nine minutes into the first.

Logan Fisher answered back a few minutes later for the Dinos on a spin-o-rama shot from in tight, completely stunning Spriggs.

In the second period, Manitoba had a powerplay to start, but it was the Dinos who struck shorthanded. Luke Harrison worked his way down the boards and squeaked in a wraparound attempt.

Manitoba drew level on the powerplay towards the end of the second that has done them so well at home. A Channing Bresciani point shot was tipped dead by Quintin Lisoway, but Lisoway stuck with it and shoveled the puck into a gaping net.

The third period had a next-goal-wins feel, with both teams playing a tight checking game. St. Croix gave the Bisons the lead with six minutes to go when he came barreling down the left wing and fired a shot high over Matt Greenfield’s glove. St. Croix faked the pass across to Nault, but elected to shoot, and was rewarded.

“I always think pass,” he said after the game. “I definitely wanted to pass it over there initially, it kind of closed off fairly quickly so I decided to shoot the puck for once and it went in.”

Calgary’s explosive third period was the difference in a 4-0 win in the Saturday afternoon rematch.

The opening 40 minutes could be summed up by Manitoba’s squandered powerplay opportunities, failing to score on nine attempts. The herd had an extended 5-on-3 early in the first period and failed to capitalize although Zach Franko appeared to score one, but the referee deemed it a no goal. The Bisons also had a four-minute powerplay at the end of the second period, and failed to convert again.

“We had some good puck movement, we had some good chances, we just needed more urgency on the powerplay,” Sirant said. “We didn’t do that, especially on the four-minute penalty that we had in the second period.”

Chris Collins of the Dinos scored the eventual game winner 30 seconds into the third period on a partial break, slipping the puck past Spriggs. A few minutes later Drydn Dow slotted home a rebound in the bottom corner to make it 2-0. Robbie Fisher scored with eight minutes remaining to put the nail in the coffin of Manitoba’s chances.

“We had a chance at home after last night’s game to move ahead of Calgary and stay ahead,” Sirant said. “We missed an opportunity, we needed to score some of those goals early in the game, we had some powerplay opportunities in the game and we had some good chances to score […] but Calgary competed and had more effort than we had today.

With the loss, the Bisons fell back to fourth place in the Canada West with a 7-5-2 record, sitting one point back of the Dinos.

Manitoba wraps up the first half of their regular season on the road in Vancouver for two games against the UBC Thunderbirds on Dec. 1-2.

Serhan feeling right at home with the Bisons