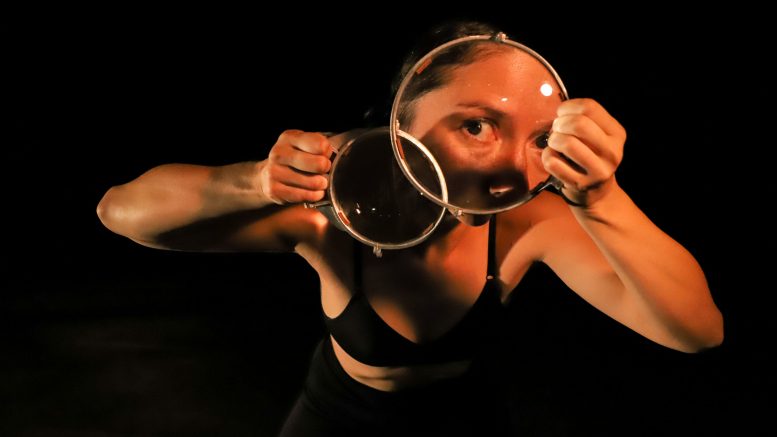 Winnipeg’s Contemporary Dancers (WCD) artist-in-residence Danielle Sturk is collaborating with local dancers to produce a piece that looks at human connectivity through the lens of a camera. The world premiere of integrated contemporary dance and camera performance flesh + machine will run from Nov. 30 to Dec. 2 at the Rachel Browne Theatre.

Desires, intentions, and personality are meant to be exposed through the piece’s dance and camera manipulation which explores inter-relationships, intimacy, and public space. Sturk graduated from the University of Winnipeg with a Bachelor of Arts in film and theatre. She has performed nationally and internationally as a dancer and choreographer with the Royal Winnipeg Ballet, Anna Wyman Dance Theatre, and Winnipeg’s Contemporary Dancers, as well as co-founding and co-directing Graffiti Tango dance company in Montreal. Sturk’s impressive resume doesn’t end with dance as she also works and creates with film and television.

Her films have played at more than 30 film festivals and broadcast on networks including CBC, the Aboriginal Peoples Television Network, and for the National Film Board of Canada.

The performance will feature the moving bodies of five Winnipeg dancers as well as old technology like cameras, lenses, dollies, and projectors, where the mechanics of the tool are visible, as opposed to current technology that captures images, like smart phones. The camera is deconstructed during the performance to explore different ideas about how people see each other and themselves.

“Our art world has been playing with technology for some time now in theatre, dance, and music performance. Art installation and performance art have done a lot to explore the meeting of these elements,” said Sturk.

“Flesh + machine is less technological as it is mechanical. It does use modern technology – cameras, projectors, lights – to assist in supporting the images and themes I am proposing in this work, but the work itself is not about technology proper.”

Sturk said that while constructing the piece, the dancers that she hand-picked did an amazing job at breathing life into the concepts to create a stunning piece of work.

The process of creating a piece uses different methods, explained Sturk, beginning with key words and ideas and developing them into movement.

“The flesh of a fruit, our muscles, bones, organs, mollusks, a consistency that is dense yet soft, alive, a part of something bigger – these are responses from the dancers. And so then, how can we move like any of these things that came up as images?” she said.

“After the dancer works a physical improvisation with one of the ideas, we go further: if having flesh means being alive, then it also means being mortal. So how does movement show mortality? We explored how the parts of the body, the flesh, the mechanisms, would move if they started to break down.”

Sturk said the piece can appeal to a wide audience because we all are part of a society that is caught up with its own image. It would also be attractive to someone who is curious about how technology affects humans. “The piece can appeal to anyone who has not thought about the insides of their technology, the invisible sending of signals in their phones and computers, and who would enjoy seeing us take apart, play with and put together parts of a machine that captures our image or shares it,” said Sturk.

“It appeals to a generation that use[s] this technology naturally, as an extension of themselves.”

Contemporary dance is an art form without words to tell the story. Sturk said that contemporary dance should not have to be understood but felt, like listening to a foreign language. “We don’t need to concentrate on the words, or try to understand what they are saying specifically, but listen to the cadences, the singing of it, the emotion in it,” she said.

“That provides us a certain understanding of what is being communicated.”