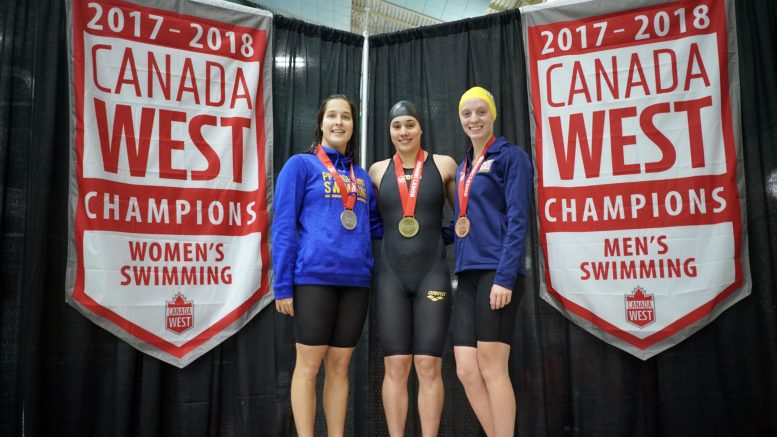 Bison swimmer Kelsy Wog (middle) with one of three of her gold medals at the Canada West Swimming championships in Victoria. Wog was also named Female Swimmer of the Meet.

Kelsey Wog was the big story for the University of Manitoba coming out of the Canada West Swimming Championships.

Wog was named the woman swimmer of the meet after she collected six medals – three gold, two silver, and a bronze.

Wog was part of Manitoba’s bronze medal-winning 4x100m relay team that finished with a time of 3:50.14. She was also apart of the relay team that collected silver in the 4x200m relay. On the final day of the meet, Wog won the 200m IM with a time 2:09.29, breaking yet another championship record.

Both the men’s and women’s team finished in seventh out of the eight teams at the Canada West championships.

The Bison swim teams will be back in the water Dec. 14-17 at the Pan Am Pool in Winnipeg for the Man/Sask Short Course Championships.

Getting to know Kelsey Wog