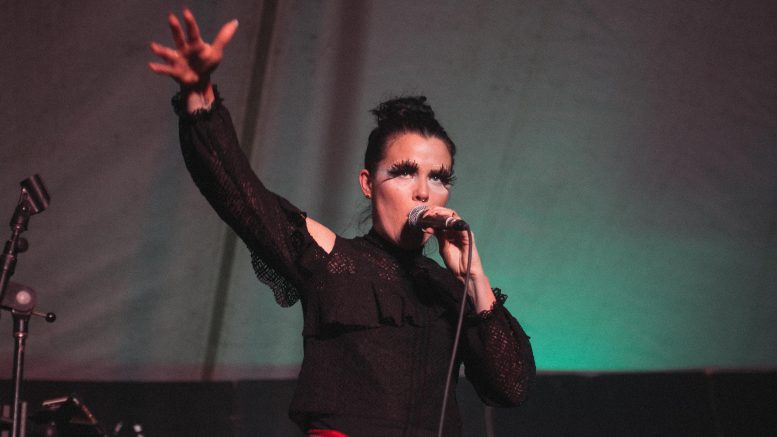 The new album from IsKwé, called The Fight Within, is a grand experience of heavy electronic music.

Dedicated vocal lines take flight in a landscape marked with rocky hills of percussion, covered in the soft deep greens of synths. Overall, the album carries an epic feel, each song building into large sounds that carry over a few bars at a time, while maintaining a weight and an almost dark seriousness.

IsKwé is an Indigenous singer-songwriter from Winnipeg. Many songs deal with content related to IsKwé’s community, like “Nobody Knows,” which contains lyrics about missing and murdered Indigenous women. Despite the serious content throughout the album, many songs are upbeat with modern and dancey electronic sounds.

The album opens with a prelude that IsKwé produced herself, the only track she created entirely on her own. “Ice Walker” starts off with soft synths over a cackling percussive line, before gradually building into a full stop. The next song follows at a similar tempo, but with a decidedly crisp drumbeat that pulls listeners into a gentle head bob.

The third song, “Healers,” starts off with the line “This one is written for my people, who are still hurting, divided by the many lines of faith,” then begins to build tempo through the vocal line while sharing more on the ongoing struggle of IsKwé’s community. She samples a line saying “rise up” under distortion so as to sound like it is far away, or from a radio. The vocal line continues to build before pulling back again, starting over in creating that momentum, though it ends without reaching any definitive climax.

Gradual builds continue throughout the album, creating a pattern of soft valleys with quiet lyrics that climb into mountainous choruses, where IsKwé’s voice takes centre stage. The use of synth, occasional guitar, and electronic drums create an almost synthetic natural landscape that resembles a northern terrain with the complex geography of the Canadian Shield.

Most songs keep a typical club-like dance beat, but brought to a slow groove that can pull on the head and the heart but do not quite move the feet. Listening to this album with headphones, or something that offers detailed articulation for each noise, shows the overall shape and ambience best. The sounds IsKwé uses give colour and character to each song, as there is not a ton of variance in song structure, but instead more exploration of soundscapes.

The album picks up at “Disturbed,” finally kicking into a full dance beat. The single “Nobody Knows,” keeps up the quicker rhythm, and comes through with more vocal intensity than any song before it. Things are brought back down in “Sometimes,” before ending on a sweet note that changes tone from the rest of the album ever so slightly. Vocal lines shift away from the gentle to the soaring, ending in a consistent, driving low and loud murmur.

IsKwé is currently on tour after releasing the new album, and said she will be in Winnipeg later this year for a show.